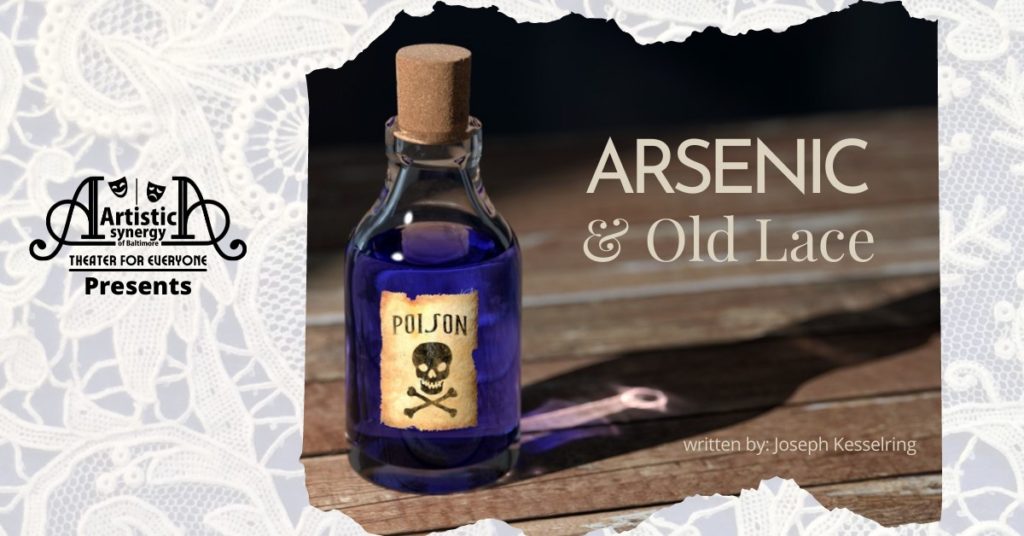 We never know what’s going on behind the closed doors of our neighbors, and sometimes that’s a good thing. Appearances can be deceiving and unintended mayhem can ensure when people have a skewed view of society. We get a peek behind the closed doors in Artistic Synergy of Baltimore’s latest offering, Arsenic & Old Lace by Joseph Kesserling, Directed by Sarah O’Hara in her Directorial Debut along with Assistant Director Bill Bisbee, and we get a glimpse into the quirkiness and accidental sins of our seemingly gentle neighbors. 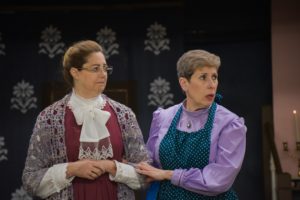 In a nutshell, Arsenic & Old Lace concerns itself with Abby and Martha Brewster, two spinster sisters who run a boarding house for lonely elderly men and kill them to ease them of their loneliness, while having good Christian burials for each victim. When their nephew, Mortimer, finds out about their murders, bedlam breaks out. Throw in a brother who thinks he’s Teddy Roosevelt, another brother who has just broken out of jail with his friend, and a girl-next-door (literally) fiancé… you have the recipe for a wacky story that could only happen on stage or film.

Sarah O’Hara takes on double duty as Director and Set Designer, and, I must say, this may be the most impressive Set Design I’ve seen at Artistic Synergy, yet. The use of space was well thought out and, while at first thought, Arsenic & Old Lace may have been a bigger show that the ASoB allows, but Sarah O’Hara brilliantly worked out nooks and crannies, entrances, and exits that move the story along and are aesthetically pleasing, making for a very successful design. Kudos to O’Hara for this creative and practical design.

While making sure the show looks good, O’Hara also takes the reigns of this production, with the help of her Assistant Director Bill Bisbee. Taking into consideration this is O’Hara’s debut as a Director, I feel comfortable saying she is well on her way. She seems to have a good grasp on the piece, mentioning she had performed in a production from her high school years. It’s an interesting choice of O’Hara to give the audience what seems like her entire, lengthy resume during the opening curtain speech, but, perhaps she feels she needs to make up for being a first-time Director? Her reasoning for choosing this piece because it’s a vehicle for leading older women, is admirable and she should be applauded for this choice. Regardless, the blocking was splendid and there were no major traffic jams on the stage allowing the actors to move freely about the stage, casting was  fitting, and overall the production ran smoothly. A little more work with individual characters/actors may have improved the overall production, and attention to the subtle comedy, some of which was lost by glazing over the punchlines, may be able to prevent the forced laughter from the crew (let the piece speak for itself) but, again, overall, it was pleasant to experience and a well thought out and well put together production. 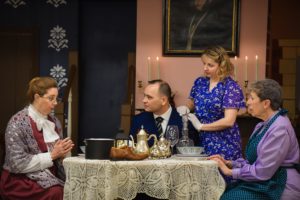 Moving on to the performance aspect of this production, as this is quite the ensemble piece, it’s worth mentioning this ensemble works very well together and gives 100% effort. This is a stellar cast and all working hard to move the story forward. Bryan Brown and Chloe Scully set the mood with as Officer Brophy and Officer Klein, respectively, bring a levity that carries throughout the production. It’s difficult to understand Scully through a thick accent, but it’s still easy to follow along with the story. Jim Morgan takes on triple duty with three different, but important roles as Rev. Dr. Harper, Mr. Witherspoon, and Mr. Gibbs. He takes these three characters and give them individuality giving a splendid performance.

Christopher Pence takes on the role of Jonathan Brewster, the gangster of the family, and he does wonders with this role. He has a great stage presence and booming voice that carries throughout the theatre. He knows this character and makes choices that make him believable. Jonathan’s sidekick, Dr. Einstein is played by Michael Maistros and Maistros seems to embody this character portraying all his insecurities, dullness, and nervousness near perfectly. Though his German accent could use some work, he does a splendid job, overall, and he and Pence have a good chemistry, making for worthy performances. 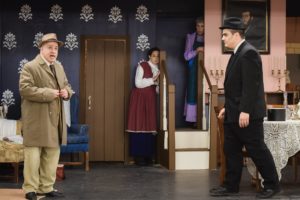 Mike DeNicolis as Teddy Brewster is a riot. DeNicolis takes this whacky character and makes it his own. He’s not afraid to make a fool of himself (a sign of a true and dedicated actor) and does so with gusto. At times, it was difficult to understand his dialogue, but, in a way, it helped his character work. Kudos to DeNicolis for a praise-worthy performance.

Lou Otero as Mortimer Brewster, the man trying to keep everything together, seems to have a good understanding of this character, and he works well with the material given to him, but there was a certain sarcasm and urgency that was lacking in this performance. Overall, he does a terrific job bringing this character to life, but I’m wondering if a little more nuance work could have been done to take him to the top. Many of the punchlines and one liners were thrown away or glazed over and it may have made it more effective if they had been hit instead of passed over. Again, that’s not to say Otero did a bad job, because he most certainly did not. It’s clear he’s giving 100% effort, is comfortable on stage, and knows how to use his space. Jennifer Otero as Elaine Harper (Lou Otero’s real-life wife) is a good match for this particular production, though Jennifer Otero does seem a bit stiff in the role. She knows her lines, knows her blocking, and executes both beautifully, for the most part, but perhaps a bit more character work would help boost her performance. Overall, she prevails with this character and both Lou and Jennifer Otero should be applauded for jobs well done. 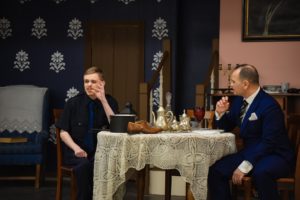 A highlight of this production is Cory Bauer as he takes on the role of the passionate playwright wannabe, Officer O’Hara and he hits the nail on the head with his performance. He makes the most of the time he has on stage and really seems to have a good grasp of the character. Along with Bauer, LaVar Betts takes on the role of Lieutenant Rooney and he, too, gives a strong, impressive, albeit brief, performance.

On a side note, Betts is also taking on double duty as Music Director, though I’m not sure how much time needed to be taken on music. Betts does play live keyboard/piano throughout the production, but most times it seemed to be a dinging in the background as if someone’s phone was going off in the middle of the performance. Perhaps this bit in the production could be re-evaluated? 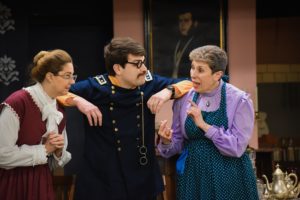 Out of the ensemble, Beverly Serio Edwards as Abby Brester and Marianne Sohn as Martha Brewser are the standouts in this production. These two performers have a great chemistry, leading me to believe they were actually a couple of spinster sisters, and they work well off of and with each other. Both Edwards and Sohn know their characters and make these roles their own. They lead the ensemble beautifully, and the quirkiness of the Brewster Sisters is evident and shines through. They’re performances seem effortless and they are certainly the ones to watch in this production.

Final thought… Arsenic & Old Lace is a fun, frolicking classic that should be experienced. This ensemble at Artistic Synergy of Baltimore has a solid understanding of the piece, doesn’t take it too seriously, but seriously enough to keep it funny and relevant. The production value is excellent and well thought out, overall. For a first time Director (who has a good grasp of the piece), the production is smooth and it’s a pleasant experience. If you haven’t yet, get your tickets!

This is what I thought of Arsenic & Old Lace at Artistic Synergy of Baltimore… what did you think? Feel free to drop a comment!