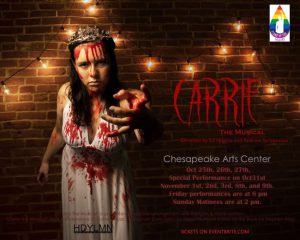 Carrie the Musical starts with a glimpse at the way that it will end. Sue is covered in blood, under an interrogation light, and bodies are strewn across the stage or hanging in the back corners. Stand Up for Theatre pulls the audience right into the scene of devastation and into caring about Sue and her story. Making the audience care about the characters is what this production of Carrie the Musical, Directed by Ed Higgins with Music Direction by Brandon Seehofer and Choreography by Lenore Florez, does the best. There is an incredible amount of heart on display in this production, with each performer truly giving it their all and embodying this world. Unfortunately, the production does suffer from some technical missteps that can be jarring. However, overall, what the end product lacks in polish, it makes up for in passion.

Because Carrie discovers her telekinetic powers in the course of this story, Carrie the Musical calls for some technical tricks that don’t quite deliver in this production. When Carrie moves a stool, an arm is scene pulling the wire from behind the platform. A falling cross doesn’t really translate as being telekinesis. Although Billy is shown hanging in the beginning scene, that never actually happens during the prom massacre. The cabinet in which Carrie is pushed doesn’t have a back, which really pulls away from the intense scene with her mother. Some other tricks, like the cup on the table, do work well – but, when the technical falters, it does lessen the impact of what are some pivotal moments.

The other technical issue that is the most troubling is the sound balance. Modern scores, like Carrie, were written for an age in which performers use microphones. They were not written to be belted at all times. Sometimes, in a small space and with softer backing tracks, this can still be pulled off. However, between the complexity of the score, the acoustics of the room, and the volume of the backing tracks, the performers in this production should have been using microphones. The end result was often one of two things. In some cases, the soloists were hard to hear over the music. In other cases, pushing too hard to go over the music sounded like screaming or just went flat.

Despite the technical mishaps, this was still an overall compelling evening of theatre due to the strong acting performances of the cast. Every member of the ensemble created a unique and different character and stayed consistently in the moment. Director Ed Higgins did a good job in creating staging that gave life to classroom and crowd scenes by having realistic, but not distracting action, going on across the stage. The reactions of the teenagers in these situations was so spot-on that is seemed spontaneous and genuine.

The story is told by Sue Snell (Sarah Mackin). Mackin is one of the performers that is best able to navigate around the sound issues in order to showcase her beautiful voice. She does an excellent job of bringing Sue’s conflicting emotions to life in both her line delivery and her subtle nonverbal reactions. As her boyfriend Tommy Ross, Anthony Case has a lovely quality to his voice and a genuine likeability that showcases the softer side of Tommy. As her mean-spirited and spoiled best friend, Chris Hargensen, Triana McCorkle oozes with viciousness and plays the perfect mean girl. A truly standout performance comes from Jake Schwartz as Billy Nolan. He really commands attention on the stage and demonstrates a real skill at adding comedic moments. Schwartz brings a level of polished nuance to his performance that is next level.

As Carrie White, Michaela Saul definitely has the hardest vocal challenge. Navigating the sound issues and the score ultimately proves difficult for her in places. That being said, her acting performance is absolutely top notch. Even when she comes out for her curtain call, she is still sobbing and emotionally drained from literally giving every inch of her inner self to Carrie’s intense breakdown. Saul is able to capture both Carrie’s naïve innocence and her deep pain as she immerses herself in the role. Causing much of Carrie’s pain is her mother, Margaret White (Jenifer Hollett). Hollett gives an unnerving performance. She says and does horrible things with an innocent and wide-eyed look on her face. It is a very effective character choice that really ups the intended unease felt in her scenes.

In the midst of all the crazy, the true heart of the show is Lenore Florez as Lynn Gardner. Her performance is absolutely captivating. She knows how to command attention, make the audience fall in love with her, and then push the scene’s attention to another performer. She demonstrates a sophisticated level of technique in both her acting and vocal performance. She is both inspiring and genuine. “Unsuspecting Hearts” is easily the perfect embodiment of the level of real emotional connection that is what worked best in this production.

While Stand Up For…Theatre may have some technical issues to polish and perfect as they move forward, they are definitely not lacking in talented and passionate performers. Carrie the Musical tells a story that, although larger-than-life, is largely relatable. These actors, with their relatable performances, find and bring to life the people in the story – and, ultimately, it is caring about these people that matters most.

This is what I thought of Stand Up for Theatre’s Carrie the Musical… What did you think? Please feel free to leave a comment!

Carrie the Musical will play through November 9 at Chesapeake Arts Center, 194 Hammonds Lane, Brooklyn Park, MD 21225. For tickets, call the box office at 410-636-6597 or you can purchase them online.