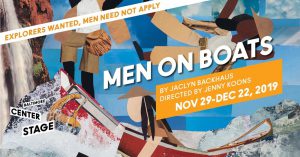 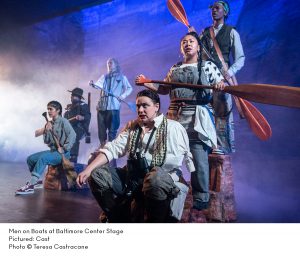 Some could argue that adventure is in our nature. We want to know what’s around the bend and some even see it as a duty. Years after we became an independent nation, there were still many areas of this vast land that were uncharted but a handful of brave people decided it needed to be done. One of those stories is told in Baltimore Center Stage’s latest offering, Men on Boats by Jaclyn Backhaus, Directed by Jenny Koons. It’s a story of aforementioned adventure, the unknown, fighting spirits, and history that is told and sometimes skewed as the years go by.

In a nutshell, Men on Boats covers the Powell Geographic Expedition of 1869 where expedition leader Major John Wesley Powell, under the direction of the U.S. government, was to chart the Green and Colorado Rivers and was the first time anyone besides Native Americans traversed the entirety of the Grand Canyon. Through many trials and tribulations, the expedition was a success and settled into American history. Men on Boats is unique that there’s not one male to be seen and told with a humorous lean. 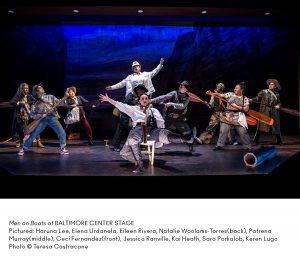 Scenic Design by Stephanie Osin Cohen is more of an insinuation and it works beautifully for this piece. Cohen uses a huge, beautifully painted backdrop of a canyon that transports the audience to the natural wonder and glory in which this story takes place and the use of simple but effective props and set pieces helps tell the story and keep it moving along. Just as with the Scenic Design, Lighting Design by Stacey Derosier and Sound Design by Elisheba Ittoop work in tandem to set the moods of each scene and the attention to detail from both Derosier and Ittoop transforms the space into the isolated, uncharted area and puts the audience smack-dab in the middle of it all. Kudos to all, Cohen, Derosier, and Ittoop for their splendid efforts for this production.

Hahnji Jang’s Costume Design is on point and adds authenticity to this humorous but true story. Each character has his (her) own individual style, but when all together, fits into a smooth and wonderful design. 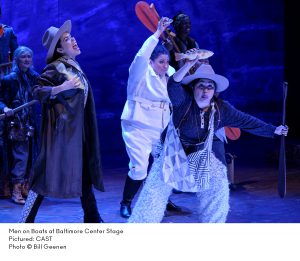 Taking the helm of this production is Director Jenny Koons, who clearly has a deep comprehension of this material and has presented a polished production that is to be commended. Her staging is near flawless and the pacing is spot on, especially in the action bits where the group of adventurers are bravely forging the uncharted waters. The challenge of having women represent men may not be as challenging as it was in the past, but there’s still a certain challenge and Koons has stepped up to the plate and knocks it out of the park. With her guidance and understanding of the text, she presents this story with a seriousness that enhances the humor that’s weaved throughout making for a charming and enlightening evening of theatre. Koons should be applauded for her work on this production. 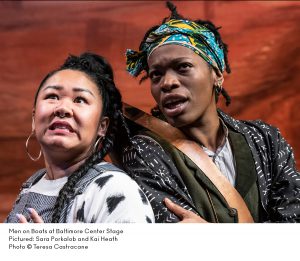 As for the performance aspect of this production, this entire ensemble brings this story to life with dedication and 100% effort making for a clean, polished production. They all have a tight grasp on their characters and make them their own with authentic portrayals and natural delivery. They all make the intense physicality of the staging seem effortless and all should be applauded and commended for their work on this production. Kai Heath as Hall, the group’s main cartographer with an air of optimism, and Sara Porkalob as Hawkins, the crew’s curmudgeon but caring cook, bring much of the humor with their curmudgeon but faithful, caring characters. Their comedic timing is splendid and they have a great chemistry between them for being such contrasting characters and both have a strong presence on stage making for delightful performances.

Bringing a certain wisdom, Haruna Lee as the reserved but observant Old Shady interjects with quips and song the keep the group moving forward and Lee seems to embody this character and makes him likable even though he doesn’t say much. She gives off a strong, silent type vibe and works perfectly for this role. Patrena Murray as John Colton Sumner, a brave and able adventurer who brings his own brand of wisdom, shines in this role. She plays him in a way that easily shows both his hardened personality as well as his gentler, kind side and Murray is to be applauded for her authentic portrayal. Elena Urdaneta takes on the role of Bradley, the youngest and most wide-eyed of the adventurers, and her performance is both charming and inspiring. She understands her character’s objectives and moves forward through the performance with purpose. Urdaneta’s portrayal puts you in Bradley’s corner from the start and, overall, she gives a strong, confident performance. 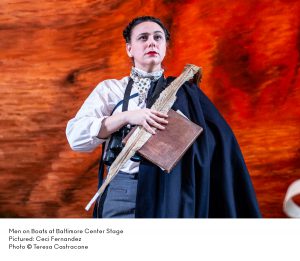 Ceci Fernandez as John Wesley Powell, the confident and optimistic leader of this expedition, and though her portrayal has a tendency to go over the top, at times, Fernandez has a tight grasp on what this man is about. Aside from the camp, which she is good at, she plays Powell with a balance of sincerity and comedy, that enhances the story and keeps it interesting and she should be commended for her efforts. In the same vein, Jessica Ranville tackles the role of William Dunn, the more practical and skeptical crew member who loses faith in the expedition that causes rifts. Ranville knows this character and understands the material well making for a praise-worthy performance overall. Her chemistry with the ensemble is top-notch and moves the action and story along nicely. Along with Powell, Dunn seems to be the heart of this expedition and both Fernandez and Ranville clearly understand this and should be applauded for their strong, solid performances.

Highlights of this production are Keren Lugo as O.G. Howland/Tsauwiat and Eileen Rivera as Seneca Howland/The Bishop. As the Howland brothers, these two are seemingly the antagonists of the story, but there’s a certain quality Lugo and Rivera put into these characters that bring out their considerate and caring sides. The chemistry with each other and their cast mates is spot on and they have a great understanding of the characters they are portraying. They are absolutely hilarious in their portrayal of the chill, level-headed Native Americans who help the adventurers along. The dialogue is funny enough, but their delivery and on point comedic timing had me laughing out-loud making for a delightful performance from both. Kudos to Lugo and Rivera for robust and confident performances, overall. 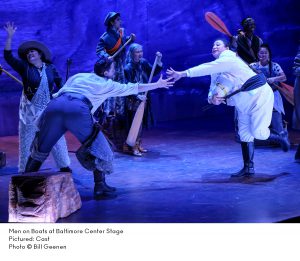 Final thought… Men on Boats is fun look at a very real event in history and told from a very unique point of view. As with any theatrical telling (or any telling from anyone who doesn’t have first-hand experience), who knows what really happened on the Powell Geographic Expedition of 1869, but you don’t need to be a history buff to enjoy yourself with this production. With an apt ensemble comprised of all female performers taking on the roles of men it takes a minute to adjust you quickly get pulled into the story because of the talent and efforts of these fine performers. There are bits of hoke but it’s balanced with points of poignancy that makes for a delightful evening of theatre. From the Set Design, to Costume Design, to performance, this is a well put-together, polished production that settles nicely in Baltimore Center Stage’s season and one you won’t want to miss.

This is what I thought of Baltimore Center Stage’s production of Men on Boats… What did you think? Please feel free to leave a comment!

Men on Boats will play through December 22 at Baltimore Center Stage, 700 North Calvert Street, Baltimore, MD. For tickets, call the box office at 410-332-0033 or you can purchase them online.