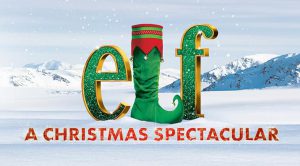 It’s that time of year, again, when even the most jolliest of Christmas enthusiasts are saturated with holiday shows and reviews. If I see one more adaptation of A Christmas Carol, it may be my last. However, ‘tis the season, and it’s to be expected so, I trudge on. At least there are a couple of new holiday shows that have come to light in the last few years and Tidewater Player’s latest venture, Elf the Musical, with a Book by Thomas Meehan and Bob Martin, Music by Matthew Sklar, and Lyrics by Chad Beguelin, is a modern holiday show with a fresh look on how we see the holidays. This production is Directed by Laurie Sentman Starkey, with Music Direction by Stephanie Carlock Cvach, and Choreography by Carissa Lagano.

Briefly, Elf the Musical is based on the film Elf, starring Will Farrell and James Caan, featuring the likes of Bob Newhart, Ed Asner, Mary Steenburgen, and Zoe Deschanel. Buddy the Elf is actually a human who was mistakenly brought back to the North Pole and raised as one of Santa’s little helpers but has always felt like he didn’t belong. The truth is discovered and Buddy travels to New York City to find his real father, meeting a slew of characters along the way including a Stepmother, a stepbrother, and a love interest, all while keeping his cheerful elven charm and humor about him. 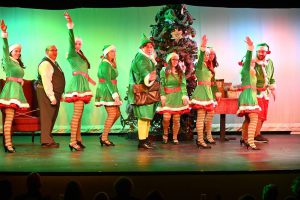 The cast of Elf the Musical. Photo: Tidewater Players

Overall, the production value is good, but though there is a minimal set consisting mainly furniture pieces with a few larger pieces, some of the scene changes were a little clunky and the vamp of recorded music was not synced up as well as it could be making it more of an annoyance than a distraction. Speaking of recorded music, it really did nothing for this production. Admittedly, I’m not a fan of canned (recorded) music for live theatre productions, but I can understand the need for it. Without a live orchestra, the recorded music seems to suck the energy out of this production even though the performers are keeping up a good pace.

Music Director Stephanie Carlock Cvach seems to have had her hands full with this score. It doesn’t help that the music and lyrics are a bit elementary and kitschy but, what can you do with a holiday show except throw some camp at it? Sometimes less is more. Though most of it is performed nicely, there are a few spots that could have had a few more rehearsals with both featured soloists and the entire ensemble. There are times when the cast seems to be out of sync not only with the music but with each other and it jolts the audience out of the magic. Some performances are better than others, but overall, Cvach seems to do her best with the material she’s given. 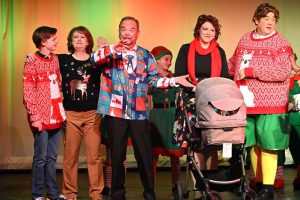 The cast of Elf the Musical. Photo: Tidewater Players

Carissa Lagano tackles Choreography in this production and though appropriate, it’s a bit on the lackluster side. The movement seems to be all over the place at times but the cast seems to be enjoying themselves and it gets a splendid reaction out of the audience. I could see what Lagono was going for, and it has the potential to be marvelous, but again, it could be the material she has to work with. In general, Lagano does a terrific job and, just like the music, with a few more rehearsals, her choreography has the potential to shine. 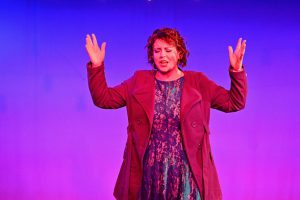 Laurie Sentman Starkey takes the helm of this production and aside from a few clunky scene changes, it is a good showing, overall. She seems to understand the material and presenting an adaptation of a popular and loved film is challenging, not to mention that the holiday aspect. She balanced the comedy and poignant bits nicely and though apparent, her character work might be delved into a bit more. She keeps the pacing beautifully but the ending seems rushed and frenetic. Regardless, Starkey presents a well rounded, charming production.

Moving on to the performance aspect of this production of Elf the Musical, it is absolutely clear that this entire ensemble gives 100% effort, like Samantha Jednorski, who takes on multiple roles and makes each of the individual and engaging, and all are having a blast working with each other. They work hard and should be commended for their efforts, each and every one of them.

To name a few, taking on the roles of Buddy’s human family, Bob Willenbrink, Eva Grove, and Michael Amhein portray Walter, Emily, and Michael Hobbs, respectively, and all give good showings. The strongest of the three would be Eva Grove who gives a charming performance as the wife of a workaholic who is trying to get her husband to spend more time with the family. She makes the most of her stage time and makes the role her own. 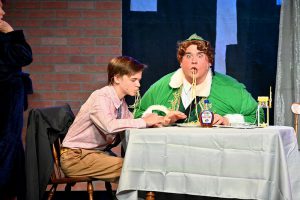 Tackling the role of the cynical Jovie is Amanda Lynn McDowell and though her character is supposed to be deadpan through most of the story, McDowell may have taken it a bit too far at times. This could be actor choice or direction, but it didn’t add any variety to her role. Vocally, McDowell has a stunning lower range and shines in her featured numbers such as “Never Fall in Love With an Elf” and “A Christmas Song.” Dicky Mahoney takes on the main role of Buddy the Elf and seems to be having a great time with the role and his jovial energy is consistent throughout the production. In the same breath, it seems, at times, Mahoney is trying too hard and it comes off as insincere with wide eyes and yelling the dialogue. However, overall, his performance is delightful, if not out of place, and he’s giving his all with a great presence, making for a strong, confident performance. 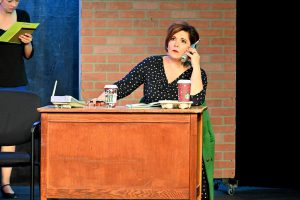 A definite highlight in this particular production is Lisa Standish who takes on a supporting role as Deb, Walter Hobbs loyal and efficient assistant. She has a good comprehension of her character and play her with a flawless balance of seriousness and comedy. Her delivery of the dialogue is natural and her gestures and mannerisms make the character believable from the start. She has a strong stage presence and seems to embody this character. She gives a superb vocal performance, especially in her featured numbers such as “In the Way” and “The Story of Buddy the Elf.” Standish is to be commended for her work and effort in this production.

Final Thought… Elf the Musical is a delightful, modern holiday romp that is sure to become a classic. It’s definitely family-friendly with enough “grown up” jokes to keep all of the adults engaged throughout. Though it doesn’t have the same oomph as the Will Ferrell film, it still pleases the audience and gets the message of the real meaning of Christmas across. Tidewater Player’s has a lot of heart and it’s easy to see their folks are giving 100% effort on stage and are truly enjoying themselves. The production has its flaws, is a little haphazard in spots, and tries too hard in others, it’s still a fun and funny production that will please the entire family.

This is what I thought of Tidewater Players’ production of Elf the Musical… What did you think? Please feel free to leave a comment!

Elf the Musical will play through December 8 at Tidewater Players at The Cultural Center at the Opera House, 121 N. Union Street, Havre de Grace, MD. Purchase tickets at the door one hour before show time or purchase them online.