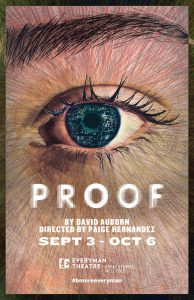 Mental illness and care seems to be in the forefront these days, as well it should be. For too many years, we’ve turned a blind eye to mental illness and it hasn’t done us or those who suffer any favors. It’s all around us and sometimes it’s a little too close for comfort especially when it’s a family member and even more so when it’s a parent. Everyman Theatre touches on these topics and more in their 2019-2020 season opener, Proof by David Auburn, Directed by Paige Hernandez. 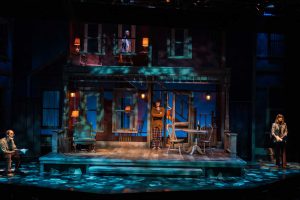 In short, Proof concerns itself with Robert, an unstable but famous mathematician, his daughters Catherine, who has cared for him for years, Claire, a well put-together adult living her own life, and Hal, a former student turned professor. After Robert’s death, Catherine has to deal with her capricious emotions, her estranged and level-headed sister, and the blossoming affections of Hal. All this on top of 103 notebooks her father left behind in which Hal hopes to find valuable work. During this long weekend, Catherine has to figure out what or how much of her father’s mental instability or genius she has inherited.

It’s an important piece in the way it portrays a family in distress because of mental illness and the uncertainty it brings to surviving members of the family and the questions it raises. It also highlights the tendency to think women are not as apt in fields such as science and math that is still, unfortunately, prevalent thought in today’s modern society. However, it also helps to begin to answer not all, but a few questions such as inheritance or propensity of mental illness and how women are actually quite apt with unlimited ability in the world of math and science. Though almost 20 years old, this play is still as relevant and though-provoking as when it was first written. 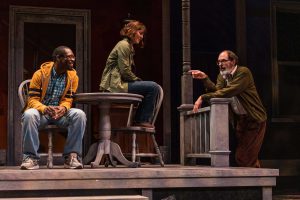 Set Design by Daniel Ettinger has done it again and it’s not big surprise. His design is both modern and practical but transports the audience to whichever location he chooses. The stage is no longer a stage, but the back porch of an old Chicago home that needs a little TLC but is livable and homey. The aged furniture adds to the feel and overall notion of what Ettinger was going for and this design is top-notch.

At the helm of this production is Director Paige Hernandez, who happens to be an Everyman Resident Company member, as well. It’s clear Hernandez has a deep comprehension of this material and has presented it in an easy to follow and authentic manner. The characters are fleshed out and polished and the staging is natural and smooth, making for a near flawless production. It’s clear Hernandez knows her way around the stage as well as in guiding a successful production. Her vision is clear and makes for a successful and strong production. Kudos to Hernandez for her efforts. 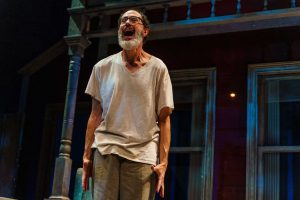 Moving on to the performance aspect of this production, it’s worth saying this small quartet of actors are perfectly cast for their roles. They each have a tight grasp on their characters and work quite well with and off of each other making for a solid ensemble to tell this poignant story.

Resident Company Member Bruce Randolph Nelson tackles the role of the unstable genius, Robert. Nelson takes this role and completely makes it his own with every subtle move and facial reaction making for a natural, real portrayal of a troubled man. His delivery of this dialogue is effortless and he portrays this character as someone you feel comfortable with, regardless of the situation. Robert is both fatherly and child-like and Nelson’s portrayal is nothing short of impeccable as he tackles this tough, emotional role. 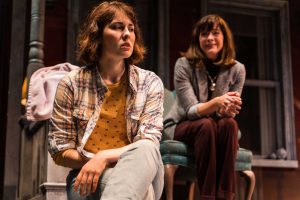 Another Resident Company Member, Megan Anderson as Claire, the older, stable sister knocks it out of the park with her portrayal. She’s what I would think of as any overly helpful, condescending older sister would be. For a bit of trivia, Anderson actually tackled the role of Catherine a few years back, so, she has a good grasp on how Claire should be reacting to Catherine and it shows. Her character work is splendid and she gives a strong, confident performance overall. 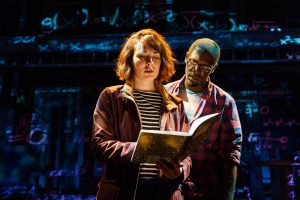 Jeremy Keith Hunter takes on the role of Hal, the former student who is searching through 103 notebooks to find something of value from his former teacher. Hunter fits nicely into this role and plays it authentically with just the right amount of comedy and poignancy. His comedic timing is on point as is his ability to switch into more dramatic material seamlessly. He understands this character and his place in this piece and plays it to the hilt.

Katie Kleiger as Catherine is a standout in her portrayal. A new Resident Company Member, she comfortable in this role giving a strong, confident performance and a polished portrayal. Her grasp of the character is apparent and her delivery is natural and smooth making for a solid performance. The chemistry between her and the rest of the ensemble is authentic and makes for a tight presentation of this characters relationships with the other characters. Overall, Kleiger becomes this character and portrays her uncertainties, conflicts, happiness, and crisis beautifully and delicately that makes for a praiseworthy performance.

Final thought…  Proof at Everyman Theatre is a poignant, thoughtful look at a family relationship and dynamic and how it is effected by mental illness. It also touches on the misogyny that still exists in the sciences and scientific fields but handles both mental illness and the misogyny delicately and powerfully. The Set Design is superb, the staging is near flawless, and the small ensemble is perfectly cast with an abundance of chemistry that adds an authenticity to the entire production. This is quite the opener for Everyman Theatre and I, for one, can’t wait to see what the rest of the season holds. Get your tickets now as you don’t want to miss this well put-together, polished production.

This is what I thought of Everyman Theatre’s Proof… What did you think? Please feel free to leave a comment!

Proof will play through October 6 at Everyman Theatre, 315 W Fayette Street, Baltimore, MD. For tickets, call the box office at 410-752-2208 or you can purchase them online.