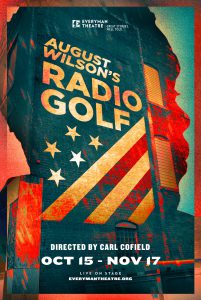 Radio Golf, directed by Carl Cofield, now playing at Everyman Theatre, is the final installment of August Wilson’s Pittsburgh Cycle. This is a series of ten plays, each set in a different decade, that depicts the African American experience in the twentieth century. All of them are set in Pittsburgh’s Hill District except for one. 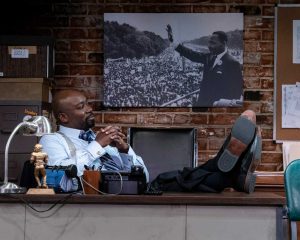 The play follows successful real estate developer Harmond Wilkes (Jamil A.C. Mangan) in his bid to become the first Black Mayor of Pittsburgh. The entire play is set in Harmond’s campaign office in the Hill District, where he is involved in a neighborhood revitalization project. Set Designers Christopher & Justin Swader have captured the feel and look of the office as though it were transported from the Hill in 1997. They capture every detail from the hanging lights and block glass windows to the combination of brick and distress plaster walls. I especially like the open ceiling displaying the steel girders, paying a nice homage to the Steel City. 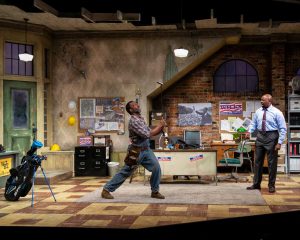 Wilkes is joined by his business partner Roosevelt Hicks (Jason B. McIntosh) and his wife and campaign manager Mame Wilks (Dawm Ursula). Hicks is his high school friend and the Vice President of Mellon Bank, as well as his primary investor. There plan is to raze a block to build a high-rise apartment complex with upscale shops. His plans quickly go awry when he discovers that he does not own all of the property on the block. Additionally, he is met with some neighborhood resistance from Sterling (Anton Floyd) and Elder Joseph Barlow (Charles Dumas). Harmond is left with the dilemma to tell his partner and stop the project, or to move forward and become the neighborhood savior thus helping his campaign. 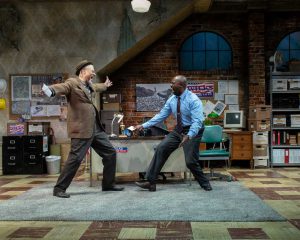 Cofield was a perfect choice to direct this production. He has a thorough knowledge and understanding of the material and his actors have embraced his vision. Cofield brilliantly brings to life both the comedy and the drama that Wilson has penned and makes his characters real and believable. “Although Radio Golf is set in 1997, August Wilson saw into the future and started this conversation around life in America for upper-class Black folk,” says Director Carl Cofield. “How important is success if you’re denying and destroying your family’s history and culture in order to get it? It’s a modern examination of what the American Dream means today and has huge resonance in Baltimore and other urban centers.” 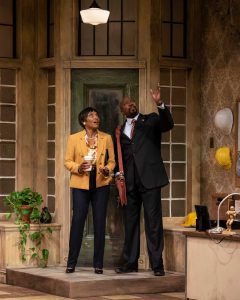 Resident Company Member Dawn Ursula was fun to watch as Mame Wilks. She proved that behind every great man is a great woman. She stands by her man and you can feel the love she has. She is also not afraid to remind him that she is a strong independent woman who is destined for greater things. Ursula does a wonderful job acting both sides of her character.

My two favorite characters were Sterling Johnson (Anton Floyd) and Elder Barlow (Charles Dumas). Floyd is that slap in the face that brings you back to reality that we all need. While he may have fractured a law or two (he just wanted to know what it was like to have some money), he has a clear sense of right and wrong. His delivery is fresh, pointed and he is a joy to experience. Floyd gives the attitude needed to play Sterling. I can’t wait to see him in another production. Dumas gives a performance you don’t want to miss. He is the paternal, soft, loving sage that we all have somewhere in our families. He reminded me of my own mentor. I would ask him a question and he would talk for twenty minutes, the whole time never answering my question. Then, two or three days later, a light would come on and I’d realize what he meant. Dumas’ performance is that way. As much as I enjoyed watching him, it was days later that I finally appreciated him. He is slow, steady, and powerful and will keep you thinking about him days after the show. I challenge you to follow him closely. There is wisdom behind what he says and does. Pay close attention to his reaction to other performers. 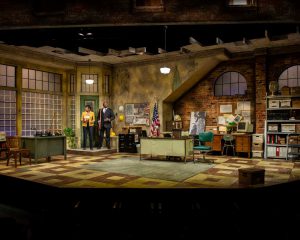 Jason B. McIntosh (Roosevelt Hicks) and Jamil A.C. Mangan (Harmond Wilks) are perfectly cast to play against each other. McIntosh does an excellent job as the comic relief as well as the man on the rise. His performance is focused and crisp. He sees an opportunity and he goes for it. One of the underlying questions in the play is whether or not Hicks is being used. McIntosh does an excellent job keeping the question unanswered. He goes with the flow, yet you can see him pause to think when challenged. I thought he gave a compelling performance to support either side without giving a definitive answer. From the opening scene Mangan shows that the stage is his. His deep, loud voice grabs your attention and keeps you entranced throughout the production. You firmly believe that he has worked his way to the top and he is a man to respect. Mangan takes you along with him as he experiences a myriad of emotions. His acting has you quickly feeling for him and going through his struggle together with him. Mangan has the ability to make you feel as though you have been in his shoes. A truly phenomenal performance.

This is what I thought of Everyman Theatre’s Radio Golf… What did you think? Please feel free to leave a comment!

Radio Golf will play through November 17 at Everyman Theatre, 315 W Fayette Street, Baltimore, MD. For tickets, call the box office at 410-752-2208 or you can purchase them online.