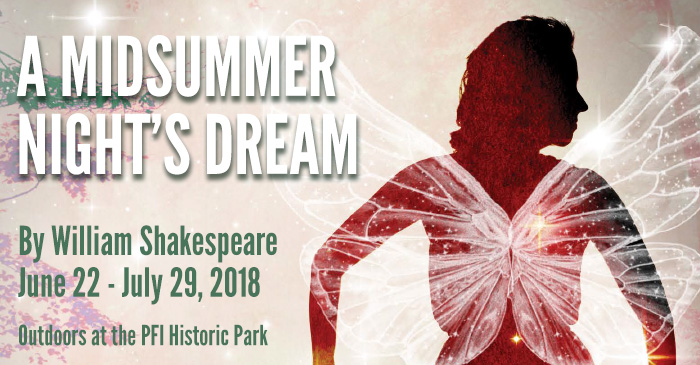 Running Time: Approx. 2 hours and 30 minutes with one 15-minute intermissions

William Shakespeare is not everyone’s cup of tea, but his work has well outlasted him and is being produced regularly throughout the world so, he must have done something right. His stories are timeless and can relate to anyone in any era which is what, I think, helps the longevity of his work. The comedies are my personal favorite, but, that’s just me, and Chesapeake Shakespeare Company’s latest offering, A Midsummer Night’s Dream, is on top of my list so, I went in with lofty expectations. However, this production, Directed by Gerrad Alex Taylor did not disappoint in any way. 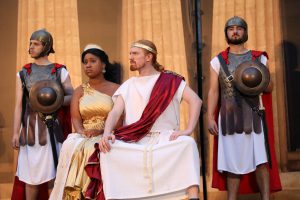 Briefly, A Midsummer Night’s Dream is a fanciful triste through the city and wood of ancient Athens. A young woman, Hermia, is betrothed to one noble man, Demetrius, while in love with another, Lysander, who just so happens to be in love with her. Bring in Helena, who is in love with Demetrius, but the feelings are not mutual. Enter the Fairy King, Oberon, and Fairy Queen, Titania who are having their own lover’s quarrel, and a sort of practical joke including dew from a certain plant that makes a person fall in love with the first person they see after waking up. Throw a little troublemaking imp named Puck in the mix and you have a farcical comedy that has lasted hundreds of years… for good reason.

Designing a set for an outdoor setting can be challenging but Daniel O’Brien’s Set Design is impeccable as it is simple. Not calling for much in the way of scenery, O’Brien has managed to turn this small corner of space in the midst of “ruins” of a building at a historic park into the solid and larger than life Athens, as well as a blissful and fanciful forest in which fairies and imps romp, all with the opening and closing of two large canvases. It works beautifully with the piece and adds great value to the production as a whole. 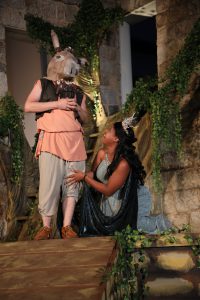 For Costume Design, Heather C. Jackson chose to keep it traditional with colorful flowing robes and sashes that work extremely well for this traditional setting. Her design is well thought-out and the ensemble seems comfortable in their wardrobe which helps the overall performance of the piece. It’s apparent she’s familiar with the both the era and the fanciful theme and it shows in her impeccable design.

Gerrad Alex Taylor take the reins as Director of this production and it couldn’t be in better hands. His choice to use a traditional setting is wise and takes everything back to basics. So many companies like to adapt and modernize Shakespeare’s work (which I’m all for), but it’s good to see that the traditional setting still works and works brilliantly. Taylor has a strong comprehension of the material and his whimsical and fantastic vision is clear in every scene. The pacing is on point and the staging is engaging every step of the way. Taylor also takes on double duty as Fight Choreographer and he hits the nail on the head with this aspect, as well. Each fight is finely tuned and exciting making for an overall delightful experience. Kudos to Gerrad Alex Taylor for a superb production.

Moving on to the performance aspect of this production, I’d be amiss if I didn’t mention that the entire ensemble did their part and performed with 100% effort. It’s easy to see this cast is comfortable with each other and their chemistry is second to none. 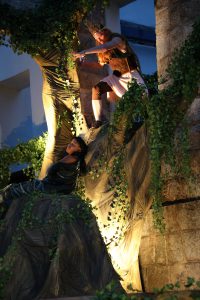 Michael Toperzer as Oberon and Elana Michelle as Titania shine in these roles, as well as their takes on the characters of Theseus and Hippolyta. Their interaction with and off of each other draw the audience in and Toperzer and Michelle portray the complex relationship between Oberon and Titania beautifully and with confidence making for intense and engaging performances from both.

Christine Watt as Peaseblossom, Abigail Funk as Cobweb, and Sydney Thomas as Mustardseed are the perfect complement to Elana Michelle’s Titania and these three play their characters to the hilt. They, too, work well with and off of each other to create a tight circle that moves the dialogue and story along nicely. All three actresses are well rehearsed and well suited for their roles.

The story revolves around two couples, mainly, and Nina Marti and Rafael Sebastian portray Hermia and Lysander, the two forbidden lovers. Marti is a firecracker and as the script states, “…she’s fierce, even though she’s little.” and that’s exactly what she is. Marti has a tight grasp on the text and performs it effortlessly while Sebastian, too, portrays Lysander with just the right amount of innocence and a young man’s lust making for commendable performances from both. 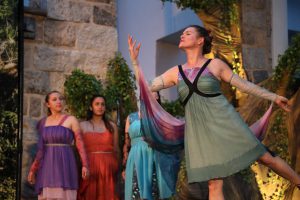 The other unfortunate couple, Demetrius and Helena, are portrayed brilliantly by Nick Fruit and Kate Forton. Though their characters start out as anything but a couple, through a little bit of magic and luck, they end up happily joined. Fruit plays the uppity Demetrius well with confidence and grand gestures but also understands and does well with the slapstick that is required of the character. Likewise, Forton is stellar in this role. She completely embodies this character and it’s easy to see the love and passion she has for this character and the piece as a whole. She has a strong stage presence and gives a natural, seemingly unscripted performance that makes her a highlight in this production. Fruit and Forton work well off of each other and their timing is flawless making for a delightful and strong performance, overall. 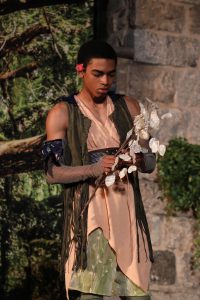 Young Imani Turner, still in high school, tackles the role of Puck, the little trouble making imp who doubles, at times, as narrator of this story. This young actor is a true talent and his instincts and natural ability are apparent as he portrays this comedic character with just enough mischief for him to irritate but with a mix of a bigheartedness, one cannot help but like this character. His delivery and comedic timing is on point and I’m looking forward to seeing more of his work in the future.

The Athens acting troupe, also known as The Rude Mechanicals consist of Colin Connor as Peter Quince, Brenden Edward Kennedy as Francis Flute, Tim Neil as Snug, Owen Halstad as Robin Starveling and the casting of these gents is superb. All of them comedians and the performance of their featured part, the play within a play called Pyramus and Thisby will have you rolling in the isles. It can be seen as the play that goes wrong, and it was one of the most enjoyable moments of theatre I’ve encountered this season. Connor, Kennedy, Neil, and Halstad show off their comedic timing and slapstick abilities impeccably and have the audience roaring with laughter. This crew is certainly a highlight of the production. 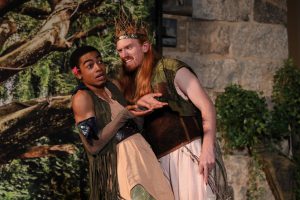 Another member of this troupe is standout Jose Guzman as Nick Bottom. Seemingly a vain and obtuse character, Guzman plays Nick Bottom to perfection. Guzman has a complete grasp of the text and plays it over the top, but not so over the top as to be annoying… just the right amount. Guzman is a force to be reckoned with onstage with a strong stage presence and a natural comedic ability. You can’t miss him in any scene he is in whether he is speaking or pantomiming in the back and his delivery is spot on. He’s certainly one to watch in this particular production and I can’t wait to see future performances from this actor.

Final thought…A Midsummer Night’s Dream is not a show you want to miss this season. The production is top-notch in every aspect and the setting couldn’t be more picturesque. From the scenery to the staging to the performances, this production of a Shakespeare favorite will not disappoint and makes for an absolutely delightful evening of theatre. The thought and care that went into this performance is apparent and the actors, who are giving 100% of their effort and passion, make this a successful retelling of this classic comedy that will have you doubled over, laughing, and engaged every step of the way. Get your tickets now!

This is what I thought of Chesapeake Shakespeare Company’s production of A Midsummer Night’s Dream… What did you think? Please feel free to leave a comment!