George Santayana once wrote, “Those who cannot remember the past are condemned to repeat it.” We must always learn from our history and experiences and move forward. Much has been written about the African-American experience but near the top of the list is Randallstown High School’s latest offering, A Raisin in the Sun by Lorrain Hansberry, Directed by Lydia West with Assistant Director Marc Stevens and Student Assistant Directors Blossom Onwubiariri and Lukas West, presents this deep look into an average African-American family right smack-dab in the middle of the 20th century and their trials and triumphs as family. 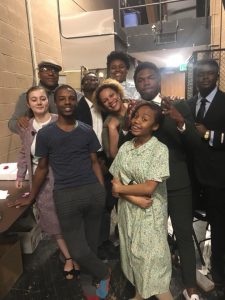 The Cast and Director of Randallstown High School’s A Raisin in the Sun. Credit: Tracey Lanier Thompson

In a nutshell, A Raisin in the Sun tells of the experiences of the Younger family, a poor, but not destitute African-American family in the Washington Park neighborhood in Chicago. Lena, the matriarch of the family receives a $10000 life insurance payout after the death of her husband and it’s a chance for the Younger family to better themselves and give themselves a fresh start. Lena thinks the only way the family is going to move forward is to move out of Washington Park and into a new neighborhood where she puts a down payment on a home and they soon discover they might not exactly be welcomed by the current, white residents. After leaving the responsibility of the rest of the money to Walter Lee with one stipulation of putting aside enough for his sister’s schooling, things take a dark turn and the cold hard truth hits the family hard.

Set Design Anyah Morgan is quite impressive and authentic using the vast space of the Randallstown High School stage wisely. Morgan’s design really gives the feel of a small apartment occupied by more people than it should and, though a unit set, it’s two levels keep the setting interesting and practical. Set Construction by Mr. Thompason Theatre Tech Class (led by Kaila Dangerfield) are to be applauded for their detailed and superb work.

Lydia West, who is no stranger to Baltimore theatre and took a superb turn as Beanatha in this particular performance, has taken the helm of this production as its Director, with Marc Stevens as Assisant Director and Student Assistant Directors Blossom Onwubiariri and Lukas West, and their efforts are to be commended. West and her Assistant and Student Directors seems to have a complete grasp of the Hansberry’s text and her interpretation is easy to follow. The pacing is good and her casting is spot on. It’s always a challenge to present a classic and well-loved piece to a new audience but West and Stevens has stepped up to the challenge with success.

Moving on to the performance aspect, it’s easy to see this entire ensemble gives 100% to this production. Taking on supporting roles, Hope Wells takes on the role of as Mrs. Lindner, the representative of the neighborhood to where the Youngers are planning to move and Warren Boyd portrays Travis Younger, the young son of Walter Lee and Ruth Younger. Wells, though hard to understand at times, makes the most of her time on stage and has a great presence and is confident in her performance. Boyd completely embodies the 10 year-old Travis and has great chemistry with his cast mates giving an admirable performance, overall.

Kalia Leach tackles the role of Ruth Younger and, though I only had the opportunity to see a small sample of her work, she seems to have a good understanding of the character and her frustration with her husband and pulls the part of nicely, overall.

Beneatha, young single lady of the crew is being courted by two young gentlemen, George Muchinson and Joseph Asagai, played admirably by Mekkhi Stevens and Abraham Olaleye, respectively. Both of these young actors give dedicated and confident performances and have great stage presence which works well for these particular characters.

Rounding out this cast is Kaodi Gerry-Ofor as matriarch Lena “Mama” Younger and Caleb Leach as Walter Lee Younger. Both of these young actors, though scripted at times, have a great understanding of the trials and tribulations of these poignant characters and portray them nicely. Gerry-Ofor has a great confidence and plays Lena as a gentle soul, as she should be portrayed, making her a character the audience is able to connect with from the moment she steps onto the stage. Leach gives the challenging character of Walter Lee just enough angst and frustration to make him believable and relatable, as well as a character for whom the audience sympathizes with and roots for. Both of these young actors give praiseworthy performances.

Final thought… A Raisin in the Sun is an important piece of theatre not only because it’s a well written piece that all students of theatre to which all students of theatre should be exposed but it’s a piece that delves into the mid-century African-American experience in America. The kids at Randallstown High School bravely took on the task of presenting it and it has, hopefully, open their eyes to the continuing struggle of people in this country today. The production is well put together, the ensemble is dedicated, and the performances are commendable making this a thoughtful evening of theatre.

This is what I thought of Randallstown High School’s production of A Raisin in the Sun… What did you think? Please feel free to leave a comment!

A Raisin in the Sun will play through April 8 at Randallstown High School, 4000 Offutt Road, Randallstown, MD. Tickets may be purchased at the door.

1 thought on “Review: A Raisin in the Sun at Randallstown High School”