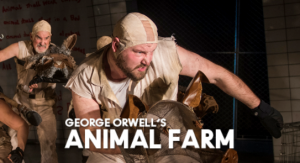 Originally written as a novel in 1945, the world was in a post war era and still scared of its own shadow with fresh memories of the atrocities of WWII. Countries didn’t trust each other and disagreed on how to run things. Orwell wrote this allegoric tale in criticism of our once recent allies, the Soviet Union and Stalin, in particular. In this day and age, I can’t help but thinking of the quote from author Alan Moore (V for Vendetta) stating “People should not be afraid of their governments. Governments should be afraid of their people.” It’s a quote that would have done well for the characters of Baltimore Center Stage’s latest offering, George Orwell’s Animal Farm, adapted by Ian Wooldridge and Directed by May Adrales. This adaptation is spot on and brings on all the frustration and turmoil that exists in this story. It is a story every generation should see, hear, read, and understand as to protect not only themselves, but the future generations, yet to come. 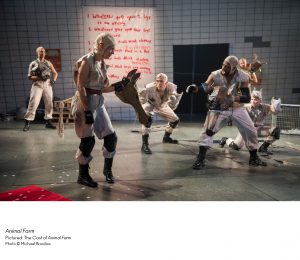 In a nutshell, George Orwell’s Animal Farm uses animals and the setting of a farm to explore how communism and absolute power effect different classes of people and how something starts off as good for the whole ends up diluted and people (or pigs) get power hungry and human (or animal) nature takes over to turn it into something bad. For instance, those in charge create the “rules” but change them to suit their needs and actions, as needed. As the old adage goes, “absolute power corrupts absolutely.” And when a people blindly follow, they end up too deep in a situation to change it… or to feel as though they can change it.

The Scenic Design by Andrew Boyce is creative and appropriate for this piece. Being a unit set with various props keeps the attention on the text and action but adds to the oppressive and industrial feel of the entire production. The audience feels as though they are sitting in an old, dirty warehouse or slaughter house and it fits perfectly working in tandem with the Lighting Design by Noele Stollmack and Sound Design by Nathan A. Robers and Charles Coes. Stollmack works with the Scenic Design flawlessly, creating the mood of uncertainty and giving us backlighting and dramatic foot lighting to emphasize certain points of the text and characters. All the while the original compositions and Sound design create a mood of desperation, especially with the hymn “Beasts of England” with its blend of despair and hope all in one. 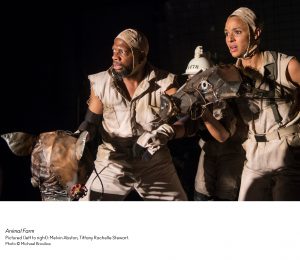 Costume Design by Izumi Inabi is a particular highlight of this production. Inabi has taken on the challenge of a production filled with humans playing animals and has risen to that challenge. Instead of dressing the actors head to toe as animals, Inabi has cleverly and creatively built costumes to insinuate animals, effectively, without bogging down the actors in heavy material, giving them room to work. More like puppetry, the costumes wisely consist of a base white overall while adding animal head puppets to portray each animal character and this also allows the members of this small ensemble to switch between animal characters easily and seamlessly. Overall, Costume Design is top notch and Inabi is to be applauded and commended for her impeccable design. 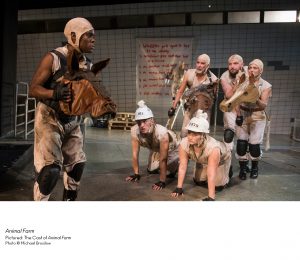 It’s worth mentioning that Ian Wooldridge’s adaptation is spot on. Being one of Orwell’s shorter novels, Wooldridge manages to cover all the main points without omitting or adding too much. In a cool 90 minutes, he manages to tell the story in its entirety. He also captures the oppression and blind loyalty in his text, as well as the change made of those in power and he writes in such a way that is easy to follow making this (I don’t mind saying) one of the best adaptations of a novel I’ve seen in quite awhile.

May Adrales takes the reigns of this production and her Direction and vision for this piece is clear making for some powerful and intense theatre. Adrales clearly has a thorough comprehension of the material and has guided this ensemble to tell this story effectively and unabashed. Her casting is superb and the staging keeps the story moving along nicely at a great pace while making sure to hit each important plot item. Staging a new, adapted production of a well-known novel can be tricky, but Adrales seems to have had no problem whatsoever and has given us a meaty, brilliant piece of theatre.

As for the performance aspect, the small ensemble works well together to bring this story to life and each individual actor delves into their animal character (all playing at least two characters during the production) making the audience forget these are actual animals but helping them see the humanity (whether or good or bad) in each character. 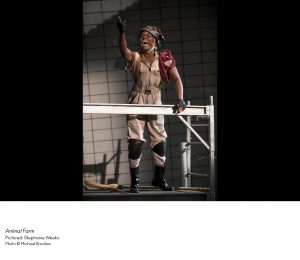 Napoleon, played by Melvin Abslon and Squealer, portrayed by Tiffany Rachelle Stewart, are the main pigs in charge of Animal Farm (the name given to the farm after the exile of Mr. Jones) and both of these actors play their characters to the hilt. They must be doing a bang up job because I find myself absolutely despising these two at the conclusion. Abslon (who adeptly takes on various roles, including that of a preaching crow named Moses) completely embodies the role of Napoleon and plays him with a certain dignity and grace one might not expect of a pig, but also has such a great, booming stage presence, this character, the leader, fits him perfectly. 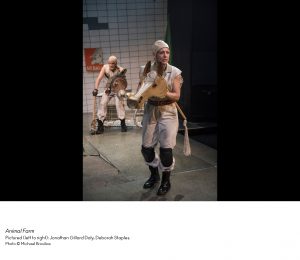 While Abslon is large and in charge, Tiffany Rachelle Stewart takes on the role of what seems to be the #2 pig in charge, keeping tabs on everyone and making sure everything runs smoothly… in accordance to what the pigs want. While Stewart does a fantastic job as the voice box for the leader, I found her portrayal a bit annoying and though the character is written as an annoyance, Stewart played this up more so than it should be. Her jerky movements and idiosyncratic noises throughout the production just grated on the nerves, but, in her defense, it works to make her character more intolerable. Overall, her performance is effective, if not aggravating. 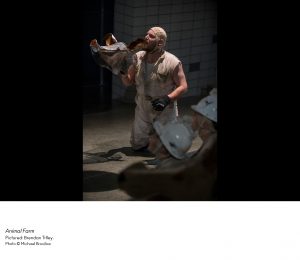 Brendan Tilley as Snowball, makes a great showing and gives a strong performance, as a betrayed pig who is exiled, just as the farmer was, and is turned into public enemy #1. Tilley’s stature helps him create a character with a big presence and one of authority and he has a good grasp on the necessity of this character and his place in the story and this makes for a commendable performance. Along those same lines, Jonathan Gillard Daly, who tackles the role of Benjamin, the old, curmudgeon donkey who questions the actions of the powers that be, knows exactly what his character is about and how he fits into the story. Daly takes on various roles (namely that of the humans in this piece), and does a splendid job transforming from his animal characters to his human characters. He is confident and comfortable on the stage and gives Benjamin a certain sense of balance between the clever pigs in charge and the workers (of whom he is one of the few who can read well). Both Tilley and Daly add value to this production with their character work and understanding of the material. 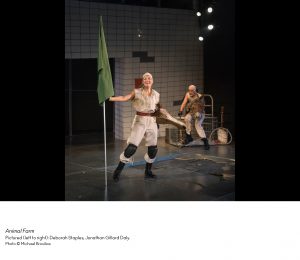 Deborah Staples as Clover, the young mare (though in the novel, she’s a bit older) and companion to Boxer, and Stephanie Weeks as Major, the former leader of the pigs, and Boxer, a work horse, are definite highlights of this production of Animal Farm. Staples plays Clover as an unsure character who knows something is awry, but also unsure of what to do about it. Much like many people throughout time who stood by out of fear or ignorance when things were going bad. Staples completely embodies this character and it is easy to connect with her as I would venture to say we’ve all been in her shoes at one time or another. She’s comfortable on stage and has a strong presence making for a stellar performance. 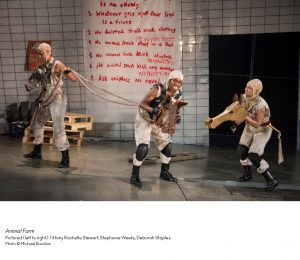 The other standout, Stephanie Meeks, starts off with a bang as Old Major, the boar who is the leader of not only the pigs, but all the animals on the farm and her monologue rallying the animals into rebellion is inspiring. You can see in her eyes the emotion and the heartache in her performance, especially when she begins the hymn “Beasts of England,” with a very impressive low, guttural alto that fits this character and the mood perfectly. Meeks’ turn as Boxer is just as impressive as she has a full grasp on this character and exudes the blind loyalty that leads to pretty much nowhere. It’s frustrating for the audience to see but she also emits a certain hope in her performance that gives the audience a light at the end of a tunnel that makes for an outstanding performance.

Final thought…  George Orwell’s Animal Farm at Baltimore Center Stage is everything an adaptation of this novel should be. Especially with the uncertain times we live in today, it captures the frustration of those who are blindly loyal and presents an uncomfortable truth about the rise of power and the changes those who apart of that upswing go through. It sends the message that, pardon the cliché, that the grass is not always greener on the other side and, absolutely represents the time in which Orwell wrote Animal Farm with the fear of communism and the worker’s plight. The performances are spot on and the production is well through-out and presented impeccably. You don’t want to miss this production this season so, get your tickets directly.

This is what I thought of Baltimore Center Stage’s Productions’ production of Animal Farm… What did you think? Please feel free to leave a comment!

Animal Farm will play through April 1 at Baltimore Center Stage, 700 North Calvery Street, Baltimore, MD. For tickets, call the box office at 410-332-0033 or you can purchase them online.