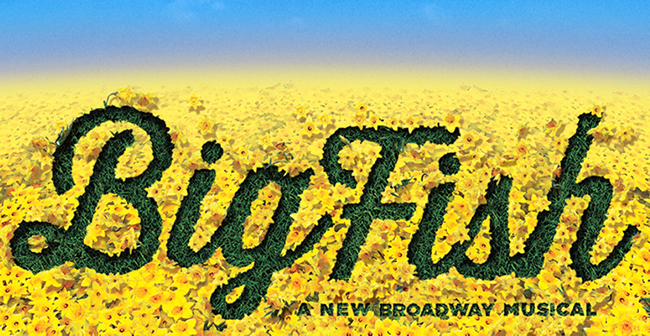 Running Time: 2 hours and 30 minutes with one Intermission.

If you’ve ever wanted to be someone you’re not or wanted to do things you think you can’t do, usually, you make up big beautiful stories in your head, to help you, to get you by, or just to take yourself away for just awhile. In Silhouette Stages latest offering, Big Fish, with Book by John August and Music & Lyrics by Andrew Lippa, Directed by TJ Lukacsina, with Music Direction by Michael Tan, and Choreography by Rikki Lacewell – this is exactly the case. This 2013 Broadway musical adaptation of a 1998 novel by Daniel Wallace and 2003 film of the same name.

Don’t be put off by this being an adaption. You don’t need to know the Big Fish movie or novel to get this show and still enjoy it. I think I saw the movie once, but can’t remember anything besides the name. I hadn’t realized a book existed until I Googled it, but that didn’t matter. John August and Andrew Lippa did their job so well that you don’t need to be familiar with the source material. 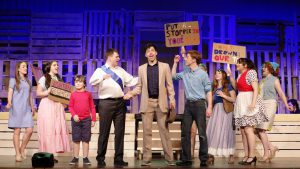 Briefly, Big Fish concerns itself with Edward Bloom, who is a dying old man who tells improbable self-aggrandizing comical stories to his son, Will Bloom. Will finds this habit aggravating as his is a reporter interested in the historic truth and what actually happened. He responds to his father’s fatal diagnosis by digging into his father’s past, looking for historic truth amid the lies. He eventually discovers his dad has anti-skeletons in his closet including the fact he helped his neighbors rebuild after a flood. This leads him to accept his dad’s use of exaggeration and story telling to avoid talking about painful subjects.

This story is a good drama. You feel the conflict between father and son, the bitterness it causes, and the catharsis. 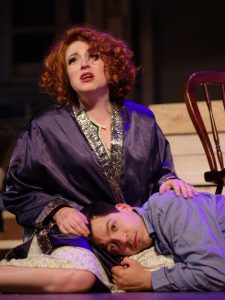 Putting it on the table, I’m a brand new reviewer, trying something new. I just see a lot of shows so I figured I’d try my hand at reviewing. I don’t play an instrument, build sets, or act. I just watch lots of plays. So umm… The Set Design by Alex Porter looked cool and the live orchestra and cast sounded great. The performers sang and moved well, including Luis Montes as Edward Bloom, Michael Nugent as Will Bloom, and Emily Mudd as Sandra Bloom, the little dysfunctional family. Nothing broke, the lights came on when they were supposed to, so, when all is said and done, the production value is top notch, but I love theater for the story telling, so I’ll focus on that.

Big Fish balances between being funny and being serious and, in the process, it tells a story about the power and purpose of the stories people tell about themselves. 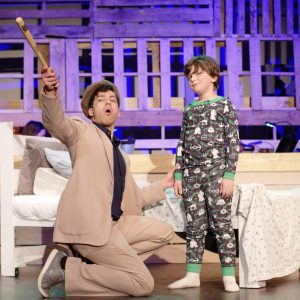 As the story of Big Fish progresses, Will finds a series of stories Edward tells about himself. These are exaggerated tall tales are funny, nonsensical, and increasingly fictional and are presented to the audience in scenes and musical numbers. For instance, Edward says he learns of his demise from a Witch (Emily Alvarado), takes up with a giant named Karl (Nick Rose), learns how to swim from a mermaid (Emily Mahovec), discovers his circus boss, Amos (Richard Greenslit) is a werewolf, and gets shot out of a cannon, among other situations.

These stories are good comedy. They’re feel good, funny, and well delivered and they blend in smoothly with the frame story’s heavier material.

For its conclusion, Big Fish ties the stories together and, finally, Will discovers the truth. His father is hiding a disappointed former sweetheart, Jenny Hill (Christa Kronser). He makes peace with his father’s casual approach to historic fact. We assume the tall tales are false. Then Karl the Giant shows up at the funeral. So what if anything was true?

Big Fish asks, “Who cares what the actual truth is?” Big Fish asks. The now enlightened Will embraces exaggeration, tall tales, and myth as modes of communication. The historic truth is no longer the only truth he cares about. 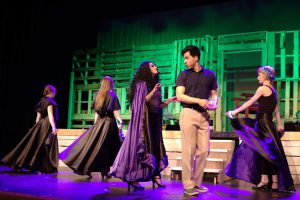 However, there’s another story that Silhouette Stages could have told and didn’t – a dark reflection of the cheerful and upbeat production they actually staged. One might also see Big Fish as a story about the alluring power of fake news. Here’s another equally true reading:

Edward Bloom has a reckless disregard for historic facts. He tells so many tall tales that maybe he doesn’t know or remember the “real truth”. He definitely doesn’t care and he just tells the story that matters to him. His son, a reporter, finds this infuriating. When Edward gets his fatal diagnosis, Will’s investigative reporting leads him to a witness, Jenny Hill, Edward’s allegedly jilted high school sweetheart. Jenny tells Will about how awesome his lying father really is.

Well… does Jenny tell the son the historic truth? Her story sounds like fake news. Did Edward really buy his high school sweetheart a house to sooth her broken heart? Oh, come on! Will suspects an affair and that sounds way more probable than the Jenny’s version. She even suggests she doesn’t want to ruin Will’s image of his father before telling him a transparent whopper. 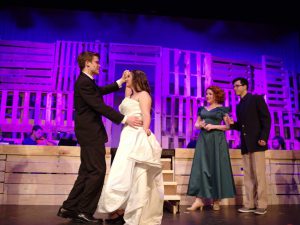 But Will accepts the tall-tale about how his dad magically moved a town without anyone posting it on the internet (Will’s smartphone actually gets used a few times as a prop and he’s got Google installed). Why? Because Will realizes that the lies let everyone get along better. He could confront his dying father and his grieving mother with the affair. But why? The truth will make everyone miserable, not free. So he says nothing and humors his dying father, like a normal well-adjusted human. The story then shows us that Edward Bloom really had a very big friend named Karl. Fact and fiction have blended and the audience can no longer tell the true story from the tall tales,  or fact from fiction. In the final scene, we see the reporter son has abandoned his dream of teaching his son to crave and search for truth and instead embraces telling tall tales to keep people happy. That’s #2018 for you. 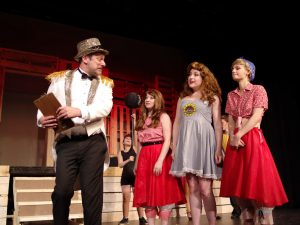 Now, Silhouette Stages and TJ Lukacsina didn’t go there and, considering the production’s superb, I’ll write that down as a good call! But you can see this darker story peaking out over the wooden stage fencing around the live orchestra’s box on stage.

Regardless of how you see this story, if you’re familiar with it or not, Silhouette Stages has put together an entertaining, well produced production that shouldn’t be missed this season! You won’t be disappointed!