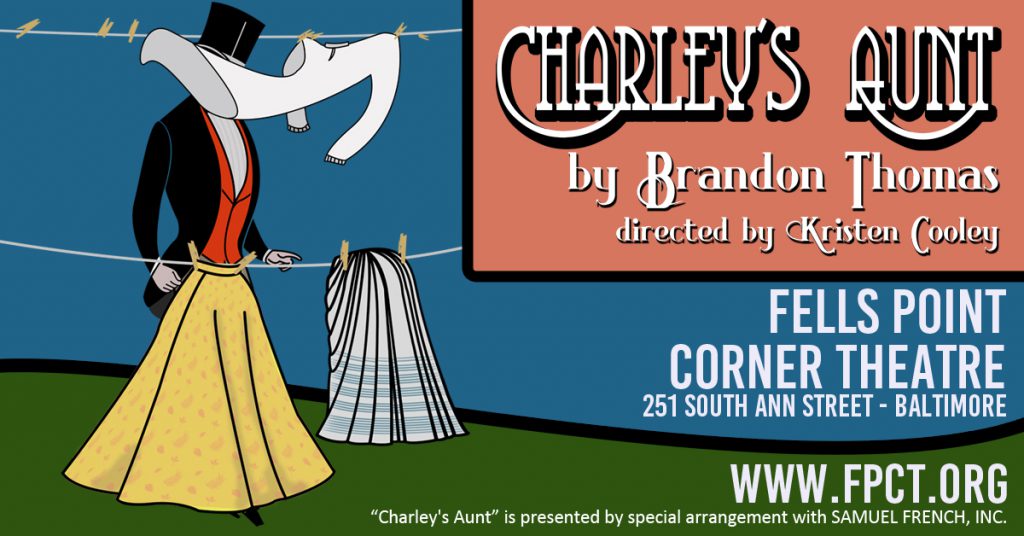 No matter which era, what the situation is, or who it is, it seems that in entertainment, a stereotypical cis male in drag brings down the house in laughter. Why? I couldn’t tell you. Real drag or female impersonation is an art and I know folks who earn a good living doing it and take pride in what they do, and I love it (I may have *ahem* even dabbled in the art form myself sometime ago), but when you throw the cheap, just-for-laughs drag into a script, it adds tons to the comedic value. Fells Point Corner Theatre’s latest offering, Charley’s Aunt by Brandon Thomas, Directed by Kristen Cooley, takes us back to a time when a man could get away with posing as a woman by simply putting on a dowdy dress… and that’s all it took. However, when you need the services of an absent aunt… you take what you can get.

Briefly, Charley’s Aunt was written in 1892 and was a smash hit in London, running for 4 years with 1,466 performances which was almost unheard of for productions of the day. The farce concentrates on Lord Fancort Babberley (or Babs, as he’s affectionately known), and his two friends Jack and Charley, who convince him to help them woo two young ladies by posing as Charley’s rich aunt, who was intended to be a chaperone but has changed her arrival date. Other problems and situations include, but are not limited to, the real aunt’s arrival and the attempted seduction of an elderly gold-digger toward the fake aunt, and a plea to give consent for two pairs of young lovers to marry. Got all that? If not, it’s a simple search on Google!

Set Design by Moe Conn is splendid and inovative as he turns the intimate FPCT stage into three locations, including interiors and exteriors. Moving walls and simple set pieces transform easily and smoothly and easily distinguishes each location perfectly. Not only mechanics, but choices of the aforementioned set pieces and colors are authentic and present the time very nicely. Kudos to Conn for a job well done.

Kristen Cooley and Barbara Madison Hauck put together a Costume Design that is on point for this production. Period pieces are always challenging, but Cooley and Madison have taken the challenge head on and have presented an authentic and fitting design that adds great value to the production. From the men in their materials of heavy materials (or at least look like it) to the elaborate gowns of the ladies, every costume is appropriate and makes each character look as though they stepped right out of the late 1800s, England.

Kristen Cooley also takes on the Direction of this piece and it’s easy to see she has a tight grasp on the text and really knows the material. Presenting such a dated piece to a modern audience is tricky, no doubt, but Cooley manages it beautifully. Her understanding of comedy and farce are apparent and her staging in this intimate space works well. She should be commended for her work on this piece. 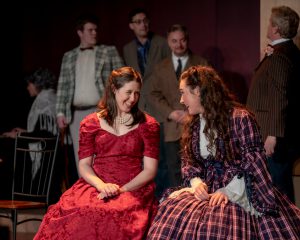 Moving on to the performance aspect of this piece, two players in supporting roles are Peter Wilkes, who takes on the role of Brassett, the poor butler of Jack Chesney and Jennifer Skarzinski who tackles the role of Ela Delahay, a young fatherless girl who has been taken under the wing of Donna Lucia. Though supporting characters, both Brassett and Ela Delahay have important purposes and keep the story moving along. Wilkes does well portraying Brassett as a loyal employee to a young, brash Jack Chesney who can only roll his eyes, have a drink, and go about his day as his employer gets himself deeper into trouble at every turn. Skarzinski has a good grasp of her character, a naïve, young girl who has a big heart and she portrays her nicely but she looks out of place in the role. She gives a great showing and has great chemistry with her cast mates, but this flaw seems to take away from the authenticity of the character. Overall, however, she has a strong presence and natural delivery making for a delightful, if not completely believable, performance.

Michael Panzarrotto portrays Colonel Sir Francis Chesney, the elder Chesney and though he makes the character likable, he plays this role a bit over the top, but in a way that it seems he’s trying to hard which takes away from the comedy. He’s confident and works well with his fellow cast mates, so, in general, he gives a decent performance and gets the character’s point across nicely. As a sort of cohort to his character, Maribeth Vogel takes on the role of Donna Lucia, Charley’s real aunt who has arrived in a kind of disguise. Vogel is splendid in this role. Her delivery of the material is natural and she seems to have a good comprehension of her character she is portraying. Her presence and confidence allow her to give a strong showing in this piece that is a joy to watch.

Jon Meeker plays Jack Chesney, a scheming, but charming young gentleman and Brandon Richards takes on the role of Charles Wykeham, a lovesick young man who hesitantly goes along with Jack’s plans, after only a little persuading. Richards knows his character and is comfortable with him but his performance falls a little flat. The urgency that is required for this role seems a bit forced and takes away from the quickness needed for this piece. His character is nervous most of the time but he portrays more of a frightened, whiny young man rather than a nervous one. He does, however, work quite well with and off of Meeker, who is the stronger performer of the two, and Richards gets the comedy of the piece, giving an overall respectable performance. Jon Meeker, a fine performance and emotes just the right amount of urgency and worry as required for this character. His movements jand delivery are genuine and he has a strong, confident presence on stage that makes for a commendable performance.

Alice Gibson as Amy Spettigue and Kellie Podsednik as Kitty Verdun are very well cast and play their parts to the hilt. Gibson is cute and flighty as the young Amy and comfortably plays her as if she stepped right out of the time in which this piece takes place. Podsednik as the more mature Kitty is elegant and poised as the character should be. She has tight chemistry with all of her cast mates and gives a strong, assured performance that is one to watch in this production. 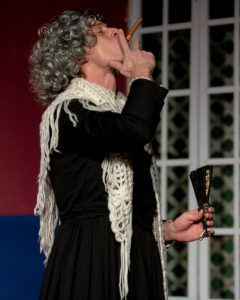 The definite standouts in this production are David Shoemaker as Lord Fancourt Babberley and Tom Wyatt as Stephen Spettigue. Shoemaker, who I’ve seen perform in more dramatic pieces, has near perfect comedic timing and understands the comedic nuances of this piece and presents them beautifully. As the aforementioned man-in-drag character, he doesn’t play this character over the top but takes it serious enough to get the humor across and he will have you laughing as he keeps a straight face throughout. In delivery and authenticity, Shoemaker is top notch and gives an impeccably funny and memorable performance. In the same vein, Tom Wyatt as Stephen Spettigue, the hard-nosed and serious uncle/guardian of the young girls will have you rolling in the isles. Wyatt takes this role and knocks it out of the park. Being almost a supporting character, Wyatt steals the show in many of his scenes with a flamboyancy that is ridiculously funny but he plays this flamboyance in a way that it is not forced making it all the more humorous. From his immaculate delivery to his gestures and facial expressions, he gives a flawless performance that is not to be missed. It’s worth noting that both Shoemaker and Wyatt work extremely well together on this piece and their chemistry and their comprehension of the comedy shine through. Kudos to both David Shoemaker and Tom Wyatt for jobs very well done.

Final thought… Comedy, when done right, is timeless and Charley’s Aunt is a fast-paced, humorous romp and farce of mistaken identity in a bygone era that’s still side-splitting funny in today’s age. Some individual performances are better than others, but this ensemble, as a whole, is a hard-working, well-oiled machine with great chemistry and a prodigious comprehension of the material. The production is polished with a creative Set Design and challenging Costume Design that is on point. Don’t let the fact that it’s a period piece deter you because this is not a production to be missed.

This is what I thought of this production of Charley’s Aunt.… what do you think?