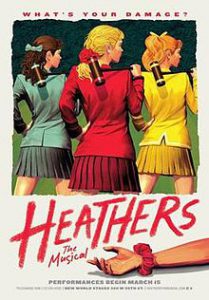 Dear Diary: I know that Heathers is that kind of cult, fringe piece that true Theatre nerds are just supposed to adore. I don’t. I find the characters flat and confusing and unlikeable. I find the script filled with some major plot holes and raunchy humor for the sake of shock. Still, the current production of Heathers by Laurence O’Keefe and Kevin Murphy at Tidewater Players almost changed my mind. Co-directors Laurie Starkey and Austin Barnes (along with Music Director R. Christopher Rose and Choreographer Leslie Perry) seemed to be very mindful of some of the concerns and limitations with the script and really found ways to appeal to a broader audience. Strong performance after strong performance worked to make this show appeal to a broad audience. So, if you are thinking about giving Heathers another chance, this is the production with which to make that happen. Conversely, if you are already a fan of the show, this production is certain to be the “Big Fun” that you are looking for; it has all the hallmark trades of the cult classic mixed with some new, multi-dimensional spins on the characters.

Some of the things that I was left wondering after some past productions of Heathers are: Why should I care about Veronica Sawyer? And why the heck does she care about Jason “J.D.” Dean? Rylynn Woods and Gabriel Webster provide those answers. Woods’ Veronica is multi-layered. Even as she becomes caught up in evil schemes from all directions, her heart and her human longing is vividly on display in this performance. Even when Veronica is making some major mistakes, the vulnerability and transparency that Woods lets hang out for display in front of the audience creates a compelling, raw performance. Her consistent and strong vocals also carry the show. Likewise, Webster makes J. D. more real and more layered than the character is frequently portrayed. There is a light-hearted and fun side to J. D.. There are times when he really seems to want to do more and better. Webster’s nuanced performance helps the audience understand why Veronica keeps standing by his side through other moments in which he is truly a cruel and ferocious monster. Webster convincingly alternates between madman, charmer, and tormented little boy with believability. His dynamic acting performance makes up for his occasional vocal imperfections. In the moment, where he nails before the vocals and acting, it is pure magic. Woods and Webster also have sizzling chemistry and a playful comfortability. This is evident in both “Dead Girl Walking” and “Our Love is God.”

Other characters who are often, in other productions, one-dimensional and provide little reason to like are the Heathers: Chandler (Holly Blondheim), McNamara (Mary Cate Carder), and Duke (Elise Starkey). Blondheim masters Queen of Ice, as she mocks and tortures everyone around her, and yet there are subtle moments that make the audience see that “The Me Inside of Me” may not just be a construct in Veronica’s head. She takes this caricatured villain and makes her a real, not-so-live, girl. Likewise, Starkey’s Heather Duke appears all evil, ruling with even greater cruelty when she gets the chance, but there is this moment at the end where she lets down her guard and joins the rest of ensemble. It is such a small moment played so authentically that it speaks volumes. Another one of the best moments in the show – when everything comes together (masterful acting, beautiful and haunting vocals, powerful staging and lighting) – is Heather McNamara’s “Lifeboat.” Carder seizes this opportunity and absolutely shines. Her performance is spectacular throughout the show with well-timed comedic one-liners paired with emotional depth. As good as they are all separately, the Heathers are also dynamic together. Tight harmonies and crisp synchronicity of choreography makes for a memorable “Candy Store.”

Another standout is Emily Caplan in the role of Martha Dunnstock. Once again, the directorial vision of this show is clear in her portrayal. This is the kind of script in which it can be so easy to leave the characters as one-dimensional caricatures. However, Starkey and Barnes clearly made sure to tease out the emotional depth of each character and to cast actors that were able to handle that level of complexity. Caplan is no exception. Her Martha is not just weak, not just a victim. There is strength and hope even in her darkest moments. Her rendition of “Kindergarten Boyfriend” is light on the surface and brimming with pain just underneath. Caplan gives a perfectly restrained performance. Rather then over-singing or over-acting, she lets the vocals and the heart flow effortlessly.

All that being said, sometimes a little – or a lot – over the top is necessary. There is honestly nothing in the script that provides Nick Castillo (Kurt) and Henry Jester (Ram) with emotional levels for their characters. These characters are pure id, pure unlikeable, and pure comic relief. Castillo and Jester definitely deliver on all fronts. Their timing, chemistry, and comic delivery is up there with any of the great comedic duos. They also show off great physical comedy skills especially in their slow-motion fight scene and their final moments on stage. Equally delightful are the pairs’ fathers: Brian Ruff (Ram’s Dad) and Phil Hansel (Kurt’s Dad). “My Dead Gay Son” is a big, fabulous, hysterical number, and Ruff takes his moment voraciously. He has a natural presence and charm on stage that lights up this number.

Overall, the ensemble was solid. They were especially strong as a vocal ensemble with the harmonies often being noticeable and accurate when they joined as group. At times, the choreography was a little muddied, but overall enthusiasm and energy made up for any missed steps. Two standouts in the ensemble were Elias Courtney (Hipster/Officer McCord) and Lamar Leonard (Preppy/Officer Milner). Their bit as the officers was extremely well-delivered and memorable. Courtney also made an impression with several perfect one-liners throughout the show, and Leonard was especially memorable in his standout 80’s dance moves.

The final star of the show was the lighting design by Thomas Gardner. Different colors were used with great intentionality to highlight emotions and mood in different scenes. This was just another layer of the strong design and vision in this production. Tidewater Players’ Heathers is a well-constructed performance with lots of strong and realistic character portrayals. Whether you love the show or weren’t a fan before today, take a step back to being “Seventeen” and check out this production.

This is what I thought of Tidewater Players’ production of Heathers the Musical… What did you think? Please feel free to leave a comment!

Heathers the Musical will play through March 3 at Tidewater Players at The Cultural Center at the Opera House, 121 N. Union Street, Havre de Grace, MD. Purchase tickets at the door one hour before show time or purchase them online.