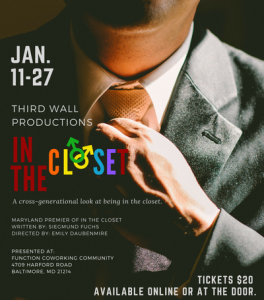 Everyone copes with things differently and there’s really no “right” way to cope with any situation that may come your way. There are fighters, there are flighters, there are talkers, and those who shut down into themselves, but, again, there’s no right way to deal with things. When bad things happen in someone’s life, he or she must find his or her own way of coping. In Third Wall Productions‘ latest offering, In the Closet by Siegmund Fuchs, Directed by Emily Daubenmire, gives us an interesting take on a coping mechanism that may or may not be relatable to many but makes one think about how we all are individuals in dealing with crisis in our own lives.

In the Closet concerns itself with John, a young man who has just had relations with another man for the first time, an old man dealing with the illness of his husband, a middle-aged man dealing with getting older and a community with which he doesn’t relate anymore, and a 20-something man who is a victim of rape and told he must act straight on the stand in court, all in a metaphorical closet to which they’ve escaped because of these varied reasons. Throughout, the older men are working to get John to walk back out of the closet by discussing experiences each have been through, good and bad, as well as trying to explain what the closet is. Will they be able to get John out of the closet or will they all be stuck there forever, not being able to face the real world or themselves? In the Closet forces us to ask ourselves what would we tell our younger selves about our lives and what would we ask our older selves, if we had the chance?

Author Siegmund Fuchs has given us a well put-together script and tells an interesting story making for a pleasant evening of theatre. His dialogue is natural, for the most part, though there are a few bits where the wording probably looks better on paper than it sounds coming out of an actor but, overall, it’s a solid, thoughtful script. His characters are fleshed out well and their individuality and similarity are subtle but clear in the dialogue. Each character is going through his own turmoil that makes for a diverse and engaging script. Though Fuchs’ concept is clever, the “twist” is somewhat predictable but thought-provoking, and well though-out nonetheless.

One drawback for this production, unfortunately, is Set Design by Patrick Rudai and Jordan Hollett. To make a long story short… it is too much for this space. Yes, the setting is a closet, and yes, most closets are small, however, with the amount of items on this set, including set pieces and decorations, it was very cramped and the small ensemble seemed to have trouble navigating and maneuvering around each other during the scenes, which did distract, at times. It looks great, don’t get me wrong, the authenticity and detail are apparent which is a plus for Rudai and Hollett, but it hinders the action rather than helps it and, sometimes, less is more. Overall, it’s a good design, but could be scaled back.

Taking the helm of this production is Director Emily Daubenmire and, though, overall, the piece runs smoothly, staging is a bit erratic. The set isn’t helping matters when it comes to the staging, but during certain points, the pacing of this piece comes to a near halt. Daubenmire seems to have a good grasp on this material and text but the execution is haphazard. For example, there are a few scenes in which one actor must complete a simple task but the dialogue doesn’t begin until the task is complete making for elongated moments of awkward silence that could be eliminated with simple transitioning techniques. This is not to say the entire production is messy, it’s a very well put-together production and it’s my assumption that the set has a big hand in the problems in staging, but, as the Director, Daubenmire should be watching more carefully to make sure these problems are smoothed out before opening.

Moving on to the performance aspect of this piece, H. Ray Lawson takes on the role of Man #1 (the old man) and Mike Zellhofer tackles the role of Man #2 (the middle-aged man). Lawson has a good comprehension of his character, who is the wisest of the quartet, but he does have problem with his lines, leaving long moments of silence where you can see the cogs turning to remember lines. His delivery is a bit stiff but his effort is top-notch. However, beyond these troubles, the character’s sincerity and caring shines through naturally and Lawson obviously feels deeply about this character and his portrayal us poignant and authenticity is apparent.

Zellhofer, as Man #2, has a strong grasp of his character and he has a strong presence making for an admirable performance. Though sounding a bit scripted in delivery, he still manages to bring an authenticity to the role that makes the character heartwarming and charming. His character has a sorted past, as they all do, but Zellhofer really understands the trials of his character and expresses it well. In one intense scene toward the end of Act I, Zellhofer shines in both character and delivery and makes for a shining moment in the production.

Rounding out this small ensemble are Stephen Foreman, who takes on the role of Man #3 (the young man) and Angel Duque portrays John (and even younger man). Foreman gives a commendable performance as the young man who has come to terms with his homosexuality but has endured a horrible incident that has forced him back into the closet, for the time being. Foreman has a clear grasp on his character and portrays him in a way that shows his understanding. His delivery is natural and he seems comfortable in the character making for a well-rounded and believable performance.

A highlight of the production is Angel Duque and his performance is solid with an obvious comprehension of his role. He seems to embody this character of John and portrays him with defined emotions and a sense of uncertainty that is required. His delivery is smooth, and his presence is robust, making for an enjoyable and engaging performance, overall.

Final thought…  In the Closet is an interesting take on a very personal experience that is individual to all. The production certainly has its flaws but is still a good story with a good script and, with each performance, I’m certain the wrinkles will be ironed out. Staging and some delivery of the text might need work, but the dialogue is thoughtful and weaves a multi-generational story that cleverly concerns only one person. It makes us think hard on whether or not we can forgive our past trespasses and look toward an uncertain future. In this day and age of learning to be yourself and having to have a thick skin, this is an important story that needs to be told and seen.

This is what I thought of Third Wall Productions’ production of In the Closet… What did you think? Please feel free to leave a comment!

In the Closet will play through January 27 at Function Coworking Community, 4709 Harford Road, Baltimore, MD. For tickets, you can purchase them at the door or online.