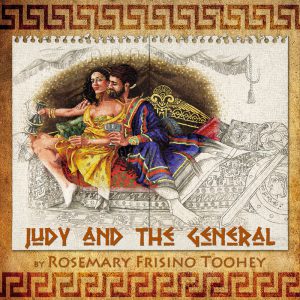 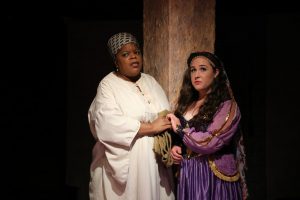 It seems no matter what time or era, women have always been underestimated, especially in biblical times. Women were supposed to act a certain way, be accepting of everything men threw at them, and docile and obedient. However… there were a few “rouge” women who weren’t having it, whatsoever. One of those women is Judith from the biblical Book of Judith which we don’t hear much about (I wonder why?) but is a great story of strength, faith, and love. Spolighters Theatre latest offering, the World Premiere of Judy and the General, by Baltimore playwright Rosemary Frisino Toohey, Directed and Musically Directed by Michael Tan, presents this epic story in an accessible, humorous telling of this intriguing and important story. 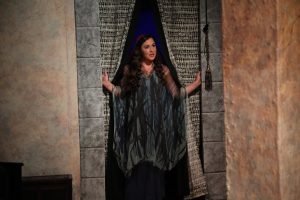 As stated, we don’t hear much about Judith today but there are representations in paintings, monuments, and song all over the world. Briefly, Judy and the General tells the story of Judith, a young girl who lives in a small farming village with her father and they seem to be on the verge of bankruptcy. She meets the very rich and very tender Manasseh and the two fall madly in love. With her newfound riches, Judith becomes quite a pill for others, especially her maid. Unfortunately, Manasseh keels over soon after and Judith is left alone. Meanwhile, a neighboring Assyrian king wants to take over the land in which the village sits and sends his best general, Holofernes. All the while, Judith has put herself in solitary confinement and has seen the light and wants to be a better person by helping others. The Assyrians and the villagers are at a standoff and Judith realizes she can use her feminine wiles on Holofernes to help her village and be a better, more pious person. 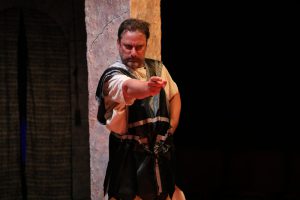 Alan Zemla’s Set Design is minimal but, as always, on point. The space at Spotlighters is intimate and in the round and Zemla knows it like the back of his hand. His use of the entire theatre is wise and opens up the production more than what the stage has to offer. His scenic art work is brilliant and he puts the audience smack dab in the middle of the ancient village and dwellings. Simple set pieces are used to represent locations and allow for smooth transitions. Kudos to Zemla for adding great value to the production. 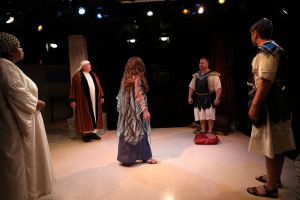 Putting new work out can be frightening, but, someone has to do it and I’m glad those “someones” do. Rosemary Frisino Toohey has given us a strong piece to mull over. Her script is spot on in all aspects including dialogue, structure, and timing. It’s witty, engaging, and tells this epic story in an accessible, witty way that is entertaining and keeps the attention of the audience. My criticism is with the music aspect. It is a musical, so, music is half the deal, but with this particular production, the music just seemed to fall flat. Don’t get me wrong, the songs are simple and sing-able, but you won’t find yourself tapping your foot or humming any of the tunes when you walk out of the theatre. Some might, but most probably won’t. That being said, the music is appropriate for the piece and it yields some cute melodies, but overall, it doesn’t make a deep impression. Toohey’s lyrics may be the biggest problem. At times they are elementary and predictable and might work better as simple dialogue than in a song. Again, that’s not to say the music aspect of this piece is bad, but it’s the weakest, especially up against a strong, intelligent script. 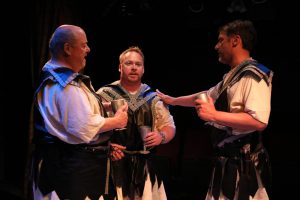 Michael Tan takes the reigns of both Direction and Music Direction of this piece and he pulls it off flawlessly. His staging works well for the space and the pacing is near perfect. He seems to have a good comprehension of these characters and this story and has presented it clearly to an audience. Directing the first full production of any piece can be daunting, but Tan has stepped up nicely. His Music Direction, too, is top-notch keeping the cast in harmony and in tune while playing along as the lone musician! Tan is to be applauded for his efforts in this well put-together production. 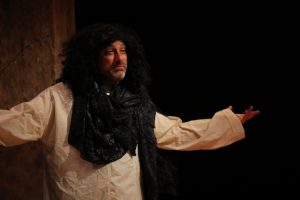 Moving into the performance aspect of this production, Wayne Ivusich and Richard Greenslit, who play multiple roles are quite an act together. Ivusich gives off such a jovial air, no matter which character he’s playing, making him a delight to watch and it works for all of his characters, including Dad, King, Head Man, and Captain. He has a good grasp on the material and presents it beautifully. Now, Greenslit… I could watch him onstage all day. He could have two lines or ten monologues in a row, it doesn’t matter because of his expressive face, it’s all a joy to watch. He’s a master of the subtle glances and side pantomimes as well as comedic timing which is required for his roles as Workman, Servant, Soldier, and Advisor. Vocally, both of these gentlemen are confident and not only sing their featured numbers, such as “The Guy in Charge” and “The Servent’s Lament, Why Can’t We Switch,” nicely, they also act them out which adds so much to the performance. 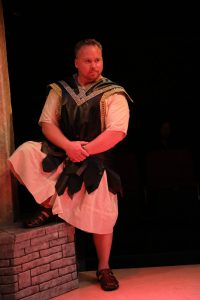 Rob Wall takes on the roles of Manasseh and Hologernes; two completely different characters – one being tender, one being hard as nails, and he portrays them both superbly.  His switch between the characters is effortless and he plays them like night and day, which is required, and he does it without a hitch. Vocally, Wall is a pro with a rich, smooth voice that resonates and is filled with emotion making for a strong, confident performance all around, especially in his featured numbers sucha s “April” and “Plunder Pillage, and Loot.”

Tackling the role of Judith (rather, Judy) is a highlight of this production, Kellie Podsednik. She is on point in her portrayal of this complex, driven woman and her gradual change from poor farm girl to pain-in-the-ass rich girl, to the pious woman she ends up being is unbroken. Because of her skill, her character at the end of the piece is completely contrasting with the character at the beginning of the piece which makes her one to watch in this production. Her high, delicate soprano is a perfect fit for this role and she knocks it out of the park, vocally, as in her featured numbers, “Closer to My Heart” and the poignant “Gone Now.” 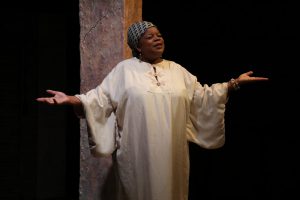 The standout in this piece is Kay-Megan Washington, who portrays Maid (Narrator), though she is called Fallacia, it may not be her actual name, but that’s how it goes when you’re a servant in biblical times, right? Washington gives a confident, effortless performance and is absolutely natural on the stage and with the delivery of her dialogue. She has a deep understanding of this story and her character and it shows in her portrayal. Her vocal skills are strong and makes one take notice, especially in the opening number, “Tale to Tell” and her humorous “A Prayer”. She’s comfortable on stage and gives a strong, confident showing. 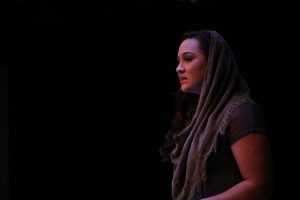 Final thought… Judy and the General at Spotlighters Theatre is a fun, lighthearted take on an epic biblical story that is not well known, but should be. The subject matter is relevant and serious but Rosemary Frisino Toohey manages to make it accessible with a witty, humorous, and well-structured script. The score, on the other hand (or beginnings of the score as this is the world premiere), is quaint and, at times, lackluster, but appropriate for this piece. Production value for this particular production is top-notch with well thought-out staging and Music Direction, a minimal but clever Set Design, and superb performances from every member of this small 5-person ensemble. Premieres can be challenging and World Premieres can be downright difficult, but Spotlighters Theatre and everyone involved in this production should be applauded for their efforts and this is certainly a production you want to check out this season.

This is what I thought of Spotlighters Theatre’s production of Judy and the General… What did you think? Please feel free to leave a comment!

Judy and the General will play through July 29 at Spotlighters Theatre, 817 St. Paul Street, Baltimore, MD. For tickets, call the box office at 410-752-1225 or purchase them online.