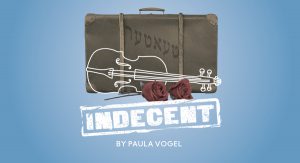 Running Time: Approx. 2 hours and 20 minutes with no intermission

What is and what is not indecent is really up to each individual but what is indecent in society changes as society grows and evolves. It’s interesting that what is looked on as no big deal today could throw a crowd of people into a rage a century ago. Much of what is on the stage today would send the previous generation reeling and Baltimore Center Stage’s latest offering, Indecent by Paula Vogel, Directed by Eric Rosen, gives us a look at how early 20th century audiences reacted to racy material that we don’t even blink an eye at today. It also reminds us that, though we may generally agree, as a society, what is indecent… in the end, it is in the eye of the beholder. 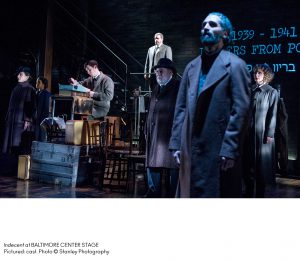 Briefly, Indecent is a historical play with music about a playwright, Sholem Asch, and a troupe of actors producing a real Yiddish play entitled God of Vengeance, by Asch in 1907 that caused quite an uproar when it got to Broadway. The play itself is a love story between two young women and was a success all over Europe (seems they weren’t as stuffy with this kind of material as America was at the time). It had to be toned down for American and Broadway audiences and even then, it was too much and the entire troupe was arrested for indecency. Throughout, the artists question what they must sacrifice for their storytelling and presentation of their art.

I’ve got to start by stating this is just a beautiful piece of theatre, all around. From Set Design, to Costume Design, to staging, and performance. I was enthralled from the moment the lights went down in the theatre and stayed engaged throughout. Vogel has weaved a splendid story that spans from the early 20th century through post World War II and she does it seamlessly. The dialogue is natural and wel thought-out and, even for someone who doesn’t have a Jewish or Yiddish background can appreciate the story itself and relate to the characters within that story. Baltimore Center Stage’s production is aesthetically pleasing, as well. Through the beautifully organized clutter on stage, a simple, yet complex story is told and pristinely performed by an apt ensemble. 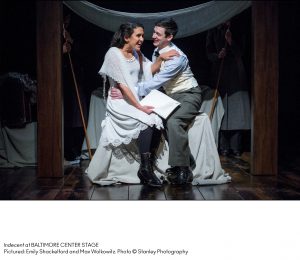 Set Design by Jack Magaw is splendid and he uses his space wisely. Looking more like the backstage of a theatre, which it should, it complements the story beautifully. Using set pieces to present different locales instead of changing the space makes for smooth transitions and doesn’t interfere with the action and staging of the production. Kudos to Magaw for a wonderful design. Running in tandem with Magaw’s design is a terrific Lighting Design by Josh Epstein that blends nicely with the production as a whole and precisely sets the mood for each scene with an overall dim look with appropriate splashes of light and emphasis.

Having a sharp eye for detail, Linda Roethke’s Costume Design is superb. She captures the time settings and is consistent as the setting moves forward in time. The design is authentic and makes these characters real, bringing the audience even more into the story.

Director Eric Rosen has really nailed it with this production. His comprehension of the material is clear and his vision is exquisite. He knows these characters and has guided this cast to weave an intriguing, enthralling story. The smooth transitions in his staging are on point and keep the audience engaged from start to finish. The omission of an intermission is wise as it would break up the beautiful momentum this piece has. Rosen’s casting is spot on and he should be applauded for his efforts in this production. 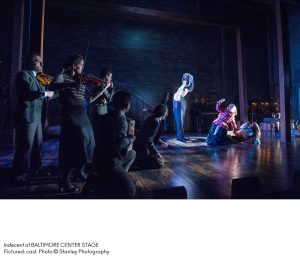 On the performance side, every single member of this ensemble gives a marvelous performance. The chemistry is fantastic and they work well with and off of each other. Victor Raider-Wexler and Susan Rome take on the “elder” roles and Raider-Wexler makes you instantly feel at ease with his smooth, clear delivery of the material and his embodiment of each character he plays such as Otto, the first producer of God of Vengeance. In the same vein, Susan Rome is brilliant in the other “elder” roles she takes on. She portrays her characters with a certain gracefulness one would expect an experienced actor to have and she transitions through her various characters seamlessly. Both Raider-Wexler and Rome give strong, confident performances that are a pleasure to experience.

Jake Walker as “The Middle,” the actor of the troupe who plays the characters who no spring chickens but not young, bright eyed and bushy-tailed gives a great showing in this. He portrays his roles confidently, especially the character of Mendel, who is cynical of this new play and its content. He looks good in the role and portrays it with the perfect balance of pretentiousness and humbleness. 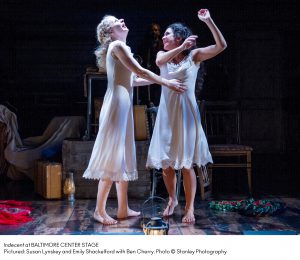 Two of the folks we see most are Susan Lynskey as The Middle/Halina and Emily Shackelford as The Ingenue/Chana. Lynskey has a great command of the stage and completely embodies her character. She plays her roles with confidence and emotes the no-holds-barred personality of them, making for a striking, emotional performance. Alike, Shackelford holds her own and portrays her characters with just the right amount of gusto and calm. These two actresses have a pristine chemistry that makes the roles work so well. It’s impressive because of the various roles these two are playing but yet, the chemistry between them is consistent and absolute in the scenes that call for it. Kudos to both Lynskey and Shackleford for exquisite performances.

Another familiar face throughout the production is Max Wolkowitz as The Ingenue/Avram. Wolkowitz also takes on the role of the playwright, Sholem Asch and he plays him to the hilt. His authentic portrayal and confidence in the role makes for a hard-hitting performance. He seems to have a deep knowledge of this character and respectfully portrays him. The conflict within Sholem Asch is clear and Wolkowitz’s urgency and passion is a joy to watch as he brings this man back to life. 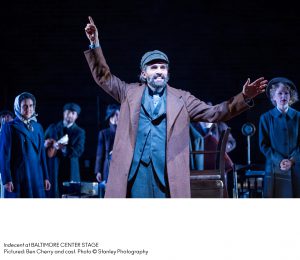 A definite highlight of this production is Ben Cherry as Lemml, or “Lou”, the Stage Manager of this troupe of actors. Cherry, from the beginning, makes this charming, simple character loveable. You can’t help but get a warm feeling when he speaks and the way he plays this character makes you think he is just the nice guy next door. The character itself is amazing because he’s supposed to be a simple tailor from a small town but he seems to be the only one, among more sophisticated, scholarly folks, who understands the beauty of this new, brash play called God of Vengeance. Cherry plays him with just the correct amount of charm and childish naiveté that makes you just want to hug him and protect him. The authenticity in his portrayal makes it an impeccable performance. 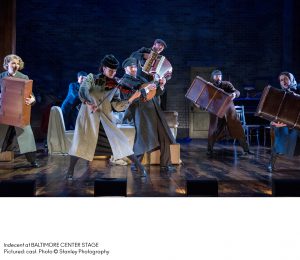 Finally, I would consider this a play with music and giving standout performances are The Musicians, John Milosich, Maryn Shaw, Alexander Sovronsky, with Sovronsky being the Music Director and, Composer of Original Music. These folks are seriously singing for their supper but they do it flawlessly. Their impressive technique and talent on their musical instruments add so much value to this production and they are well-rehearsed and polished. Though all of ensemble take on double, even triple duty, with various roles, there’s just that extra bit for Milosich, Shaw, and Sovronsky by adding in musical instruments and these three step up to the challenge and absolutely succeed. Kudos and commendations to these fine musicians and their efforts.

Final thought…  Indecent may be one of the best productions I’ve seen this season. It’s a beautifully written and performed piece and will leave you questioning your own morals and values. The performers are on point with their characters and give 100% effort to tell this engaging and poignant story that needs to be told. The fact that it’s based on true events makes it even more enthralling and Paula Vogel has knocked it out of the park with her script. The story is relevant and thought-provoking, technical designs are exquisite, staging is superb, and performance is splendid. You need to see this show this season. Get your tickets now and experience it for yourself.

This is what I thought of Baltimore Center Stage’s Indecent… What did you think? Please feel free to leave a comment!

Indecent will play through March 31 at Baltimore Center Stage, 700 North Calvert Street, Baltimore, MD. For tickets, call the box office at 410-332-0033 or you can purchase them online.