If you dream of a place where the wind comes sweepin’ down the plain and the wavin’ wheat can sure smell sweet when the wind comes right behind the rain, well… you can traverse to the great state of Oklahoma, or you needn’t go any further than Artistic Synergy of Baltimore to experience their latest offering, Oklahoma! by Richard Rodgers and Oscar Hammerstein II, Directed by H. Ray Lawson, with Music Direction by Jeff Baker and Choreography by Suzanne Zacker. This well-known classic is reincarnated to give us a glimpse into a simpler time and happier endings. 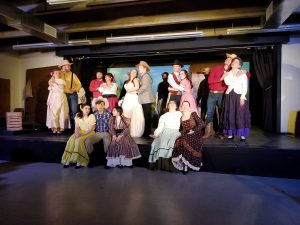 Briefly, Oklahoma! takes place in a territory (not yet a state) not long after the turn of the century when there was a spirited rivalry between cowboys and farmers. Curly, a cowboy, and Laurey, a farm girl are quite in love and the story mainly revolves around these two characters. Laurey is pursued by the sullen, dark farm hand, Jud Fry and threatens her budding romance with Curly. Throw in a spunky Aunt Eller, a whippersnapper of a cowboy, Will Parker, and a curious and spirited young woman, Ado Annie, who likes when men talk “purdy” to her, and you have the makings of a good, old-fashioned, feet stamping musical.

Music Direction by Jeff Baker is superb as this strong ensemble sings through this soaring Rodgers and Hammerstein score with ease. The use of canned music takes away from the energy of the piece, but that’s not to say it’s not energized and upbeat as the cast gives a good showing of this familiar music. 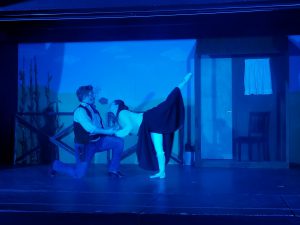 Choreographer Suzanne Zacker seems to know her cast well and has created interesting and engaging choreography that is performed well by the ensemble. It’s worth mentioning that Zacker is a highlight in this piece, taking on the role of Dream Laurey, during the “Dream Ballet” number. Her grace and elegant movement during this number is impeccable and is certainly a praiseworthy performance that keeps you enthralled and entertained.

Ray Lawson takes the reigns of this production and he should be applauded for his Direction, presenting this piece with a balance of the familiar and freshness. It’s always challenging to produce a tried and true story but Lawson wisely sticks with the traditional staging and seems to have a good comprehension of this material. The pacing is on point and the two and a half hour run time is no more or no less than what is needed to present this piece and still be entertaining for the audience. The ending of the show is a little lackluster, ending on a whimper rather than a bang, but I’m chalking that up to using recorded music, and I’m sure the cast will improve this ending with each performance. Overall, his vision is clear and it is a well thought-out, well-rehearsed production. 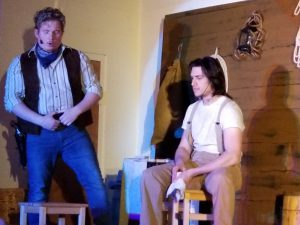 Moving on to the performance aspect of this production, Josh Schoff  takes on the complex and meaty role Jud Fry but, unfortunately, is a little weak in presentation. He certainly does not bomb in this role and he seems to have a good grasp of the character but also seems to be just going through the motions. His eyes dart all over the place and he rarely makes eye contact with his cast mates which loses that connection he must have to make his character work. This may seem like a knit-picky flaw but eye contact and that connection is essential for this role. Vocally, he’s a little shaky but emotes adequate emotion needed in songs such as “Poor Jud is Daid” and “Lonely Room” which redeems his performance a bit. With that being said, he looks near perfect for the role and is comfortable onstage and with a little more effort, could take this character to the hilt. 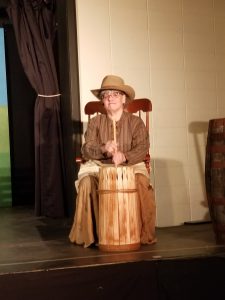 Tackling the role of the feisty and spunky Aunt Eller is Donna Zubrowski and she is perfectly cast in this role. Zubrowski brings a certain authenticity to the part and her choices are befitting of such an endearing character. She has a great chemistry with the ensemble and is comfortable in the role making for a delightful performance. To go along with the more comedic characters, Lou Otero gives a humorous take on the role of Ali Hackim, the traveling salesman who finds himself in the wrong place at the wrong time and in the site hairs of a couple of young women of the territory. Otero has a good comprehension of his character, even if his accent is a little wonky, and he has good comedic timing. 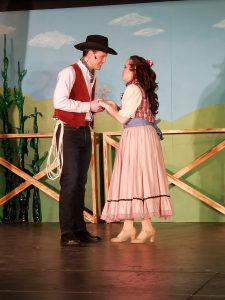 The young, optimistic couple Ado Annie and Will Paker are portrayed by Kristin Miller and Joe Weinhoffer, respectively, and both play these roles splendidly with an absolute believable performance and great chemistry. Miller embodies the giddy, immature, but yearning Ado Annie and, gives a terrific vocal performances as in her featured (and well-known) number “I Cain’t Say No.” Weinhoffer is brilliant as the lovelorn Will Parker and effectively and poignantly portrays the love his character has for Ado Annie. Vocally, he gives a commendable performance, especially in his featured number “Kansas City” where he also gets to show off his movement skills along with the rest of the male ensemble. 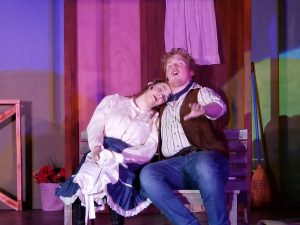 Leading this ensemble are Austin Barnes, as the loveable and upstanding Curly, and Mea Holloway, as Laurey, the simple, independent farm girl. These two actors definitely know their characters and have a firm grasp on the material making for a strong leading duo. Barnes has a booming, smooth voice and is a powerhouse, making the audience take notice from the get with his rendition of “Oh, What a Beautiful Mornin’.” He fully embodies this character and gives a  jovial flair to Curly, as it should be. He has as great presence on stage, giving a strong performance. Holloway is suited nicely for her role but seems a bit subdued and stiff at times It seems she lights up when she has lines and interaction but falls flat in between those instances and the character is not consistent in that aspect, drawing away from her obvious skill and talent. Her voice is absolutely appropriate and beautiful for this score and she gives a stellar vocal performance, shining in her featured numbers such as “Many a New Day,” “People Will Say We’re in Love,” and “Out of My Dreams.” Overall, the two work well with each other and, though a little forced at times, the chemistry is there and makes for a good showing.

Final thought…Oklahoma! at Artistic Synergy of Baltimore is a well put-together production that does this classic, familiar piece justice. The pacing is good (for a show that could easily seem to go on forever), and the ensemble is strong, overall, and seem to enjoy working with each and off of each other. The traditional staging still holds its own in our modern age and the tunes are still delightful and will have you tapping your toes or drawn in to their poignancy. They just don’t write ‘em like this anymore! It’s definitely a fluffy, feel-good piece of theatre that works well for community theatres like Artistic Synergy of Baltimore and it’s a wise choice to produce the classics to remember where our modern shows came from and to introduce them to a new, younger audience. This production of Oklahoma! is definitely one you want to check out.

This is what I thought of Artistic Synergy of Baltimore’s production of Oklahoma!… What did you think? Please feel free to leave a comment!

Oklahoma! will play through March 18 at Artistic Synergy of Baltimore, Prince of Peace Lutheran Church, 8212 Philadelphia Road, Baltimore, MD. For tickets, purchase them at the door or online.