In the world of billions of people, two sometimes come together whether by chance or a little planning and sparks fly. You only get one chance at a first impression and sometimes you find that the one you love is the one you hated at first sight. I’ve heard we’re drawn to people who help us grow and learn so, in a way, we are drawn to people we need. Sometimes we get what we need honestly and, in the real world, we sometimes get what we need with a little “arranging,” whether we like to admit it or not. In Fells Point Corner Theatre’s latest production, Sex With Strangers by Laura Eason, Directed by Patrick Gorirossi, gives us a glimpse into a somewhat dysfunctional relationship between an older woman and younger man who both need something from the other whether they know it or not. 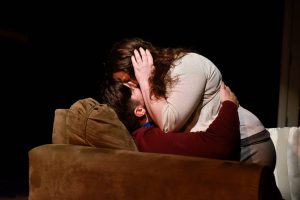 Sex With Strangers, in a nutshell, concerns a twenty-something blogger, Ethan who finds his writing hero, the older Olivia, in a secluded cabin and they realize they both want what the other has already. A flirty attraction turns to an intimate relationship and they slowly move closer to what each wants from each other. However, through twist and turns, each must go through some self-realization and the sleazy side of climbing the ladder (or falling off the ladder) as each reinvents him and herself to attain their ambitions.

The story, itself, is a good story, very relatable, and can be set in any era. The characters are fleshed out and I found myself liking one over the other then making a complete 180° turn by the end. The dialogue is natural and authentic with no major plot holes or, any plot holes at all. It’s an easy story to follow and the ending, which I won’t give away, of course, leaves the audience thinking, which is always the hallmark of a good, well-told story.

Fells Point Corner Theatre, with its more traditional space, never disappoints when it comes to their sets and David Shoemaker’s Set Design is no different. He knows the space well and uses it wisely, giving us an authentic space for this piece. Everything is strategically placed and natural putting the audience in the scenes making the production more engaging. It’s a simple design, but absolutely appropriate and, from the audience, I feel like I’m looking through the window into a living room of a secluded cabin or a New York City apartment. Kudos to Shoemaker for his impeccable design.

Patrick Gorirossi takes the helm of this production and his Direction and staging is superb and engaging. Having a two-person cast can be challenging but Gorirossi manages to keep the action moving and it’s clear he has a good grasp on the material and the movement on stage is authentic and natural. His casting is top-notch and the production is polished and paced perfectly. Kudos to Gorirossi on a job well done. 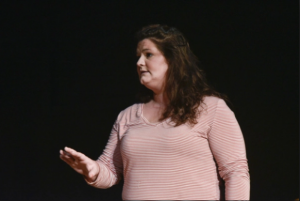 Moving on to the performance aspect of this production, it’s worth noting that the two-person cast of Kathryne Daniels as Olivia and Matthew Lindsay Payne as Ethan couldn’t have been cast more perfectly. They both embody this characters completely and have a great comprehension of the text. Neither are merely going through the motions, but are feeling what their characters are feeling and their choices fit the piece flawlessly. 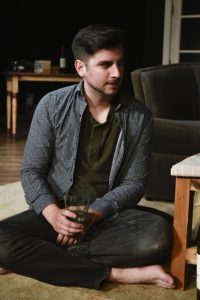 Though it was a bit of a stretch to believe Daniels is a woman in her early forties, she plays the character splendidly. Her transition from obscure, self-doubting writer to confident and ambitious novelist is seamless and occurs naturally. The writing accomplishes this well already, but Daniels brings it to life. Her natural and purposeful delivery makes her performance believable and she has a strong stage presence that works well for this piece. The chemistry she has with Payne is quite good and makes for a solid and refined performance.

Payne, too, gives and honest and solid performance as the twenty-something brash and no-holds-barred blogger who is “plugged in” 90% of the day. He handles his character’s change from beginning to end delicately and smoothly making for a brilliant performance. His comprehension of this character and his conflicts is apparent and his presence is strong making for a terrific performance, overall.

Final thought… Sex with Strangers is a moving, poignant piece that makes one think about relationships and what we need and/or want out of them. It’s also about learning to trust people and learning, sometimes the hard way, about what it is to be betrayed. The production is unassuming but strong and the performances are on point filled with skill and a solid chemistry. The modern setting makes it relatable and the characters and story are timeless making for a show that will be relevant for years to come and makes for a charming, thoughtful evening of theatre. Get your tickets because you don’t want to miss this one.

This is what I thought of this production of Sex with Strangers.… what do you think?