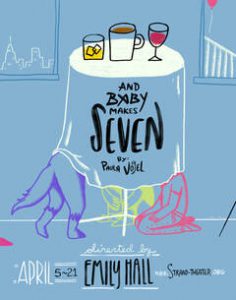 Young expecting parents may have strange ways of coping with the inevitable. Some research and read every book they can get their hands on or watch every video they can find on the Internet, and some just let it happen, taking advice from those who have gone through the same experience. Everyone has their own way of coping and preparing and in The Strand Theatre’s latest offering, And Baby Makes Seven by Paula Vogel, Directed by Emily Hall, gives us a glance into what could be called an unconventional coping and preparation mechanism from an expecting mother, her lesbian partner, and male friend/father. The trio works their way through the usual issues of expecting parents with humor and poignancy, which, in the end, is pretty much like everyone else. 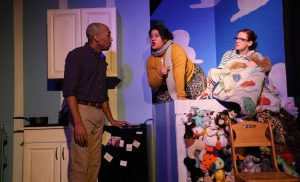 In a few words, And Baby Makes Seven concerns itself with a trio of folks expecting a baby, but realize they have to get rid of the three imaginary children in the house before the real baby comes. Sound a little off? Well, it is, but it all comes out in the wash.

Set Design by Kate Smith-Morse works just about perfectly for this piece. It’s an intimate space, but Smith-Morse has used her workspace wisely. There is a simple separation between the two main spaces, a bedroom and the kitchen area, but it’s just enough to be distinguishable. It is a realistic set that fits nicely with this production. Smith-Morse’s design doesn’t hinder any action and helps the action flow smoothly making for a well thought-out design.

Emily Hall takes the helm of this production and her Direction of this piece is superb. As I mentioned, this theatre is an intimate space and a show like this, with only three characters, is perfect for this stage. Hall seems to have a good comprehension of the characters and she has guided this apt cast into telling this story well. For such a quirky tale, Hall has presented it in an easy to follow fashion and her vision is clear… it’s a group of folks simply trying to cope with a pending birth, and doing what they feel is right, regardless of what anyone else may think about it. Hall is to be commended for her work on this production.

Moving to the performance aspect of this piece, this trio of actors work their way through this script superbly. 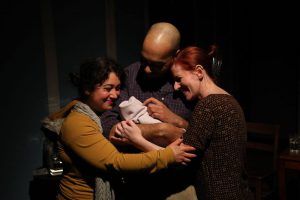 Though Jess Rivera, as Ruth, the non-pregnant female in this trio, started off by annoying me with her over the top  portrayal of imaginary Henri, a young French boy, and imaginary Orphan, a dog of sorts, but I found myself getting used to it as the play progressed. Rivera certainly knows what she’s doing on stage, but it looked as though she was trying to hard as the imaginary kids. However, when she switched off to play the normal, everyday Ruth, she shined and portrayed her effortlessly, so, I can see this actress has an real talent. Overall, Rivera has a tight grasp on this character and gives a great showing and makes these characters endearing, making for a delightful performance.

Next up, Katherine Vary takes on the role of Anna, and the imaginary child genius, Cecil. Vary is well in tune with this character and her character’s imaginary counterpart. She plays Anna, the pregnant character, with ease. She seems to have a good understanding of this character, as well as with Cecil, making him just irritating enough, but charming a the same time, which is not small feat. Her delivery is smooth and natural and, overall, she gives a strong, confident performance.

Rounding out this stellar ensemble is Grand Emerson Harvey, who takes on the role of Peter, the father of the unborn child, and thought it’s eluded to him being a homosexual, it’s only really hinted at in a few lines toward the beginning of the play. Either way, Harvey pulled this role off beautifully and confidently. This character seems to be the only “normal” one in this trio, keeping his feet grounded in the real world, but he also understands that Ruth and Anna need to have these imaginary kids to cope and prepare themselves for what’s to come, and… maybe he does, too. Harvey was near flawless in his portrayal of this character. He made this character his own and seemed to embody him. His delivery is clear and concise and he really brings the character to life. Working in tandem with Rivera and Vary, this trio seems to naturally fit with brilliant chemistry and it just makes the characters more real and the story more believable.

Final thought… And Baby Makes Seven at The Strand Theatre is a quirky, comedic take of how people prepare themselves and cope with pregnancy and the inevitable addition of a new baby to the family. However, don’t let the imaginary children fool you. In the end, I really liked these characters because they knew the kids were imaginary and knew they were pretending and nothing more, adding a realism that was needed. Paula Vogel has weaved a poignant, off-center story about a blended family and their interpretation of the world around them. It may take a moment to get into the groove with this piece, but the small three-person ensemble presents these characters beautifully and truthfully, making for a delightful evening of theatre. You may have to pay extra attention to to keep up with the characters, but the ensemble does a good job keeping everything in place. If you haven’t seen it yet, it’s definitely worth checking out.

This is what I thought of The Strand Theatre’s production of And Baby Makes Seven… What did you think? Please feel free to leave a comment!

And Baby Makes Seven will play through April 21 at The Strand Theatre, 5426 Harford Road, Baltimore, MD. For tickets, call the box office at 443-874-4917 or you can purchase them online.