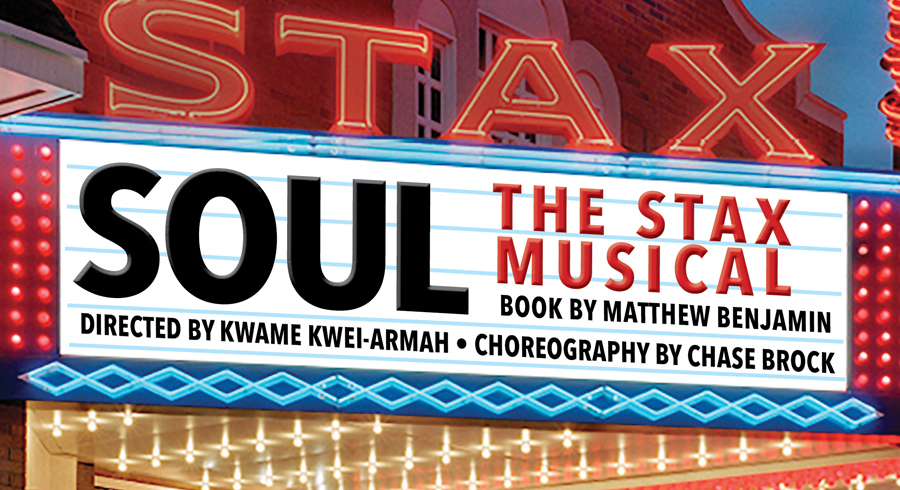 Running Time: Approx. 2 hours and 10 minutes with one intermission 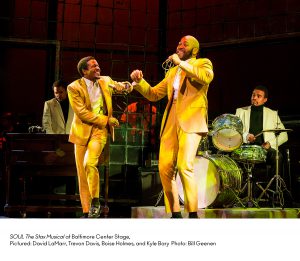 It’s likely that we’ve all heard of Motown Records, RCA, Atlantic, A&M, and all the other big names in the music business, but what about the smaller labels that gave us the classics we know and love today? Unbeknownst to many, small companies like Sun Records, Chess Records, and Stax Record Co. have given us numerous hits and given starts to such legendary performers such as Elvis Presley, Muddy Waters, Otis Redding, Isaac Hayes, and countless others, but we usually don’t think about where these folks started. Baltimore Center Stage’s latest offering, SOUL the Stax Musical with a Book by Matthew Benjamin, Directed by Kwame Kwei-Armah, Musically Directed by Rahn Coleman, and Choreographed by Chase Brock, tells the story of one of these aforementioned companies, Stax Record Company, and it’s rise and fall in that crazy business of music. 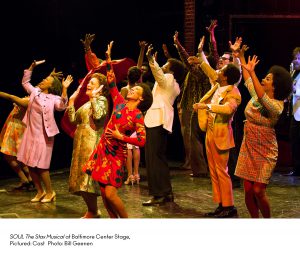 In a nutshell, SOUL the Stax Musical concerns itself with the rise and fall of Stax Record Company and the evolution of American soul music. It begins with a brother and sister team, Jim Steward and Estelle Axton, who combined the first two letters of each of their last names to form Stax Record Company. It touches on the careers of many well-known artists such as Otis Redding, Isaac Hayes, Sam & Dave, and others who started their long, illustrious careers at the small label. It also tells of how the music business isn’t all about the music, sometimes, and bad deals, novice businessmen, and egos get in the way of the magic. Every good thing must come to an end whether we like it or not and this is not only a history of soul music but also a cautionary tale of the business part of show business. 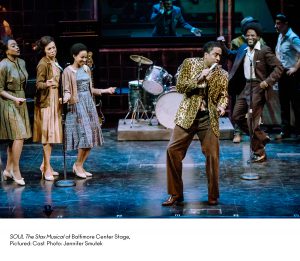 Scenic Design by David Gallo is intelligent and practical adding value to this production. Using a unit set with set pieces coming in and out, create each space perfectly and seamlessly in this fast paced piece. Though in the background, the orchestra is presented nicely and they are noticeable but cleverly out of the way of the action. A simple looking set, it allows for ease of entrances and exits of the actors and helps tell the story in an interesting and engaging way.

Dede Ayite’s Costume Design is divine and on point as each era of this production is represented from the late 1950s through the 1970s, with a bit of the 90s thrown in there. Her attention to detail is commendable and there is no question as to which era we are in by the styles and wardrobe chosen for each character. Kudos to Avite for a superb design. 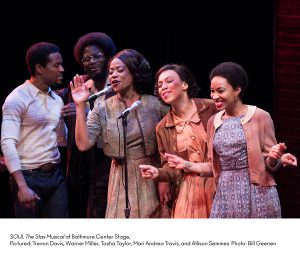 Since this piece is all about the music, Music Supervisor and Musical Director Rahn Coleman is to be commended for his fantastic direction. The tunes are recognizable and folks are familiar with most of them so it can be tricky not to mess with the music so much, but, wisely, Coleman has decided to stick to the original arrangements and the audience couldn’t have been more entertained and pleased. It’s worth mentioning the outstanding band consisting of Jared Denhard (Trombone), DeAnte Haggerty-Willis (Guitar), Matt Kruft (Guitar), Todd Harrison (Drums), Fred Irby, III (Trumpet/Flugelhorn), Winston Philip (Keyboard), Mark Russell (Bass), and Ed Walters (Saxophone/Flute). These folks hit the nail on the head when it came to performing the music of this energized, delving music and they deserve many kudos for their efforts for this production. 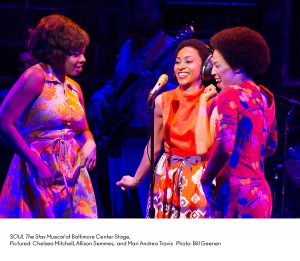 To go along with music being a main component of this production, Choreographer Chase Brock also gives us high energy, brilliant, and engaging choreography that is simply a joy to watch and is actually infectious, causing me to tap my foot along with the classics I grew up hearing. I found myself looking forward to and waiting with anticipation for the next choreographed number and I the dancers themselves were tight and well-rehearsed adding great value and vitality to this production.

Kwame Kwei-Armah, former Artistic Director of Baltimore Center Stage, has taken this script and presented it in a thoughtful and attentive manner, giving us the history and the humanity of a story not often told. Technically, this is a historical piece and has to be handled carefully, but Kwei-Armah with clever staging, on point pacing, and wonderful casting has managed to tell this story and stay true to that history. It’s obvious he has a great comprehension of the material (both the text and the music), and it shows in his dynamic vision that reaches into the psyche and soul (no pun intended) of the audience. 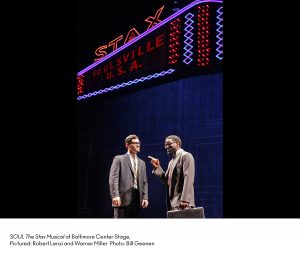 Moving on to the performance of this piece, I would be amiss if I didn’t mention how well polished and dedicated the entire ensemble of this piece is. They work well together and off of each other and it’s easy to see every member of this cast is giving 100% of him or herself and is confident in the story they are telling. Major kudos to the ensemble as a whole.

Among this amazing ensemble are a few higlights, such as Robert Lenzi as Jim Stewart and Warner Miller as Al Bell, the creator (Jim Stewart) and somewhat savior (Al Bell) of Stax Record Company. Lenzi is confident and has a complete grasp of his character – an unexperienced, wet-behind-the-ears music executive. His mannerisms and character work is impressive and makes Jim Steward a likeable character in the end. Miller, too, has a good comprehension of his character – a smooth-talking, good-intentioned radio DJ turned music executive. Miller’s blend of sincerity with a hint of sleaziness is impressive as he’s created a character that keeps the audience guessing whether or not they like him or not, making for a complex, engaging character. 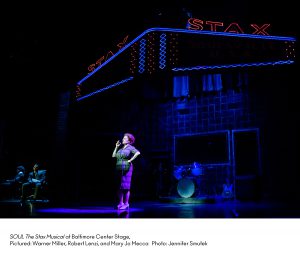 There’s an old adage that goes something like “behind every great man is a great woman” and there is no exception in this story. Mary Jo Mecca takes on the role of Estelle Axton, co-founder of Stax Record Company and the logical thinker of the crew, and Anastacia McCleskey tackles the role of Deanie Parker, dedicated employee and peace-keeper of sorts. Mecca gives an authentic and poignant performance as Estelle Axton and plays this character as rough-around-the-edges but it’s easy to see she has a heart of gold and cares deeply for her brother and business partner, Jim. Mecca is able to portray this character with the perfect blend of acidity and charm that makes her a multifaceted, but likeable character. Also, her vocal performance is spot on, especially in her featured number, “Your Good Thing (Is About to End)” which she duets with an able and resonating Tasha Taylor (as Mable John). 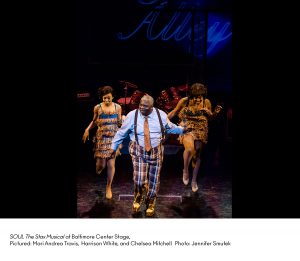 Rounding out this uber-talened and able ensemble is Harrison White as Rufus Thomas, Ricky Fante as Otis Redding, and Boise Holmes as Isaac Hayes. These three actors couldn’t be more on point with not only their performances but their look and representation of these well-known soul singers of a bygone era. Harrison’s energy is relentless and remarkable as he sings and dances his way through is featured numbers such as “Walking the Dog,” “Can Your Monkey Do the Dog,” and the party staple “Do the Funky Chicken.” He also has a heartwarming duet with a velvet-voiced Allison Semmes (as Carla Thomas), “Cause I Love You,” which gives us a taste of the good music to come in this production. 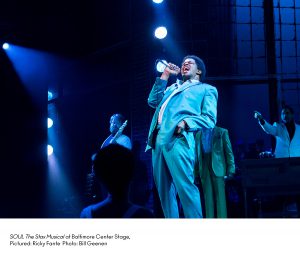 Ricky Fante takes on the persona of the famous Otis Redding and shines bright not only in his portrayal but in his vocals in such numbers as “These Arms of Mine,” “Respect,” and the ever-popular smooth sounding “(Sittin’ on) The Dock of the Bay.” Pure magic.

Kwei-Armah couldn’t have cast anyone more appropriate than Boise Holmes as (arguably) the most famous performer to come out of Stax Record Company, Isaac Hayes (who started at Stax while he was still working at a slaughter house… who knew?!). Holmes completely embodies Isaac Hayes as he transitions this character from the early 60s to through the 70s in style and mannerisms. His deep, smooth bass vocals resonate throughout the theatre and make one stand and take notice. His featured songs are performed flawlessly, such as “Soul Man” in which he duets with an equally notable Trevon Davis (as David Porter), the slow-groove and moving “Walk on By,” and even the mostly instrumental, mostly spoken “Theme from Shaft.” Overall, Holmes is an absolute standout in this production. 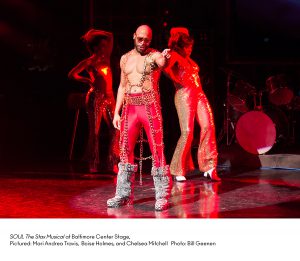 Final thought…  SOUL the Stax Musical at Baltimore Center Stage is a high energy, nostalgic look at the rise and fall of a special time and place that brought us some of the most memorable and meaningful music in American history. It not only entertains but teaches us a little about the music business and its darker side where it’s not just about the music, no matter how the creators want it to be. The performances are spot on, the choreography is inspiring, and the story is one that has been wanting and needed to be told and it is told with love and care. Whether you’re a fan of soul music or just discovering it, you do not want to miss this production this season. Get your tickets as fast as you can!

This is what I thought of Baltimore Center Stage’s Productions’ production of SOUL the Stax Musical… What did you think? Please feel free to leave a comment!

SOUL the Stax Musical will play through June 10 at Baltimore Center Stage, 700 North Calvert Street, Baltimore, MD. For tickets, call the box office at 410-332-0033 or you can purchase them online.