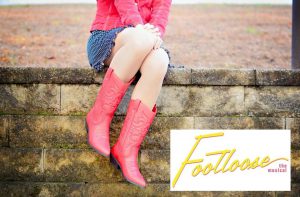 Walking into Saint Demetrious Greek Orthodox Church for The Suburban Players of St. Demetrios‘ production of Footloose with music by Tom Snow (among others), the lyrics by Dean Pitchford (with additional lyrics by Kenny Loggins), and the book by Pitchford and Walter Bobbie, it is clear that you are stepping into a well-oiled machine Directed by Lauren Spencer-Harris, with Music Direction by Steven Soltow, and Choreography by Amie Bell. Ambience takes center stage during the lovely dinner portion of the evening, complete with exceptional service and a wide variety of food and drink selections. The food and atmosphere are definitely comparable to any of the professional dinner theaters in the area. Things only get better once those familiar opening strains of “Footloose” fill the room, as the audience is transported into a production filled with energy, fun, and a lot of heart.

The live orchestra is becoming more of a rarity in the age of digital tracks, and it was refreshing to hear an excellent live orchestra under the direction of Musical Director/Conductor Steven Soltow. Soltow’s skill as a leader of music was clear throughout the entire production. Often times, harmonies in musicals fall to the wayside when the cast becomes preoccupied with dance moves and other concerns, but, in this production, the harmonies were strong and often the star of the large musical numbers. Better yet, the top-notch focus on vocal competency didn’t slow the cast for a second in their synchronized delivery of the energetic and exciting choreography of Amie Bell. While sometimes in a musical, the acting scenes can see like the things to “get through,” it is clear that Director Lauren Spencer-Harris spent time with actors on timing, pace, and emotional delivery in those scenes. Spencer-Harris also makes a wise decision to keep the momentum moving at all times. The scene changes are quick and seamless, and there is always some action going on during the change to keep the audience engaged in the moment.  Even with a large and diverse ensemble, the production team has everyone knowing what they are doing and living each moment of the show with passionate engagement.

Footloose is the story of teenager Ren McCormack (Eric Bray Jr.), whose mother (Caitlyn Soltow) packs him up and moves him from a big city to a small town. Bray is perfectly suited to be the heart of the production with his natural charisma and believability on stage. Bray always seems to live in the moment of the performance with natural reactions to everything that is happening around him. Bray’s beautiful and consistent vocal performance sells the emotional center of the piece. Soltow possess similar strengths, and there is a lovely moment towards the end of the show when Ethel encourages Ren to keep fighting.

What Ren is fighting is a law in town that prohibits dancing. That law was enacted and is held onto fiercely by the town’s preacher, Reverend Shaw Moore (Perry Alexion). Alexion is sometimes inconsistent in his performance. He focuses too much on what and how he is singing without allowing himself to connect with the message behind the words. However, when Alexion allows himself to be in the moment – especially in his final, explosive scene with Ren – he has a powerful presence that can move the audience to tears. As his wife Vi, Tammy Oppel is also similarly inconsistent; however, it sounded as if she may have been fighting illness during this particular performance.

As the reverend’s daughter Ariel, Marina Yiannouris is enchanting. She mixes sweet and mischievous with a perfect balance and carefully plays the subtext between her lines. Yiannouris has a gorgeous and powerful voice. She blends well with Bray, both musically and in their scene work. They have a very easy and natural chemistry on stage.

When Yiannouris joins with Ariel’s three friends – Rusty (Mia Coulbourne), Urleen (Jamie White), and Wendy Jo (Katie Pendergast) – for “Holding Out for a Hero,” it is sheer magic. All four young women are excellent vocalists with commanding stage presence. Throughout the show, the trio of friends brings great moments of hilarity as well as powerful moments of intensity. “Somebody’s Eyes” is several minutes of sheer perfection with their vocal prowess, Bray’s relatable acting, and an intricate blend of staging and choreography. Even within this group of talented actresses, Coulbourne is able to really stand out with one of the most perfect performances ever. Everything she does comes across effortless and exceptional. Her comedic delivery flows off the tongue, and her voice is beyond incredible.

Coulbourne’s counterpart, Willard (Jordan Baumiller) is another role to watch for. Willard is one of those characters written to steal a show, and Baumiller milks that opportunity for all of its potential. He creates a loveable character. His realistic delivery of the lines makes them hilarious. Both Coulbourne and Baumiller effortless avoid the pitfall of overplaying the silliness of their characters. The raw realism is what makes the characters funny, and they both clearly understand that. Baumiller also shines in his rendition of “Mamma Says,” getting a chance to show off his beautiful and powerful classical musical theater sound.

The only slight concerns with this production were technical. There seemed to be some issues with the microphones at first, although the worst of the issues seemed to get fixed after the first few numbers. So, hopefully, they figured out the problem and have it resolved now. The other issue was the lighting at the end of “Almost Paradise.” There were bright flashing lights at the top of the stage, so close to the performances on the platform and so bright, that I actually had to look away during the end section of that number because it was hurting my eyes. Other than that, the lighting was effective throughout.

If you don’t have your tickets yet, you should get them quickly. Because it is a dinner theater, tickets are not sold at the door for most performances. If you are looking for a fun time and a fantastic meal, Saint Demetrious Greek Orthodox Church is the place to be this weekend. The Suburban Players and their Footloose will not disappoint.

This is what I thought of Footloose the Musical at Suburban Players… what did you think? Feel free to drop a comment!