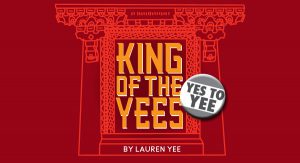 The Generation Gap is really a thing. If you don’t think so, think about the disagreements you’ve had with your parents or grandparents. Things change – it’s inevitable. However, though we don’t have to agree with our elders, we have to understand their ways and how they did things to really know them. Baltimore Center Stage’s latest offering, King of the Yees, by Lauren Yee, Directed by Desdemona Chiang gives us a glimpse into the relationship of an Asian-American father-daughter duo and their attempt to understand each other and it’s a must see this season. 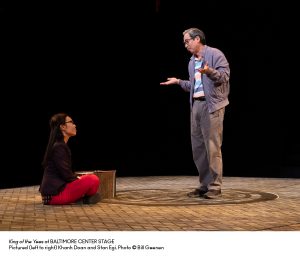 King of the Yees concerns itself with Lauren Yee, a young-ish playwright who is using her father’s hall to rehearse her newest piece that happens to be about her father, Larry Yee, who has been an important figure in the Yee Family Association, a strictly male-only organization. This association seems to be outdated and somewhat obsolete but has been around for over a hundred years, forming soon after the California Gold Rush. Larry Yee goes missing and Lauren must navigate through San Francisco’s Chinatown and immerse herself in a world with which she is familiar and unfamiliar all at the same time. Through both hilarious and heartbreaking scenes, Lauren learns about her heritage and the true meaning of being a Yee.

Carey Wong’s Scenic Design is intelligently minimal, and he uses the space of the thrust stage wisely. Wong uses a base of Chinese hanging lamps and the important double red doors suspended in the air with simple set pieces representing various locations. The seamless transitions help move the action along and help tell this story without hindering it with clunky scene changes. 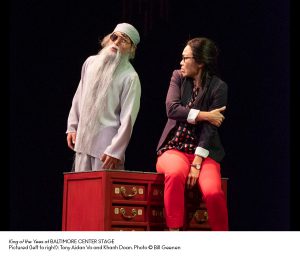 Lighting Design by Jessica Trundy and Sound Design by Brendan Patrick Hogan and Alex Hawthorn work in tandem to add a certain energy to the production. Trundy’s superb design incorporates isolated lighting as well as moving light at appropriate times that set the mood for each scene and assist in presenting this story. Working with Trundy’s design, Hogan and Hawthorn’s Sound Design is wonderful, using both traditional Chinese compositions as well as modern dance music that keeps the audience on their toes. The designs work hand in hand to create a world that moves this production along beautifully and helps rather than hinders the presentation of this story.

Costume Design by Christine Tschirgi is well thought-out and authentic. With so many different characters played by a small ensemble, Tschirgi, chooses both simple and elaborate representations to get the point across. Modern day attire as well as traditional Chinese styles are used in a beautiful blend of past and present and each actor is transformed not only in character but in look and it helps the audience in following along with the story.

Desdemona Chiang takes the helm of this production and she has an absolute and clear understanding of this material. Her staging is flawless and the transitions are seamless making for a smooth, easy to follow production. She has a solid grasp on these varied characters and presents them in a humorous way with an underlying truth that could be seen as exaggerated and maybe even a tad offensive, but it’s totally not. Speaking from experience, I’ve encountered every one of these characters in my family and lifetime. These are real representations of different people in different Asian-American generations and Chiang hits the nail on the head with each and every one of them. Her deep comprehension of the story and the characters make for a funny but very true presentation and she should be applauded for her interpretation and work on this piece. 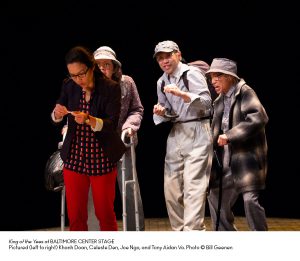 Moving on to the performance aspect of this production, Khanh Doan takes on the role of Lauren Yee, the woman caught in between generations, cultures, and traditions. Doan gives a strong, authentic performance as a woman on the brink of the past and the future. He comprehension of this character is quite apparent, and she plays her to the hilt. Pretty much the straight man amongst the comedy, Doan holds her own and is comfortable and confident in this role. With the help of the real Lauren Yee’s brilliant writing, Doan is delivers the dialogue effortlessly and brings you into the story of the Yees.

Every actor on the stage does their part with great effort to tell this story and most of this small, 5-actor cast take on multiple roles and each does so with impressive ability. Definite highlights of this piece are Joe Ngo as Actor 1, Celeste Den as Actor 2, and Tony Aidan Vo as Actor 3. They are all powerhouses when it comes to character work and all should be commended for their work in this piece. These three actors work very well with and off of each other with great chemistry. Their transitions between characters are solid and clear and one would have to look closely to figure out who is whom. From Chinatown elders, to liquor store owners, to crazy bearded chiropractors, to a Sichuan face changer, to an ancient ancestor named Yee Fung Toy, these three play their roles immaculately and give 100% effort in their work. Every character is believable, funny, and endearing in their own ways and Ngo, Den, and Vo are to the ones to thank for these splendid performances. 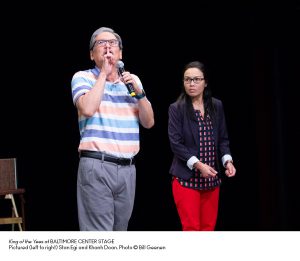 The standout in this production is, hands down, Stan Egi as Larry Yee. His energy, authenticity, and likeable portrayal are heartwarming and, in my case, very relatable. He understands this character who walks a fine line by knowing his culture and ancestry but also living in the modern world. This character is welcoming and humorous and Egi gives an exceptional showing of this jovial character. His comedic timing is spot on and mixes well and just at the right times with his more poignant scenes. He absolutely embodies this character and gives a strong, confident performance that you don’t want ot miss. He is certainly one to watch in this production.

Final thought…  King of the Yees at Baltimore Center Stage is an upbeat, humorous look at Asian-American life, the importance of family, and the differences between generations. Lauren Yee has crafted a beautiful piece that mixes comedy, poignancy, and fantasy that blends seamlessly. What, on the surface, could look like a parody of Asian-American culture, specifically Chinese culture, turns out to be a true and meaningful look at how each generation seems to slip further away from the previous generation and their beliefs. As an Asian-American myself (well, half anyway), and I can assure you, though sometimes exaggerated, the funny parts come from a place of absolute truth. Overall, the production is top-notch and polished. The performances are on point and humorous, but real. This is not a production you want to miss this season so get your tickets now.

This is what I thought of Baltimore Center Stage’s The King of Yees… What did you think? Please feel free to leave a comment!

The King of Yees will play through November 18 at Baltimore Center Stage, 700 North Calvert Street, Baltimore, MD. For tickets, call the box office at 410-332-0033 or you can purchase them online.