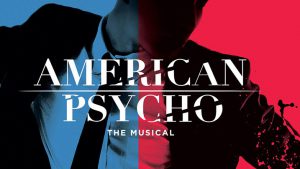 Running Time: 2 hours and 20 minutes with one intermission.

American Psycho at Milburn Stone Theater was truly one of the strangest and most fascinating theatrical experiences. From beginning to end, it was a surreal and gripping journey that is still bouncing around in my mind as I work through of all of the complex plot points and the detailed production points that brought this interesting story to life. For fans of something out-of-the-ordinary, risqué, and thought-provoking, this is the perfect production to immerse yourself in and then dissect afterwards. 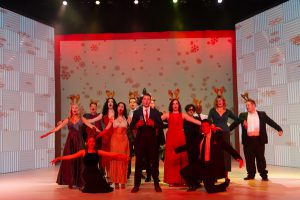 The entire show rests in a world that is part dream, part 80s music video, and part bad trip. The entire production team melds their contributions seamlessly together, so that it is hard to know where one ends, and one begins. Under the helm of the artistic vision of Director Andrew Mitchell, staging, choreography, lights, costumes, and sets become one. Set Designers William Bryant and Brandon Gorin have constructed a perfect blank canvas that continually melds into representations of a variety of locations, both real and imagined. It is a white stage with white walls (patterned right out of an 80s set) and white floors that are ready to be painted upon. There is also the occasional, well-planned use of the scrim at the front of the stage. The giant side walls open up slightly, which allows scenes to slide easily in and out of use, so that entire show continues to flow in a constant and appropriate stream of consciousness.

That very consciousness is displayed across the stage through a masterful use of projections and lighting. Lighting & Projection Designer Patrick Yarrington’s design is easily the most stunning and breathtaking use of lighting ever. At times, the projections create the flying feel of an IMAX movie. Other times, the racing lights take over, so that the characters are floating within. In the beginning of Act Two, the frenzied race of the night club scene and murder come together in a brilliant use of flashing strobe and shadows on the walls. Sometimes, the red of the stage is almost blindly with the characters’ desperations. Blood splatters and spills down walls. And, then sometimes, it all goes stark white again as a brilliant contrast and shift in the scene. Each cue, each color is clearly carefully selected to echo the emotional core of the show. Complimenting the lighting design and the careful attention to color is the costume and prop design by Dann Combs and Eddie Hurley. Characters and scenes display intentional color patterns that add to the visual lushness of the production. 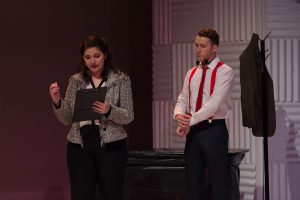 The dreamy, trippy, 80s vibe spills over into the sleek choreography by Tommy Fisher-Klein. The perfectly synchronized ensemble tumbles through a fluid escapade of various dance techniques used to push forward the thematic conceptions of the show while also including some fun throwbacks to decade-appropriate moves. Adding to the continued fluidity and constant moving and tumbling of the script and the emotions is staging by Andrew Mitchell that feels choreographed, in the best way possible, as each moment transitions seamlessly into the next. All of this visual beauty is then augmented by the auditory beauty of the harmonies of the cast under the musical direction of Charlie Hannagan.

Bringing this complex vision to life is a powerful cast of performers. The ensemble works well together and mostly exists as a cohesive unit. A particular standout in the ensemble is Liz Hamill. Her vocals at the beginning of “In the Air Tonight” are stellar. Several others do a good job of making quirky side characters have authentic life, such as Alex Vanderlak (Luis Carruthers), Ry Miliner (Tim Price), and Emily Elborn (Courtney Lawrence).

A strong and memorable performance comes in the hands of Alex Quigley as Paul Owen. He is naturally at-ease and charismatic onstage. The perfect amount of grating and self-absorbed brings to life the character of Evelyn Williams, played by Evelyn Schiavone. She is the ideal contrast to the sweet and unassuming Jean, played by Heather Bounds. Bounds has an especially lovely voice, as showcased in “A Girl Before,” and really has some meaty moments to show the strength of her dramatic acting abilities.

However, really, this experience is all about being Patrick Bateman. That is exactly what Josh O’Donnell does with incredible skill. It becomes increasingly harder to take your eyes off of his frenetic performance. He becomes increasingly more lovable, charismatic, and charming, while, in the same moments, becoming increasingly more terrifying and unhinged. He walks this electrifying tightrope of an existence that is riveting to watch. O’Donnell is also a natural dancer, which allows his movement in musical numbers to be effortlessly creepy.

American Psycho is a dark and twisting thrill ride. The complex plot is filled with things to think about and discuss. The production value at Milburn Stone is top notch. This is definitely worth checking out.

This is what I thought of Milburn Stone Theatre’s production of American Psycho… What did you think? Please feel free to leave a comment!

American Psycho will play through October 20 at Milburn Stone Theatre at Cecil College, 1 Seahawk Drive, North East, MD. Purchase tickets at the door one hour before show time or purchase them online.