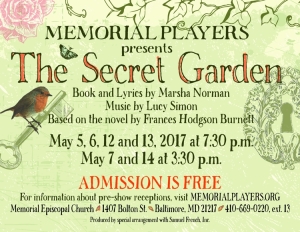 Running Time: 2 hours and 30 minutes with one 15-minute intermission
Some may be privy to, but many may not know about this little gem of a theatre company in the middle of Botlon Hill called Memorial Players and it’s a company that everyone should know about. Admission is free and you get a hell of show with a packed house and community support out the wazoo! It’s heartwarming to see and enjoyable to experience and you should make time to get down and check these folks and see what community theatre is all about.
Their latest offering, The Secret Garden, with Book & Lyrics by Marsha Norman, Music by Lucy Simon, and based on the novel by Frances Hodgson Burnett, Directed by Bill Kamberger, with Music Direction by Gregory Salorie-Robinson and Tim Viets is a production worthy of the packed house it assembles just about every night.

The Secret Garden, in a nutshell, tells the story of Mary Lennox, a young girl orphaned by a cholera outbreak in India when she is ten years old and she is sent to Yorkshire (The Moors) in England to live with her unhappy Uncle Archibald Craven and his curmudgeon brother, Dr. Neville Craven, as well as her seemingly sickly cousin, Collin. All the while, her late Aunt Lily Craven is never far away and watches over the household in spirit. Though they start off with a rocky relationship, Mary and Collin grow quite fond of each other and Mary discovers her aunt’s beloved but neglected “secret garden” which she, with the help of a gardener, Dickon, a chambermaid, Martha, and Collin, brings back to life. She blossoms into a happy child bringing happiness and love back into the house as well as to her cousin and uncle. 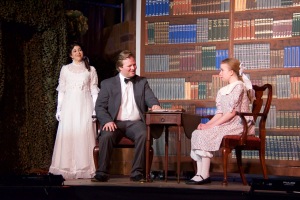 Set Design by John Seeley is simple, yet very appropriate for the space with which he is working. He cleverly uses levels to distinguish specific locations and rolling flats to change settings and it works beautifully and seamlessly. Along with a brilliant Costume Design by Rosslyn D. Kooser, one is transported to Victorian England and to this manor house and gardens.
Lighting Design by Charles Danforth, III is creative and exciting using light and shadows to insinuate the settings of each scene just enough that the audience has a better idea of where everything is taking place. The minimal projections add value to this piece and the splashes of color and specials used enhance the piece rather than hinder it and makes for smooth transitions.
I’ve got to mention that the voices in this production are AH-MA-ZING! The ensemble, as a whole, is on point and on key for every number and all are giving 100% to the score. Music Direction by Gregory Salorie-Robinson and Tim Viets knocks it out of the ballpark and this piece is well-rehearsed and well presented, musically.

I wouldn’t do this production justice if I didn’t mention the absolutely outstanding orchestra for this production. This orchestra is so spot on, if one were to close one’s eyes, one would think they are listening to a polished, mastered recording of this music. This orchestra, conducted by Tim Viets, is to be commended and praised for their work on this piece. As a matter of fact, they did such a stellar job, I’d like to list them, if I may:
Keyboard I – Diana Barbour; Keyboard II – Patty DeLisle; Flute/Piccolo – Mari Hill; Oboe/English Horn – Mary Haaser; Clarinet/Bass Clarinet – David Dimmock; Trumpet – Kate Gorman; Trombone – Rob White; French Horn – Rich Roberts; Violins – Michael Vaughn and Ji Hee Cha; Violas – Hyejin Kim and Zoe Hartenbaum; Cello – Cindy Rosenberg and Najette Abouelhadi; Bass – Alec West; Percussion – Brendan Betyn; Conductor – Tim Viets
Major props all around to the orchestra of this production of The Secret Garden!
This piece is well-known and has been produced regularly since it’s Broadway run and sometimes it’s difficult to find a new and fresh way to present something so familiar but Director Bill Kamberger had a vision and it was executed marvelously. He blends the traditional with the new and presents this piece in a fresh and innovative way. He seems to really comprehend the piece and the message it sends and under his guidance, this cast tells this story and presents the message of being open to new experiences and the love of others and learning how to return it, as well. Kudos to Kamberger for a job well done.
Moving into the performance aspect of The Secret Garden, it’s worth noting that every single person involved in this performance gives his or her all. The dedication and commitment are clear and everyone looks to be having a blast up on stage, which, in turn, lets the audience to enjoy the production all the more. Though only a few are mentioned in this review, every performer in this piece is to be commended for their work and dedication. 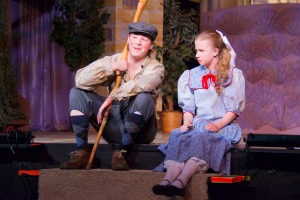 Charlie Roberts takes on the role of the likable, inspiring gardener, Dickon, who helps young Mary Lennox bring the secret garden back to life. Roberts seemed to be playing this role cautiously and subdued, but he still gives a good showing. This character has a very distinct accent and Roberts does an admirable job with it, but I lost most of what he’s saying because the accent seems to be getting in the way. From the third row, it was difficult to hear him, as well, as he doesn’t project as much as I’d like and he’s using a delicate sounding voice that seems higher than his regular speaking voice for this role, which could be a directorial choice, but it somewhat hinders his performance. That being said, I’m not saying Roberts does a bad job because he certainly does not. He’s very comfortable on stage and gives a strong, physical, confident performance and seems to understand his character quite well.

Ruby Webb as Mary Lennox and Gabe Viets as Collin Craven are two young actors who are going places, should they choose. Webb gives an admirable performance as they young, unhappy girl who grows to realize all is not horrible in the world and people can be good and caring and her delicate voice fits the character and music she performs. Gabe Viets is spectacular as the impertinent, spoiled Collin Craven who grows to be compassionate and loving. He gives a very authentic, natural performance that is spot on. I’m looking forward to seeing this young man in the future as he refines his craft. The two young actors have great chemistry and give delightful performances. 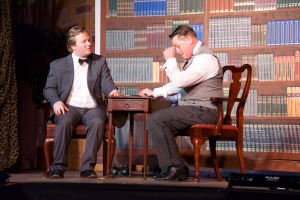 Stephen M. Deininger as Archibald Craven and E. Lee Nicol as Dr. Neville Craven are impeccable choices for these roles and they work well with and off of each other. Deininger hits the ground running with this role. Though at points he seems a bit melodramatic and could pull back a bit, his commitment to this character and the emotion he exudes is on point. He has a strong, clear voice that resonates throughout the theatre (sanctuary) in songs such as “A Bit of Earth” and “Where in the World.” Adding to the feels this piece gives, Nicol, as Dr. Neville Craven, shows off his impeccable acting chops as he navigates through the story as a curmudgeon brother who might have done something different with his life had it not been for the choices his brother has made. Both together are a powerhouse and one of the most familiar songs, the poignant “Lily’s Eyes,” is beautifully performed by these actors both in acting and vocally.
Among this able and talented cast, a few highlights are noticeable such as Lauren Lowell as Martha, Nancy Kelso as Mrs. Medlock, and Jennifer Viets as Lily Craven.
As Mrs. Medlock, the stern, rigid housekeeper of a large house in The Moors of England, Nancy Kelso’s performance is second to none. A perfect look and top notch acting make for a natural, authentic performance where Kelso completely embodies this character. Though this character has no solo or featured vocal numbers, her performance is still strong and confident making this a character to be remembered. Kudos to Kelso on an outstanding performance in a musical without having a featured or solo number of which to speak (or sing)! 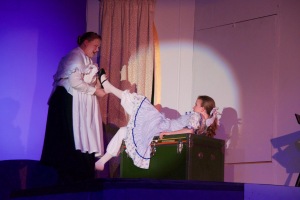 Lauren Lowell as the chambermaid, Martha had me smiling from the moment she stepped onto the stage. The way she portrays this character just makes her likable from the get and she keeps it up throughout the production. Her lovely performances of “A Fine White Horse” and “Hold On” just make her more likeable and she has a good grasp on this character. Her accent work is pretty good, as well, making for a well-rounded, enjoyable performance.

Jennifer Viets has a great look for this role and sings the hell out of it. This character doesn’t have many lines, but with a clear, booming, and superb soprano that rings throughout the theatre, she portrays a spirit of a loving wife and mother and her performance is just about flawless.
Final thought… The Secret Garden at Memorial Players is truly a production made possible by the community with so many folks lending a helping hand. This production of this classic story is full of strong, beautiful voices, able, committed actors, and a top notch orchestra making for pleasant evening of theatre that’s fit for the entire family. Whether your familiar with this piece or seeing it for the first time, you’ll walk away understanding that friendships and relationships can happen anytime, anywhere, as long as you’re open to receive and give back. It’s a well-rehearsed, well put-together production and, if that weren’t enough, it’s FREE ADMISSION so, do yourself a favor and get a seat for this show!
This is what I thought of Memorial Players’ production of The Secret Garden… What did you think? Please feel free to leave a comment!
The Secret Garden will play through May 14 at Memorial Players at Memorial Episcopal Church, 1407 Bolton Street, Baltimore, MD 21217. For more information, call 410-669-0220, ext. 13 or log on to memorialplayers.org.
Email us at backstagebaltimore@gmail.com
Like Backstage Baltimore on Facebook
Follow Backstage Baltimore on Twitter (@backstagebmore) and Instagram (backstagebaltimore)