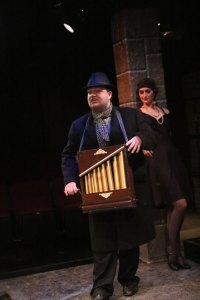 I’m both a musical theatre fan and an opera fan, with emphasis on the former, but I certainly appreciate a good opera now and then. Of course, both genres’ main element is music but the production is a bit different. Spotlighters Theatre‘s latest offering, Three Penny Opera Adapted by Bertolt Brecht and Music by Kurt Weill (adapted from a translation of Jonathan Gay’s The Beggar’s Opera by Elizabeth Hauptmann) merges both of these genres to give us a three hour journey where our heroes fight for social and economic justices to which today’s audiences can relate. This production is Directed, Edited, Adapted, and Newly Translated by Michael Blum, with Music Direction by Erica Rome, and Choreography by Melissa McGinley.
The story begins with the familiar Ballad of Mack the Knife, beautifully performed by Connor Moore (though, be forewarned, it’s much different from the jazzy Bobby Darrin version we’re used to), then goes on to tell the story of Macheath (a.k.a. Mack the Knife) the most notorious criminal in all of England. Macheath marries Polly Peachum (Allison Hicks) much to the dismay of her parents (Frank Mancino and Kay-Megan Washington), who happen to be wealthy and in charge of all the beggars in London but there’s not much to be done since Tiger Brown, the High Sheriff of London is a very good boyhood friend of Macheath. Mr. Peachum, with his clout, threatens Tiger Brown, leading to the arrest of Macheath who manage to escape (a couple of times) with the help of some prostitutes, which leads to an abrupt ending a la deus ex machina (but you’ll have to see it to see if it’s happy or sad). 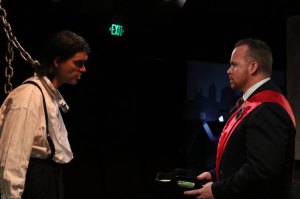 Although this piece runs just about as long as an average opera, the pacing and tempo is very good so, it’s not that the cast is dragging their feet, it’s just A LOT of show. Blum skillfully punches out each scene smoothly without much downtime and keeps the action moving along nicely.
Spotlighters Theatre’s space being as intimate as it is, the Set Design by Alan Zemla is fitting for this piece utilizing set pieces rather than a unit set, which is clever, and using space off the stage wisely, as well.
Going along with the production aspect of this piece, Costume Design by Amy Weimer and Darcy Elliot was well thought-out and befitting with variety and authenticity.

Overall, this is a well put-together production with a tight ensemble but the story gets somewhat lost in the translation by Director Michael Blum. According to Blum’s bio, he has a background in opera, and it seems as though that’s how he approached this production rather than a play with music or a musical theatre piece. The program states the setting of this piece is supposed to be Baltimore in 2017 and London, 1838 (as seen through the eyes of Brecht in Berlin, 1928) – did ya get all that? Blum manages to portray the latter adequately, but the only hint of Baltimore 2017 comes in to play during two instances where the cast dresses up like modern day beggars but, unless I missed it, I didn’t get the feel of modern day Baltimore at all in this piece. However, minor curious direction choices aside, his casting is full of superb vocalists and most are indeed top notch such as Kay-Megan Washington, Allison Hicks, and Amber Hooper – all vocal powerhouses. Music Director Erica Rome is to be commended for her work with this ensemble as they are on point, musically, and Choreography by Melissa McGinley is charming and appropriate, adding value to the production.

A couple of highlights in this production are Evangeline Ridgeway as Jenny Diver and Robert Wall as Tiger Brown, High Sheriff of London. Both a very accomplished vocalists and each portrays his or her respective character with confidence and ease with a strong presence on the stage.
Steve Quintillian takes on the role of our “hero,” Macheath, and though his overall performance falls a little flat as, vocally, he may not be as strong as his counterparts, he gives a good showing as the suave con man, King of Criminals and he is dedicated to his role. 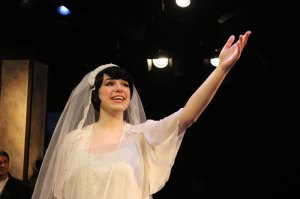 The entire ensemble gives an admirable, dedicated performance (especially ensemble standout Andrea Bush, who carries her smaller role naturally and confidently), moving the piece along smoothly and really rounding out this production beautifully.
Final thought… Three Penny Opera is definitely a bit of an acquired taste but definitely worth checking out because of the incredibly immense vocal talent in this production. The translation may make the sordid story of criminals, con men, crooked cops, and even a little love a bit jumbled, but, overall, it’s a well-performed, charming piece with an absolutely dedicated ensemble. Whether your an opera fan or an old fashioned musical theatre fan, you’ll find a familiar joy in this production.
This is what I thought of Spotlight Theatre’s production of Three Penny Opera.
What did you think? Please feel free to leave a comment!
Three Penny Opera will play through February 5 at Spotlighters Theatre, 817 St. Paul Street, Baltimore, MD. For Tickets, call the box office at 410-752-1225 or purchase them online.
Email us at backstagebaltimore@gmail.com
Like Backstage Baltimore on Facebook
Follow Backstage Baltimore on Twitter (@backstagebmore) and Instagram (backstagebaltimore)