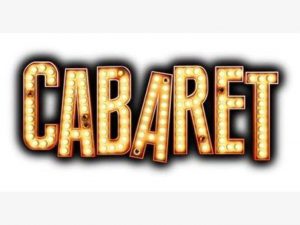 What good is sitting alone in your room? Come here the music play… at Silhouette Stages for their latest offering, Cabaret with a book by Joe Masteroff, Music by John Kander, and Lyrics by Fred Ebb, Directed by Stephen Foreman, with Music Direction by Michael Tan, and Choreography by Amie Bell. Whether your familiar with the original theatrical treatment or the film (which is way different), you’ll enjoy your time with these crazy but deep characters as they find their way through the beginnings of the Nazi regime in 1930s Berlin. 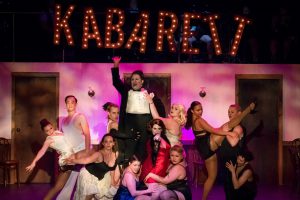 Cabaret, in short, concerns itself with Cliff Bradshaw, a young American man trying to find his footing in the world and has traveled to write. Questioning his sexuality and finding himself in a world of sketchy nightclubs and meetups, he finds himself sharing a room with Sally Bowles, a young, eccentric club performer originally from England. While he represents the ordinary, she represents the extraordinary and through song and dance, along with the mysterious Emcee of the Kit Kat club, they work their way through issues of antisemitism, sexuality, and living in the moment that is quite relevant in the world we live in today.

Stephen Foreman and Alex Porter have opted for a minimal Set Design, which works well with this production. The pit orchestra is incorporated into the set high above the action and two simple platforms and three doors make up the rest of the set and it’s a fantastic, practical design. The attention to detail is on point and the audience is transported to the different locations with various set pieces and props that are well chosen and bring the scenes together. My one (and only) complaint, if it can be called that, because it’s not a big deal, is the original German spelling of “Kabarett.” Thought I appreciate the authenticity and the idea, someone on the design team must think they’re very clever and it’s a bit high-brow for my tastes. There’s nothing wrong with keeping it simple. That aside, however, the overall Set Design is quite appropriate and well-fitting of this production and I give major kudos to Foreman and Porter for their efforts. 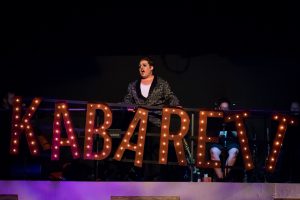 Tommy Malek as The Emcee (Photo by Stasia Steuart Photography)

Lighting Design by TJ Lukacsina and Sound Design by Ben Kinder blend in nicely and add to rather than hinder the action going on up on the stage. Lukacsina separates the dark, seething nightclub scenes from the bright, daytime scenes nicely, giving us a great contrast in location and mood. There are no major sound issues, so Kinder has done his job in amplifying the cast and adding in the appropriate sound effects when needed. Both Lukacsina and Kinder are to be commended for their work on this production.

Period pieces are always challenging for wardrobe but Costume Design by Clare Kneebone and Tommy Malek knock it out of the park. They are spot on with their design, transporting us back to the 1930s with the fashions and styles of the era matched to a tee. From the day-wear to the slinky bustiers and heels, this Costume Design is spot on. 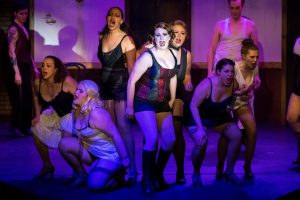 Cabaret is one of those shows where not only the songs are well-known, but there’s a certain amount of importance put on the dancing, and this, too, can be challenging. Though Choreography by Amie Bell is pleasant to watch and works well with the production as a whole, it seems a little uninspiring, at times. That’s not to say it’s not good, because it is very good, but in certain points, just doesn’t have the “oomph” I’d like to see. Now, this very well could be on the ensemble and not Bell’s choreography, but it all has to go hand in hand. I reiterate, it is good choreography. It’s tight and well-rehearsed, so, not all is lost. Bell has a tight comprehension on what the numbers are about and the movement is appropriate 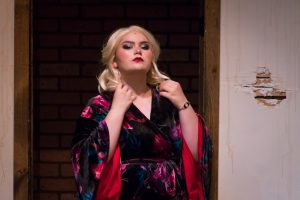 making for a wonderful showing on her part.

Music Direction by Michael Tan is absolutely on point. All of the numbers are well sung and emote the feelings of each song. He has a good grasp of the material and has directed this ensemble to fun, poignant, and strong performances. The small orchestra consisting of Michael Tan (conductor/keyboard), Tina James (Reed 1), Mari Hill (Reed 2), Tony Neenan (Trumpet), Mike Allman (Trombone), Jeff Eckert (Bass), and Billy Georg (Drums) rocks the house and are well-rehearsed, sounding as clear and polished as a recording. I tip my hat to this stellar pit ensemble.

Direction by Stephen Foreman has put together a polished, meaningful production and certainly has a strong comprehension of the text. His casting is superb and his staging is smooth making the action and dialogue easy to follow. Pacing at the performance I saw was dragging a little, but it didn’t stop the exquisite performances. His characters are fleshed out and his vision is clear making for a brilliant production, overall. 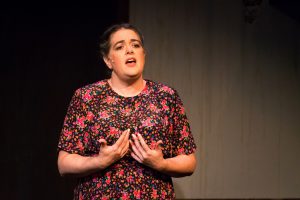 It’s worth mentioning that it’s clear to this reviewer that the ensemble are a tight bunch. They work well with and off of each other making for authentic and precise performances. The Kit Kat Girls and Boys, consisting of Felicia Howard, Briana Arielle Downs, Katie Jones, Miranda Austin Tharp, Linda Michele, Lauren Romano, Angel Duque, Chris Weaver, Rew Garner and Nick Carter, all give strong and natural performances, taking this production to the next level. I’ve always believed if you have a strong ensemble, aside from the main characters, you have a strong show, and this production proves my point with this amazing, dedicated ensemble. 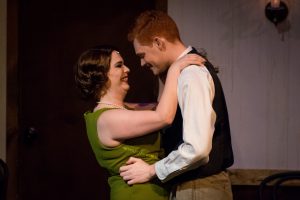 To mention a few main characters, Pamela Northrup as Fraulein Schneider and Christopher Kabara as Herr Schultz, Linda Michele as Fraulein Kost make up the owner and a couple residents of the boarding house in which some of the story takes place. Northup fits well into her character and her portrayal is heart-felt and she emotes the exhaustion and worry of this character, as well as her softer side. Vocally, Northup may not be the strongest performer, but she carries her songs well, such as “So What?” and “It Couldn’t Please Me More.” Kabara, too, portrays his character quite well, though, he struck me as someone more modern rather than a 1930s fruit seller, he still manages to play this character well and seems to understand the trials and tribulations this character is going through at the time. He shines in his featured vocal numbers like “It Couldn’t Please Me More” and “Married.” Michele, playing double duty as a Kit Kat Girl, also manages to portray a believable young German girl trying to get by in 1930s Germany, using what she’s got (her body) to make a living. Michele has great chemistry with her fellow cast mates and knows her character well giving a strong, confident performance.

Seth Fallon takes on the role of Clifford Bradshaw, the young American writer, and Brad Davis portrays Ernst Ludwig, a loyal German who shows initial kindness to Cliff. Davis plays his role beautifully even though it’s a darker character. Davis’ courage to play such a character in this uber-politically correct theatre landscape these days is commendable and he plays this supporting character well. Seth Fallon has an absolutely beautiful, soothing bari-tenor voice that saturates the theatre in the small singing parts his character has, and it makes me want to hear more. His portrayal of Cliff, however, falls a little flat. He seems to have a good grasp of this character and what he’s going through, but his performance is a bit scripted and unnatural at times. He just needs to loosen up a bit and he’ll hit the nail on the head! His chemistry with his cast mates is very good, but could be a bit more, especially with Megan Mostow, who plays the fun-loving and free Sally Bowels. Overall, he gives a good, confident performance and is, for the most part, confident in the character. 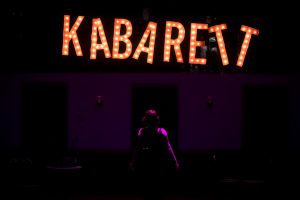 Speaking of Megan Mostow as Sally Bowles, let’s get into the highlights of this production. She  and Tommy Malek as the Emcee are the hands-down standouts in this production. Starting with Malek, though I’m not 100% onboard with his take on the Emcee (which very well could have been a directorial choice, it’s hard to tell sometimes) I still enjoyed his performance. I envision the Emcee to be an asexual, slithering, lurking character, who’s always in the shadows in the background, but I didn’t get that with this character. Not to say that it was wrong, because there is no denying Malek gave 100% effort and plays this character to the hilt. Though I like my Emcee to be different, that’s not to say I was not entertained and invested in Malek’s take. He took this role and hit the ground running. He has a great comprehension of this sleazy night club entertainer, who might have a big heart underneath all the makeup and sleaze, and he embodies him fully. He’s comfortable in the role and it helps to bring him to life. Vocally, Malek gives an impressive performance, especially in his featured numbers such as “Wilkommen,” which opens the entire show and sets the mood nicely, the high-energy, pulsating “The Money Song,” and the cute, “If You Could See Her,” all come off nicely with a tight performance from Malek. Overall, he gives a strong, praise-worthy performance that isn’t to missed.

Finally, we get to the iridescent Mostow, who has a deep and clear understanding of her character and, oh brother, does it show. She completely embodies this character and makes it her own. Vocally, Mostow is a powerhouse. She’s not belting and screeching through her songs, but using her amazing lower register and seemingly effortlessly sings through each other featured numbers as I get lost in her tone. She plays the fun and flirty “Don’t Tell Mama” with just as much feeling and enthusiasm as “Maybe This Time” down to the stellar performance of the ever popular “Cabaret”. Mostow truly becomes this character showing she’s done her homework and knows who this character I giving a strong, confident performance. Hats off and a heartfelt kudos to Mostow for a job very well done. You don’t want to miss her in this role.

Final thought… Cabaret is not a production you want to miss this season. It’s well put-together and each and every ensemble member gives 100% dedication and effort. The musical numbers are tight and engaging, performed by a top-notch cast. Whether you’re familiar with the piece or not, you will be entertained and maybe even learn a little something about compassion and acceptance along the way. It’s relevant to today’s goings on and it’s a relatable story to get into. Get your tickets now and come to the Cabaret, old chum! Life is a cabaret!

This is what I thought of Silhouette Stages’ production of Cabaret… What did you think? Please feel free to leave a comment!