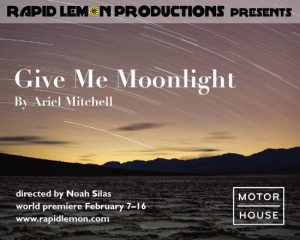 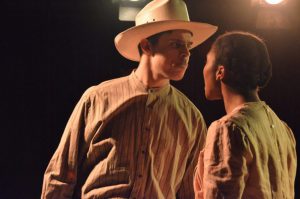 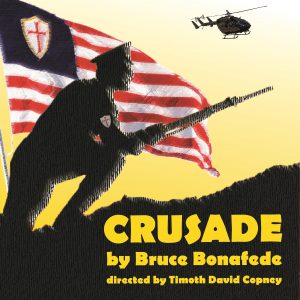 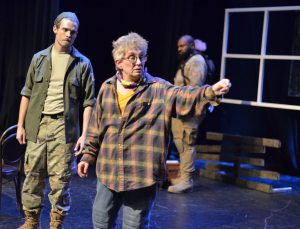 What would happen if policy and thought tipped one way or another in a country divided? We’re seeing more and more of this each day in real life America, but what would happen if it went to extremes? This question is explored in Rapid Lemon Productions’ latest offering, Crusade by Bruce Bonafede, Directed by Timoth David Copney. It’s a story of division and how humans, soldier or civilian, act in times of war and unrest.

Briefly, Crusade concerns itself with a country at war, civil war, really where the Christians have taken over government and have outlawed every other religion and anything they consider to be hedonistic. A small band of soldiers find themselves in a tucked away cabin lived in by a former professor of genetics who just wants to be left alone. The rag-tag group is then joined by a Christian prisoner and all of their morals and beliefs are tested in one way or another as each tries to find their way out of a desperate situation. 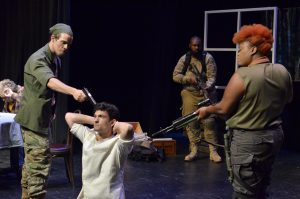 Lights and sound have major roles in this production and Lighting Design by Brad J. Ranno and Sound Design by Max Garner are spot on. Each subtle change of light sets the mood for each scene and adds value to the production, as a whole, while Garner’s impeccable Sound Design adds to the story and does not hinder it in any way. The designs blend perfectly into the staging and keeps the production engaging making for fantastic work from both Ranno and Garner. 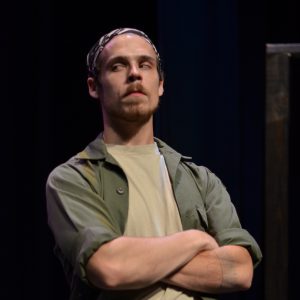 In tandem with the Light and Sound Design, Set Design by Sebastian Sears fits this production perfectly. It’s simple with no bells and whistles. Sears transports the audience into this little run down cabin in the woods and his set piece choices integrate flawlessly with the story with old furniture, dark colors, and simple pieces. I love the space at Baltimore Theatre Project but I can see how it might be tricky to create sets upon, but it didn’t hinder Sears and he should be applauded for his efforts.

Direction by Timoth David Copney is absolutel superb. It’s tough material, but Copney has a definite understanding of it and presents it beautifully. His staging is near flawless and he keeps the action moving and engaging for the audience. It’s clear he has a tight grasp on these characters as his guidance helps each actor make their characters personable and believable. Pacing is on point and Copney’s knowledge of the stage is clear. Kudos to Copney for a job quite well done. 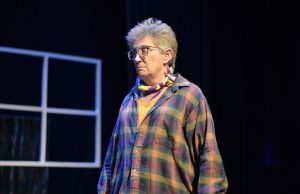 Moving on to the performance aspect of this piece, it’s worth mentioning that all six ensemble members bring their A-game to this production and all give strong, confident performances of this heavy material. Eric Boelsche as Josh, the communications man in this small group, is believable and natural in this role and the delivery of his monologue is touching and true. Flynn Harne as Mitch, the leader of this troop, has a great command of the stage and his presence is bold. 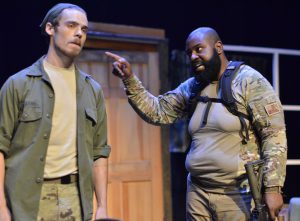 Emma Hawthorn takes on the role of Galen, the civilian and former professor of genetics who is working on a scientific history of the world, and Stephen Kime tackles the role of Kershaw, the Christian soldier captured by one of the soldiers. Hawthorn is stupendous in this role. She takes it and makes it her own with all the emotion and mannerisms that are required. She works well with her cast mates and makes the character someone with whom one can empathize. Kime, who actually replaced the original actor late in production, knocks it out of the ball park. I would have thought he was with the production from the beginning, so, he was certainly a lucky find! Kime is consistent with his stoicism and is unshaken in his character. He is a highlight in this production with his strong presence and focused performance. 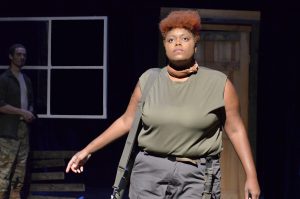 Rounding out the cast are standouts Lola Reign as Britt and Noah Silas as Hector, both weary soldiers in this small troop. Silas couldn’t have been better cast in his role, maybe it’s because of his great stage presence, but his was the most believable as a soldier and he certainly has the rugged look. But beyond that, his character and his character’s conflict is heart wrenching and he portrays it beautifully. He’s certainly one to watch in his characters climactic scene and his emotion is absolutely authentic. In the same vein, Reign is spot on as a young woman full of rage. Her delivery of the heavy dialogue oozes anger and wrought. Kudos to both Reign and Silas for outstanding performances and I hope to experience more performances in the future. 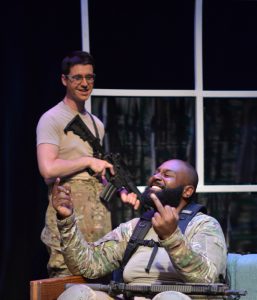 Final thought…  Crusade from Rapid Lemon Production was a Baltimore Playwrights Festival submission and is a heavy production that makes you think about faith, loyalty, and what you would do if you were caught in between. I, personally, was not offended by any of the content, but I can see where certain folks might be. I’m speaking on the portrayal and interpretations of the Christians and though only one is actually seen in the flesh, they are spoken of throughout the piece. Christians are made out to be Nazi-like figures who are blinded by their faith and, though, some are, many, in my experiences, are not. Then, again the portrayals of the soldiers aren’t any more flattering, making them out to be killers who have a grudge against anyone with faith, because of their own, personal reasons (some good, actually, in my opinion). Don’t get me wrong, the writing is stellar, if not (seemingly) a tad one-sided, but makes up for itself in the climax. The production value is superb in its simplicity and the performances are top notch. If you’re familiar with the old hymn “Onward Christian Soldier,” this piece gives it an entirely new meaning. Get your tickets because you’ll want to see this production.

Note: There is a content advisory stating “Crusade is a fictional story, but on whose themes are increasingly real to us today. It’s a violent story. Its characters deal with mental and physical torture, rape, mass murder, and other horrible things that happen in war. Our production addresses all of these; and specifically, employs very realistic-looking but nonfunctional prop weapons and a variety of lighting and sound effects which may be disturbing to some in our audience.”

This is what I thought of Rapid Lemon Productions’ production of Crusade… What did you think? Please feel free to leave a comment!

Crusade will play through August 18 at Rapid Lemon Productions, Baltimore Theatre Project, 45 W. Preston Street, Baltimore, MD. For tickets, you can purchase them at the door or online.