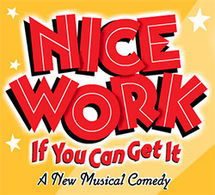 Chances are, somewhere in your life you’ve at least hear a George and Ira Gershwin tune, whether in a movie, a wedding, a gathering of some kind, or you may have even had a chance to experience an actual Gershwin show. Cockpit in Court’s latest offering, Nice Work if You Can Get It, with Music and Lyrics by George and Ira Gerswhin, a Book by Joe DiPietro, and Inspired by Material by Guy Bolton and P. G. Wodehouse, is a jukebox musical, of sorts, of songs by the Gershwin brothers and sets it in a cute, funny story of a bygone era. Under the charge of Director Eric J. Potter, Music Director Gerald Smith, and Choreographer Ilona Kessell, this is a production that takes you away for awhile and adds a little pizzazz to the everyday grind.

According to Broadway.com “Set in the 1920s, Nice Work If You Can Get It is the story of charming and wealthy playboy Jimmy Winter, who meets rough female bootlegger Billie Bendix the weekend of his wedding. Jimmy, who has been married three (or is it four?) times before, is preparing to marry Eileen Evergreen, a self-obsessed modern dancer. Thinking Jimmy and Eileen will be out of town, Billie and her gang hid cases of alcohol [in] the basement of Jimmy’s Long Island mansion. But when Jimmy, his wife-to-be, and her prohibitionist family show up at the mansion for the wedding, Billie and her cohorts pose as servants, causing hijinks galore.” 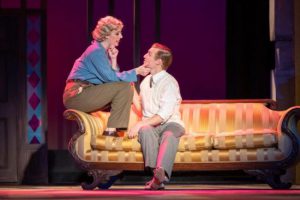 Costume Design by Tracy Bird of Stage Garb, Inc. is on point with this production. Set in the decadence of the 1920s, Bird has hit the nail on the head with all of the fashions and her attention to detail. Her efforts transport the audience to this fashionable era with every gown and pinstriped suit that graces the stage and she is to be applauded and revered for her precise and well thought-out design.

Michael Raskinski’s Set Design, too, is beyond praise-worthy. With clever set pieces that fly in and out easily and quickly, the pacing is kept on point and the Art Deco style that Rasinski has chosen adds immense value to the production as a whole. The entire design from set pieces to the simple, but detailed proscenium façade, this design is top notch and Rasinski is to be commended for his well planned efforts.

A particular highlight of this production is, indeed, Choreography by Ilona Kessell. It is high-energy and engaging and this ensemble has the ability to pull it off. I am quite impressed with the precision in which Kessell’s fun and well-rehearsed choreography is executed. Kessell knows her cast and their abilities, which is probably the most important aspect of a Choreographer’s job, and her routines are filled with variety and traditional styles that keep the audience interested. Kudos to Kessell for this superb choreography.

Many, if not all of these Gershwin tunes are familiar to most, and Music Direction by Gerald Smith is splendid as this cast manages to breathe fresh life into each number. Harmonies are spot on and featured numbers emit the dynamics and emotions that the Gershwins intended. This production has also managed to round up a very impressive pit orchestra consisting of Tim Viets (Conductor), Michael DeVito (Keyboard 1), Michael Clark (Keyboard 2), Dieter Schodde (Percussion), Steve Haaser and Helen Schlaich (Reeds), Jay Ellis (Trombone), Tony Neenan and Ginger Turner (Trumpet), Matthew DeBeal (Violin), and Bob DeLisle (Bass).

The book for this piece is light and fluffy, and is, in a word, trite, but that’s to be expected with jukebox musicals, right? Maybe not, but this one is. Crazy For You, the other Gershwin musical, has a meatier book, and probably got dibs on most of the best George and Ira Gershwin songs, but this piece is not without it’s merits. The thing that helps this production Direction by Eric J. Potter and he really has a good grasp on this material. It’s an old-fashioned song-and-dance type show, happy ending and all that, but Potter has taken these songs and this book and weaved them into a well put-together, polished production with near perfect pacing and character work that is superb. Under his charge, the classic music is given a fresh coat of paint and it shines bright making for an entertaining, energetic evening of good theatre. Snaps to Potter for a job quite well done.

I’d be amiss if I didn’t mention that this production of Nice Work If You Can Get It has an absolutely phenomenal Ensemble consisting of Mary Margaret McClurg, Olivia Aubele, Angela Boeren (Dance Captain), Sarah Jones, Emily Machovec, Rachel Verhaaren, J. Purnell Hargrove (Dance Captain), Ryan Christopher Holmes, Conner Kiss, Shane Lowry, and Josh Schoff. These folks dance and sing their way across this stage effortlessly, will grab you from the moment the curtain goes up, and bring you into the performance with them. Hands down, one of the best and able ensembles I’ve seen in community theatre in a good while. Kudos to all for their hard work and excellent abilities. 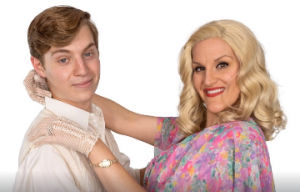 Taking on the role of the seemingly bumbling, sensitive Chief Berry is Thomas “Toby” Hessenauer and he does quite well with the role, even if his accent or lack of accent is noticeable. Actually, I’m not sure if he was going for an accent or not, but one seems to be trying to peek out once in awhile, but I might be hearing things. Regardless, Hessenauer is a wonderful actor and understands this comical character and pulls him off nicely. Vocally, Hessenauer is not a powerhouse in this particular production, but he does hold his own and brings comedy into familiar numbers such as “Let’s Call the Whole Thing Off.” In the same boat is Lynn Tallman as Eileen Evergreen, the snooty, oblivious fiancé who needs to be put in her place. Evergreen has a good grasp on what her character is about and portrays her beautifully. Again, the attempted accent, if that’s what it can be called, may hinder her witty dialogue, at times, but overall, she gives an admirable performance. She certainly makes you take notice with her charming featured number “Delichious,” on which she gives a strong delivery. 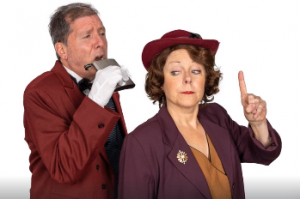 Taking on the more non-savory characters in this story are Patrick Martyn as Cookie McGee, Gary Dieter as Duke Mahoney, and Casey Lane as Jeannie Muldoon. First off, these folks couldn’t have been cast better. Martyn and Dieter completely embody their characters and I believed them from the moment they stepped onto the stage. Both play the somewhat bumbling criminals well, with impeccable comedic timing, and had me laughing out loud throughout their performances. Lane, too, as the gold-digging, deceived young woman, is natural in this role and makes this supporting character something to take notice of. Dieter is definitely the stronger vocalist, shining in his humorous featured number, “Blah, Blah, Blah,” and Lane does very well, also, in the reprise of the same song and in the adorable “Do It Again.” Martyn, though not as strong, vocally, does give heartfelt and confident in his featured “Fascinating Rhythm,” and “Looking for a Boy.”

Highlights in this production are, hands down, John Amato as Senator Max Evergreen, the staunch, uptight father of the fiancé, Jane E. Brown as Duchess Estonia Dulworth, the self-righteous anti-liquor crusader, and Joan Crooks as Millicent Winter, the strong, confident mother of the leading man. As with the rest of this cast, these folks were cast perfectly in their roles. Amato exudes the rigidness this straight-man character needs, but his comedic timing is superb, getting befuddled when needed and trying to take charge of the situation. His booming, smooth voice just adds to this character and his natural delivery is like butter. In tandem with Amato’s performance, Brown’s portrayal of Duchess Estonia Dulworth is absolutely and completely on point. She has embodied this character and has made it her own. Her strong stage presence and thoughtful, though seemingly effortless portrayal of this character is make her one to watch in this production. Not only does she have the staunchness down, her comedic timing is just as wonderful. Vocally, Brown is a powerhouse and one can help but notice her powerful technique and know-how in her featured number, “Demon Rum” (with impeccable and superb back up from the ensemble), and the side-splitting “Looking for a Boy.” In the like, Crooks, who only shows up toward the end of the piece, makes her short time on stage well worth it. She, too, embodies this character of Millicent and takes charge of the stage from the moment she steps onto it. This trio of which I call the “previous generation” of this story, is well-cast, and well performed and I can’t give enough kudos to Amato, Brown, and Crooks. 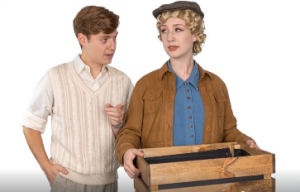 Rounding out this praise-worthy ensemble are standouts Lizzy Pease as Billie Bendix and J. Bradley Bowers as Jimmy Winter. It’s easy to see both of these actors are disciplined and hard working as it shows in their portrayal of these young lovers that carry the show. Pease knows her character well and portrays her with just the right balance of roughness and tenderness. Again, the story is fluffy, but Pease makes the most of her character and glides through her performance naturally, with a distinct delivery and ease. She comfortable on stage and gives a strong showing. Vocally, she’s top notch with a voice that soars throughout the theatre, especially in her featured numbers, the poignant “Someone to Watch Over Me,” and the cutesy duet, “S’wonderful.” Overall, her performance is grade-A and should not be missed.

In the same vein, Bowers knocks it completely out of the ball park into the next town in his performance. Completely at ease in this character and a definite knowledge of the stage, his performance leaves me wanting more. He’s not simply going through the motions of the script, but becomes this person, Jimmy Winter, and his performance alone is worth the price of admission. His natural talent, strong stage presence, and confidence drives his performance and he’s a fun to watch. He’s what folks might call a triple-threat… he can act, he can sing, and boy he dance. Who could ask for anything more? (See what I did there?) Vocally, Bowers is phenomenal with a smooth, silky baritone, with a great range that makes listening to all his numbers a joy, especially his renditions of “Nice Work if You Can Get It,” “I’ve Got to Be There,” “I Do, Do, Do” (with absolutely perfect backup and harmony from the gentlemen in the ensemble), and the aforementioned duet, “Let’s Call the Whole Thing Off.” I’m looking forward to seeing more stage work from Mr. Bowers in the future.

Final thought… Nice Work if You Can Get It is a high-energy, old-fashioned song-and-dance kind of show that will have you tapping your toes, feeling nostalgic, and take you a allow you to escape for just a couple of hours, at least. Casting is spot on, Set Design is brilliant, Choreography is engaging, and the talent and abilities of the entire ensemble are top notch. The production is polished and fun for the entire family. Though, the story and script can be a bit trite and fluffy, it’s still a fun piece with good message. Whether your familiar with the work of the Gershwins or not, you’ll be thoroughly entertained and humming as you leave the theatre.

This is what I thought of Cockpit in Court Summer Theatre’s production of Nice Work if You Can Get It… What did you think? Please feel free to leave a comment!

Nice Work if You Can Get It will run through August 4 at Cockpit in Court Summer Theatre, CCBC Essex, Robert and Eleanor Romadka College Center, F. Scott Black Theatre. For tickets call the box office at 443-840-ARTS (2787) or purchase them online.