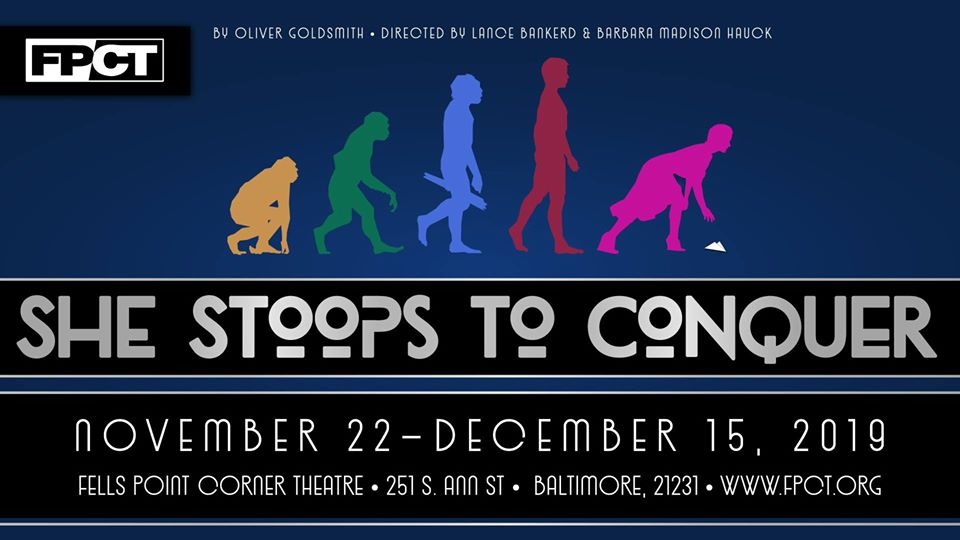 In today’s climate, the empowerment of women is of the utmost importance (along with the empowerment of many other under-represented communities), but we mustn’t forget that folks have been talking and writing about this sort of thing for centuries. In Fells Point Corner Theatre’s latest offering, She Stoops to Conquer by Oliver Goldsmith, Directed by Lance Bankerd and Barbara Madison Hauck, we are reminded of the struggles and ingenuity of woman through the ages.

Briefly, in She Stoops to Conquer, Mr. Hardcastle wishes for his daughter, Kate, to marry Sir Charles Marlow, a shy but attractive young man. Marlow and his friend Hastings travel from London, but are tricked by Tony Lumpkin, Hardcastle’s step-son, that Hardcastle’s home is an inn. Hastings is involved with Constance, who is being pushed by her aunt, Mrs. Hardcastle to marry Tony, whom she is not keen on. While thinking Hardcastle’s home is an inn, Marlow and Hastings behave badly, but when Marlow meets Kate, he is shy and awkward. Kate disguises herself as a barmaid to see how Marlow really acts and he’s the complete opposite. When he learns her true identity, he is embarrassed. Eventually, after some slapstick and farce, the confusion is cleared up with a happy ending. Make sense?

I didn’t know much about this piece aside from recognizing the title, but have come to the conclusion it’s not my cup of tea, so to speak. The attempts to update this piece seem only to do with costuming which didn’t make much sense, at best. I wasn’t sure where Costume Designer Rache Austin was trying to go. It was a mix between 80s punk, 70s glam, and a dash of the Roaring 20s that was all over the place. The bold colors are nice to look at, and, in general, it’s a creative, bold, and consistent design, but since the dialogue stays pretty much in tack, this particular design doesn’t seem beneficial to the piece as a whole. It’s not a bad design (and I can tell Austin knows the craft well) just a bit ill-fitting for this production.

Set Design by David Shoemaker is spot on and he is to be commended for his use of the space. Being a farce, multiple entrances and exits are required and Shoemaker has managed to give us as many as we needed, no more, no less, and his base design helps move the piece along nicely adding and subtracting appropriate set pieces, when needed. Kudos to Shoemaker for a well thought out design. 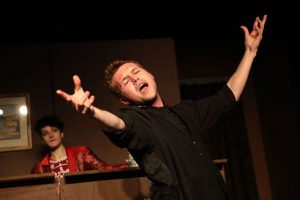 Taking the helm of this production are veteran Director Lance Bankerd and novice Director Barbara Madison Hauck. Now, Directing a period piece can be a challenge and updating a piece can be even more of a challenge and must be handled delicately. Overall, this production is a good production and everyone involved is giving 100% effort, but, with that said, it doesn’t seem to live up to its full potential. The staging is suitable and the pacing is on point, but the characters aren’t always fleshed out and believable, on the whole, save a few. Technically, Bankerd and Hauck do give a phenomenal showing with tight staging, but the character work is lacking. It seems these actors are simply reciting the dialogue without knowing exactly what it means. This could be an actor problem, but in the end, the Director(s) should be watching closely and guiding these actors. Regardless of these criticisms, the production value is terrific and Bankerd and Hauck should be proud of their efforts and they should be commended for tackling such a challenging piece and Hauck is to be applauded for her Directorial debut. I’m looking forward to seeing more from both of these fine Directors.

Moving on to the performance aspect, as stated, the entire ensemble gives a valiant and concerted effort and all are to be commended for their commitment to their roles. Gareth Kelly, Ari Juno, Christian O’Neill, and Thomas Peter work well in their supporting roles and help move the action along nicely with impeccable comedic timing and understanding of the quick entrances and exits of farce. They all work well with and off of each other and it’s easy to see they are enjoying every minute. All are to be commended for their work on this production.

Corey Hennnessey takes on the role of the impish, childish Tony Lumpkin who starts all the trouble with his mischief and though Hennessey has a tight grasp on his character, he plays him a little too nonchalantly with grand gestures and flamboyancy that, at times, can be a bit much for the intimate space. That being said, he does have a great presence on the stage and is absolutely dedicated to this role giving a strong, confident showing.

Elizabeth Norman tackles the role of the strong-willed, intelligent Kate Hardcastle and though she seems to understand the character, in her delivery of the dialogue, I must admit I’m not convinced she has a tight grasp of the text. Much of her performance seems to be simply reciting the text rather than a full understanding of what she’s saying and the connection and authenticity is lost. However, she does have a solid presence and is confident on stage making for a delightful performance.

Taking on the role of Constance, a ward of the Hardcastle’s who doesn’t seem to have say in what happens in her life, is Hannah Folger and she portrays this character beautifully. Her delivery is natural, and her comprehension of this character is clear. Folger knows her way around the stage and is comfortable in this role making for a robust and charming performance.

A couple of highlights in this production are Richard Peck and Lindsey Schott as Mr. and Mrs. Hardcastle and these two actors shine in these roles. Peck plays Mr. Hardcastle as the straight man in this piece and he plays him seriously enough that it enhances the comedy and his chemistry with his cast mates is impeccable. He knows this character and plays him splendidly with subtle but spot on reactions and mannerisms. In the same vein, Schott is hilarious as Mrs. Hardcastle, a woman who is trying to stay on top of things and in control. She takes the role and makes it her own and balances Mrs. Hardcastle’s deviousness and tenderness nicely. Schott knows this character well and gives a durable and entertaining performance, overall.

The standouts in this production are, hands down, Albert Lolu Collins as George Hastings and Ian Charles as Young Marlow. From the moment these two step onto the stage, it’s clear they are believable and committed to their roles. Collins is a bit hard to understand at times in his British accent, but he plays this character in a way that makes him likable from the start, and his understanding of his character, his presence and assurance makes for a strong performance.

Ian Charles is exquisite in his portrayal of Young Marlow and he is to be applauded for his efforts. His comprehension of the role, comedy, and farce are spot on and he seems to embody this character. He does quite well with the staging and every movement has purpose and that, in tandem with a natural, easy delivery of the dialogue make for an outstanding performance.

Final thought… She Stoops to Conquer is a piece of theatre that should be experienced by all theater makers and lovers at one time or another. I’m glad I’ve finally been able to experience it myself and the story is well put together. For being over 200 years old, it still makes a point and holds its own. This particular production has its flaws, but, overall, is a tight production with a dedicated cast and production team. The language (or use of language) may be unfamiliar at first, but still easy to follow if you pay attention. This is an important show that seemed to be ahead of its time concerning women empowerment, but it’s still relevant and makes sense for today’s audience. Through comedy and farce, this piece shows that, after 200 years, some things never change. If you want a fun, delightful evening of theatre, you’ll want to check out She Stoops to Conquer at Fells Point Corner Theatre.

This is what I thought of this production of She Stoops to Conquer at Fells Point Corner Theatre.… what do you think?