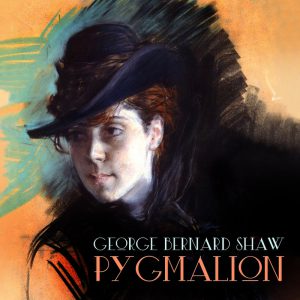 In this day and age, there’s no real distinction between how a woman should look and act and how a man should look and act, and there shouldn’t be, but some folks think so and they certainly did think so in the early 20th century. Not only the way one looks, but how one should act was also a product of the precise class distinction that went on around that same time. However, Spotlighters Theatre latest offering, Pygmalion by George Bernard Shaw, Directed by Sherrione Brown, breaks down that comfortable way of thinking and presents us with a opposing view that a person can indeed make changes to oneself to be whatever he or she wants to be, without losing those qualities that make them unique. Written in 1912, it’s a period piece, but, deep down, has a message that is timeless. 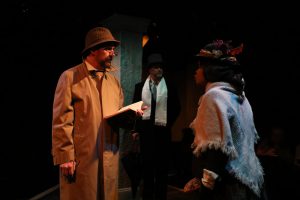 Now, I’m sure most of you are familiar with the smash Lerner and Loewe musical My Fair Lady and all the catchy songs that go along with it including “Wouldn’t it Be Loverly” and “I Could Have Danced All Night,” but… it all started with this play right here. Pygmalion, in a nutshell, takes us back to 1912 England where a brash flower seller is taken on by the sometimes harsh Dr. Henry Higgins and the gentle, caring Colonel Pickering to see if Higgins can transform her from a “gutter rat” into a duchess by simply changing the way she speaks.

Spotlighters always manages to impress me with their Set Designs and what they do with their intimate space, however, in this instance, Set Design by Director Sherrione Brown is a bit uninspired, but it is simple and works with the piece. However, in a piece such as Pygmalion where there is supposed to be a distinctive contrast between the streets of London and the parlors of high society, there’s not much change as this production uses simple but appropriate set pieces (as is the fashion at Spotlighters). To present locales and Brown has selected pieces that do this nicely, but the usual ambiance that presents any particular production throughout the theatre and immerses the audience in the story just seems to be missing. 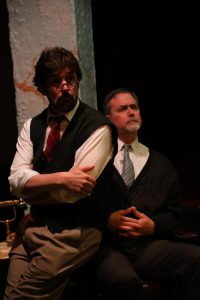 Set Design aside, Costume Design by Jenifer Grundy Hollett is splendid. She has managed to capture the time period and gives the main character, Eliza Doolittle a definite and precise change in look to show her transition. Her attention to detail is exquisite and she should be applauded for her efforts. I’d be amiss if I didn’t mention Hollett is also a performing ensemble member taking on the role of Mrs. Pearce, Henry Higgins level headed housekeeper and she is definitely a standout in this production. Though taking on a supporting role with limited stage time, she makes the most of her character and gives a strong, solid performance with a natural delivery of the dialogue that make her performance a joy to watch.

Sherrione Brown, who has taken the helm of this production really knows her stuff when it comes to this story. She has a strong comprehension of this material and her staging is smooth (with only a few clunky and lengthy scene changes) and the pacing of this two-and-a-half hour period piece is on point. She handles this well known story nicely and presents it in an easy-to-follow manner. She guides this production with an assured hand and seems to get the best performances from her ensemble. Kudos to Brown for her Direction of this production. 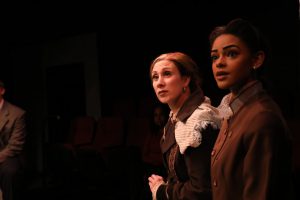 Speech and accent are a huge aspect of this story; after all, it’s what Higgins thinks makes the difference between a poor girl and a duchess. Though the performances, overall, in this production are poised and polished, the accents do fall a bit short. They’re there… I can hear them, but I don’t buy them. The ensemble is working hard and their efforts are not for naught, but when it comes to dialect work, they probably would have been well served with a bit more rehearsal. The traditional cockney accent is a beast so, unless there is a certain amount of time to master it, which is just about impossible during any rehearsal schedule for a show, there will always be flaws but, again, that’s not to say the performances weren’t good, because they certainly were in other aspects. 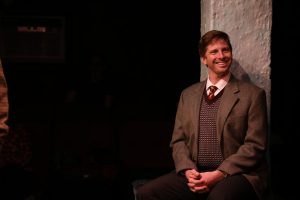 In the way of supporting characters, portraying the upper-crust Eynsford Hills are Melissa McGinley as Mrs. Eynsford Hill, Caelyn Sommerville as Clara, and Carlo Olivi as Freddy, then there’s Sarah Weissman who takes on various roles such as a parlormaid and elegant hostess. Weissman fills out the ensemble well but her performance is scripted and stiff at times. She understands why her characters are there, but seems to be going through the motions for most of the production. McGinley seems to understand her character as the mother of young adults but her performance falls a little flat. She’s a bit scripted making for an unnatural delivery, but she does portray the gentleness and dignity the character requires. Sommerville, as Clara, a young woman of high society, does a terrific job of emoting the snobby, spoiled, holier-than-though attitude with slivers of politeness, especially with other members of the upper class. Sommerville is comfortable in this role though her speech seems to be off as if she’s speaking in a voice higher than her own natural voice, but other than that very minor flaw, her performance is delightful. Olivi, as the young and in love Freddy shines in this role. His authentic portrayal of this lovelorn character is believable and it’s easy to see he’s giving 100% effort in his character. He looks the part, he acts the part, and he gives a fine, sophisticated performance. An honorable mention goes out to Don Lampasone, who, a little birdy tells me, stepped into various small roles two nights before opening and gives an impressive, authentic performance as a Taximan, a Constable, and a lower class comrade of Eliza Doolittle’s. Though he keeps his script cleverly hidden in a newspaper, that doesn’t hinder his abilities and he gives a praise-worthy performance and I’m quite sure that script will be out of his hands quickly. My hat off to you, Mr. Lampasone, for stepping in and stepping up. 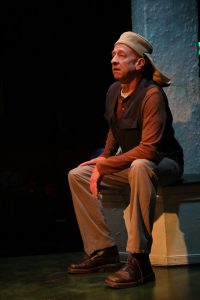 Rich Espy takes on the character of the lazy, living-in-the moment Alfred P. Doolittle, who, at heart, is a con-man that reluctantly comes into some money and is forced into being respectable. Espy’s portrayal is charming, as this character is naturally charming, if not sketchy at times, and his take causes the audience to dislike him then because of his transition riles up sympathy so, with good writing and a good performance, Espy pulls this character off nicely.

Rounding out the ensemble, Hillary Mazer who takes on the role of Mrs. Higgins, Randy Dalmas tackles the loveable and kind Colonel Pickering, and Phil Gallagher portrays the no-nonsense, logical Henry Higgins. Mazer is believable in her role as a matriarch who does care about her son, who embarrasses her every chance he gets, but has no qualms in telling him so and her chemistry with Gallagher is spot on. She plays this role with a certain finesse that makes her a likeable character and makes for an enjoyable performance. 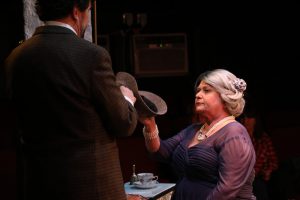 Randy Dalmas seems to embody this character of Colonel Pickering and the way he plays this role makes Pickering endearing from the start. His work with and off of Gallagher’s Higgins is wonderful and he gives a strong, confident performance throughout. Speaking of Gallagher, his portrayal of the crotchety, straight forward Henry Higgins is outstanding. He really captures the stuffiness of the character with that hint of caring that he tries so hard to hide. Henry Higgins is such a complex character, he’s easy to play to heavily stern and it’s the balance an actor needs to find within him that Gallagher does near flawlessly. His comedic timing is on point and his calm chemistry with Linae’ C. Bullock helps make his performance that much more superb. 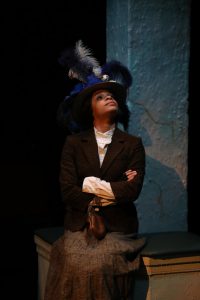 Finally, we have a highlight of this production, Linae’ C. Bullock, who takes on the challenging role of Miss Eliza Doolittle. I don’t mind saying Bullock is truly marvelous in this role. She impressively spits out the cockney, not necessarily perfectly, but near perfect and it makes the transition this character makes all the more believable. She has a good grasp of this character and her portrayal gets across the message I think this piece wants to send which is we may change on the outside but we’ll always be who we are on the inside. She gives a high-energy performance that balances out her more subdued portrayal later that is required of the character. She manages to get the audience invested in Eliza early on and we’re rooting for her throughout. She works very well with and off of Gallagher, who makes it easy with his performance, as well as with Dalmas, and the sincerity of her different relationships with both shine through. She’s certainly one to watch in this production.

Final thought… Pygmalion can be interpreted very different ways. On one hand, it’s a story of trying to change someone to better their station in life, in the other, it’s a story of what matters is on the inside and not the outside. Seeing as though it was written in 1912, it was probably the former, but the latter still rings true. It’s always challenging to produce a 100+ year old piece for a modern audience, but Spotlighters has managed to do it with finesse and charm. The production is simple when it comes to Set Design, but it just makes the performers work harder and they’ve certainly stepped up to the task. The production, as a whole, is polished and well put together from Costume Design, staging, and performance, it’s a delightful triste to a bygone era that teaches us you can take the girl out of [insert city/town/area name] but you can’t take the [insert city/town/area name] outta the girl! Definitely worth checking out!

This is what I thought of Spotlighters Theatre’s production of Pygmalion… What did you think? Please feel free to leave a comment!

Pygmalion will play through March 10 at Spotlighters Theatre, 817 St. Paul Street, Baltimore, MD. For tickets, call the box office at 410-752-1225 or purchase them online.