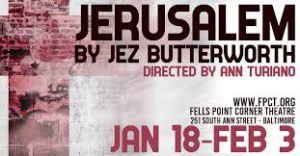 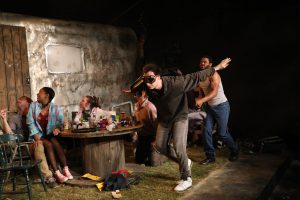 From what I could gather, briefly, Jerusalem takes place in Flint in one day, St. George’s Day, as well as the annual local county fair. Johnny “Rooster” Byron, a local drunk, addict, ne’er-do-well, and Pied Piper figure, knows his days are numbered on his land as the local officials want to evict him to make room for new development. His friends (some under-age) gather frequently throughout the day to relieve him of his supply of alcohol and drugs while his young son wants him to take him to the fair and a thug, the step-father of a missing girl, wants to give him a good thrashing. And… yeah… that’s about it. If anyone else has anything to add, please feel free to do so.

I’ll admit, this piece could be going over my head because I didn’t see or hear much of a plot, other than a stubborn dude, Rooster, played superbly by Ian Blackwell Rogers, saying “F**k You!” to the world and going about his business but Rogers plays him in a way that I was invested in him, much like his friends. A highlight of this piece is David Shoemaker, who takes on the role of Ginger, Rooster’s oldest mate who seems to understand him better than the others, and his natural delivery and take on the “sidekick,” true-friend character is phenomenal. Director Ann Turiano knocks it out of the ballpark with her staging and she keeps the piece moving smoothly throughout, and it’s easy to follow, but I think it’s the script that I can’t figure out. 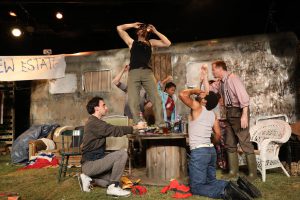 Set Design by Christopher Flint and Scenic Art by Kim Speaks also seems to be a bit much for the space. Don’t get me wrong, it’s an outstanding design and the audience is transported to this trashy little plot of land in the English countryside, but it may have been too much for the intimacy of Fells Point Corner Theatre. Authentic, no denying, with a full trailer façade (which is impeccable), and turf covered stage with vines and trees strewn about, but the shit load of just about everything including an old commode, seems to draw more attention from the action than needed. 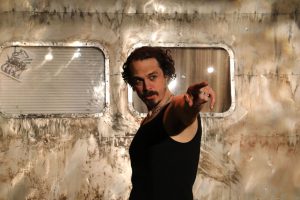 Performance-wise, this is a large ensemble and, yes, some are more apt than others but, overall, the entire ensemble works well together to create this motley crew that follows this charismatic leader… almost sounds cultish, doesn’t it? The dialects were 50/50 and I lost a lot of dialogue because of it, but not enough that I still couldn’t follow the story. Most of the actors and actresses were apt enough to be believable British-folk, and honestly, depending on where you are in Great Britain, it’s kind of difficult to understand the different dialects anyway, so, kudos on authenticity. The character work is commendable such as Nate Krimel as Lee and Terrance Flemming as Davey, the young, party-boys, and Sean Coe as Professor and Michael Salconi as Wesley, the older friends of Rooster, who have been around and seen most, if not all.

Overall, the production value and performances were admirable and the show itself is entertaining. My frustrations with this piece probably root in my not getting what the show is about but, production-wise, Turiano and her cast and crew have put on a polished, thoughtful production that you should check out.

Final thought… Jerusalem, though entertaining with splendid performances, just isn’t my cup of tea. It seemed to be a good story of standing your ground and sticking it to the man, but there was a lot of stuff to get through to get to that message, (IF that’s the message, not to mention, it’s about a 3-hour journey (but with two intermissions to break it up, nicely). The set was immense for the intimate space, but I’m assuming the clutter is what they were going for, so, it works… in a way. Overall, it’s a well put-together production so I’m thinking it’s just the script I’m having second thoughts about but, Fells Point Corner Theatre always manages to put on a great show with fantastic production value so, I’d chalk it up to a success, with minor reservations, in the end.

This is what I thought of this production of Jerusalem.… what do you think?

From a different angle: The Bad Oracle or B.I.T.R. Sisters