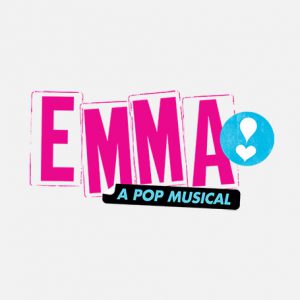 Classics are called classics for many reasons: great stories, great characters, and timeless conflicts, to name a few. However, as each year passes, the original stories slip farther away from us, but there are those who can take those classic stories and give them a modern twist that’s fun for today’s audiences. Jane Austen’s Emma was and has been a very successful novel through the ages and has been adapted for film and television, most notably, for me, is my favorite, the 1995 film, Clueless, starring Alicia Silverstone, but there have been many stage adaptations, as well, and one of those adaptations, Emma, A Pop Musical with Book and Concept by Eric Price, is being offered by Artistic Synergy of Baltimore. This production is Directed by Jake Schwartz, with Music Direction by Darwin Ray and Choreography by Jillian Paige and Joan Firestein.

Briefly, Emma, A Pop Musical is based on Jane Austen’s very successful novel, Emma, in which a young girl fancies herself a match-maker, and actually does okay, but is blind to her own feelings and relationships. Being a jukebox musical, the story is told through a slew of hits from bygone eras with a few current hits thrown in, for fun.

Noticeably, Costume Design by Margret Ward (NDP) is precise and consistent, adding a certain flair to this production and bringing it together, as a whole. Every character was costumed appropriately and, though this piece is set in a prestigious, private high school where there is a strict uniform code, each character is able to play with their wardrobe to make it more their own.

Choreography by Jillian Paige and Co-Choreographer Joan Firestein is energetic and engaging and the ensemble performs it well. Paige and Firestein seem to have brought out the best in their cast and that’s not a small feat by any stretch of the imagination. More importantly, the cast seems to have fun with this choreography, transferring that enthusiasm to the audience. Though much of the choreography is the entire cast (or whomever is on the stage) performing the same choreography through each song in lines, variety might be a bit lacking, but the energy and skill from both the able Choreographers and apt ensemble are absolutely apparent. Kudos to Paige and Firestein for their efforts.

A jukebox musical can be tricky to work with, especially with familiar songs and famous versions of those songs. However, Music Direction by Darwin Ray is impeccable. He has managed to introduce these bygone era songs to those in the audience (and cast) who may be to young to have experienced these tunes the first time around in a new and fresh way. He has a good grasp on the various styles (mostly pop… it’s in the title) and his knowledge shines through in the performances of this young ensemble. It’s worth noting the brilliant pit orchestra, as well, as they were superb in their performance as well. The pit orchestra included Lisa Learman (Keyboards), Wes Freeman (Trumpet), Tina James (Alto Sax), Darwin Ray (Conductor/Tenor/Clarinet), Harry Swartz (Trombone), Peter Weitzman (Guitar), Ethan Hart (Bass), and Chip Traub (Drums/Percussion). Kudos to Ray and all pit orchestra members for their excellent work.

Jake Schwartz, a first-time director, has taken the helm of this production and, overall, has done an admirable job. He seems to have a good understanding of the piece and presents it in an easy to follow, entertaining way. Scenic design isn’t much but when you have a minimal stage, you have to keep the audience interested in blocking and characters. Again, taking into account this is a first for Schwartz, his staging is a little bland with a lot of standing center stage and delivering dialogue, but it doesn’t hinder the production at all. He made some interesting casting choices, but all-in-all, everything works out for him. He may have a few things to learn here and there, but he’s set a strong foundation for greater things as long as he’s open to learning them.

Moving on to the performance aspect of this production, let it be known that this entire ensemble gives 100% effort and all seem to be having a blast on the stage, which, sometimes, can make or break a performance, but all of these performers are here to give the audience a legit theatre experience.

Lexie Merrifield as Harriet, they younger lovelorn friend that Emma takes under her wing, and Kyle LaPosta as Phillip, the egotistical, self-centered possible match for Harriet. Merrifield is a good fit for this character and she seems to understand what her character is going through, but her delivery is stiff, at points. However, her vocal stylings are one point. She has a strong, clear chest voice that soars throughout the theatre, but doesn’t seem as confident when she gets into her higher register. That being said, she shines in her featured numbers such as “Be My Baby” and the familiar Whitney Houston tunes, “How Will I know?” and “I Wanna Dance With Somebody.” LaPosta does a fine job portraying the narcissistic Phillip and gives a natural delivery of his dialogue making for a strong, confident performance.

The former student turned pop star, Frankie, is tackled by Terrell Chambers and he gives a phenomenal vocal performance as in Pat Benatar’s high-energy “Heartbreaker” and Lisa Loeb’s poignant “Stay.” His character work is solid and he is at ease on stage, giving a praiseworthy performance, overall. In tandem, Katie Sa­cco takes on the role of Jane, the new girl who is rough around the edges. Sacco is wonderful in this role and portrays the differences her character has from the other students nicely. Vocally, she holds her own and gives assured performances in her featured numbers such as “Bad, Bad Crush,” the only original song in the production.

Taking on the title role of Emma is Louisa Davis and Olivia Winter tackles the gender-bending role of Jeff, the seemingly smartest kid in school who, somehow, manages to get a substitute teaching position while still a student. Taking on the title role is a lot of responsibility for a young actor, but Davis has taken it in stride and gives a lovely performance. Her delivery of the text is natural and she seems to be comfortable in the role. Vocally, she could be a little stronger, especially in her higher register when she goes into head voice, but she understands the songs and that is clear in numbers such as Katy Perry’s “Roar” and Sarah Bareilles’ “Brave.”

Winter can always be counted on to give a great performance and this is not different. Though she may have been slightly miscast, vocally, she knows the character of Jeff and makes it her own. She definitely knows her way around stage and is confident in her performance. In this particular production, Winter’s vocal abilities were not highlighted, unfortunately. Many of her featured vocal parts were a bit too low for her and, I say it’s unfortunate, because I have the advantage of having heard her in previous productions where she has knocked it out of the park, vocally. She’s usually a powerhouse, but in this production, the music just doesn’t seem to fit her phenomenal abilities. Having said that, Winter’s performance is splendid, overall. She does her homework and brings her A-game to all of her performances and I, for one, can’t wait to experience more of her performances as she grows as a performer.

Rounding out the featured characters, the standout in this production is Maddies Saldaña as Miss Bates. This actress takes a supporting role, chews it up, and spits it out, making for a superb performance. From the moment she stepped onto the stage, I believed her. I believed her character and saw the effort and work she put into this role. She completely embodies this woman and is a joy to watch. Not only is her character on point, she is a vocal powerhouse. Her featured part is in songs such as Salt-n-Pepa and Des’ree mash-up “Whatta Man/You Gotta Be” and Vicki Sue Robinson’s “Turn the Beat Around” will leave you wanting more.  Her strong, pristine vocals fill up the theatre and her outstanding stylings seem effortless. She’s certainly one to watch in this production and I’m looking forward to seeing more performances from this actress in the future.

Final thought…Emma, A Pop Musical at Artistic Synergy of Baltimore is a fun, modern take on a classic to which most will be able to relate. The past song hits will having you feeling nostalgic but also discovering new meanings within the story. If you’re familiar with the story of Jane Austen’s Emma or not, you’ll be thoroughly entertained by this watered-down yet thoughtful take on the material. The song choices are spot on and the performances from this young cast are quite admirable. If you’re looking for a break from all the hustle that summer can bring (even though we should be relaxing), take a trip down to Artistic Synergy of Baltimore for a pleasant, entertaining night of theatre that will have you toe-tapping and dancing in your seat.

This is what I thought of Artistic Synergy of Baltimore’s production of Emma, A Pop Musical… What did you think? Please feel free to leave a comment!

Emma, A Pop Musical will play through August 11 at Artistic Synergy of Baltimore, Prince of Peace Lutheran Church, 8212 Philadelphia Road. For tickets, purchase them at the door or online.