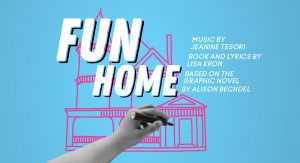 If you ask anyone about their family, it’s rare someone will come back with, “Oh, my family’s just your everyday, normal family.” If they do, they’re probably lying. Every family has its quirkiness. Sometimes it’s what makes us love them, other times it makes us hate them, but there’s no changing it and we learn to deal with it, or we don’t. It’s all up to us. When it comes to homosexuality, it can get tricky for some, depending on the family. Speaking from experience, it was a breeze for me, but I know there are others who have had a more difficult time. In Baltimore Center Stage’s latest production, Fun Home, with Music by Jeanine Tesori and Book & Lyrics by Lisa Kron, we get a glimpse into one family’s story of a lesbian daughter and her closeted gay father with the background of a funeral home in an ordinary town in Pennsylvania. This production is Directed by Hana S. Sharif, with Music Direction by Evan Rees, and Choreography by Jaclyn Miller. 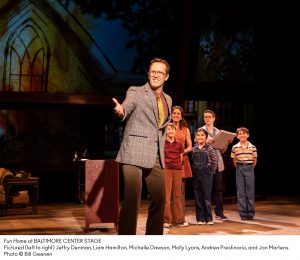 Briefly, Fun Home is based on an autobiographical graphic novel of the same name by Alison Bechdel concerning her complex relationship with her closeted father in the mid to late 70s in a small town in Pennsylvania. Through flashbacks, of childhood and college years, the present day 40-something Alison tells the story of her own coming out and coming to terms and of her own father’s coming to terms, as well as her own realization that her beginning was his end.

Scenic Design by Scott Bradley & Projection Design by Hana S. Kim is simple, but stellar. Bradley has managed to use a sparse stage and set pieces to represent various locations in the old Victorian house and their use of the trap doors to bring in different pieces such as a representation of an old car and living room is quite clever. It keeps the stage clean and the transitions smooth as not to hinder the action of the piece. The carefully selected projections and animations add great value to the piece and, running in tandem with the action and dialogue, adds variety to the setting and immerses the audience in each scene. Bradley and Kim are to be commended for their efforts. 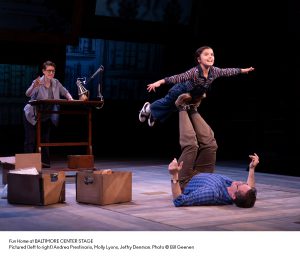 Karen Perry’s Costume Design manages to take the audience from the past to the present and back again, flawlessly. The 70s (much like every other decade) had a certain style and Perry has captured this look in a way that isn’t campy (except in one number, “Raincoat of Love” in which it is required – gold platforms and all) but authentic and it’s kind of a cross between modern and vintage which works beautifully for this piece. Her instincts are spot on and kudos to her for her design.

Though a production like Fun Home doesn’t require much choreography, Choreographer Jaclyn Miller has taken those bits that do require it right back to the era in which they take place. Reminiscent of The Brady Bunch or Partridge Family (though more of the former), or even the Jackson 5, Miller has created engaging and upbeat moves for the ensemble in numbers such as “Welcome to the Fun Home” and “Raincoat of Love” and the results are delightful. “Welcome to the Fun Home” consists of only children but they managed the choreography beautifully which tells me Miller knows her cast and fashions dances that will enhance their performances, and it does indeed. The fun, fluffy, bubble gum pop “Raincoat of Love” is no different and looks as if it were snatched off a music special of the 1970s. Again, there’s not much choreography to speak of, but what Miller has put on the stage is splendid and adds that extra “oomph” to an already engaging show. 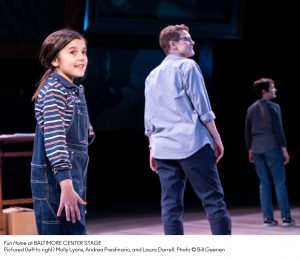 Evan Rees takes the reigns as Music Director and his work on this production is terrific. Musically Directing a Tony award winning piece is no small feat but Rees has stepped up to the challenge and has accomplished the goal. It doesn’t hurt that his cast is musically apt, and Rees has guided them to beautiful and emotional performances making for an very entertaining evening of theatre. Shout out to the exceptional orchestra of this production including Alex Aucoin (Percussion), Andy Axelrad (Reeds), Zack Branch (Basses), Amelia Giles (Violin/Viola), Gerry Kunkel (Guitars), MaryAnn Perkel (Cello), and Even Rees, himself, on Keyboards and serving as conductor.

Taking the helm of this production is Hana S. Sharif and her Direction makes it clear she has a hearty comprehension of this material and her presentation is impeccable. The pacing is upbeat when it needs to be and slows down when required but always engaging. Sharif understands telling a story in flashbacks and jumping back in forth in time and presents it in a way that is easy to follow making for smooth transitions and story-telling. 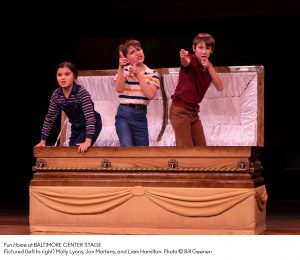 Moving on to the performance aspect of this piece, the younger members of this ensemble consist of Jon Martens as John Bechdel and Liam Hamilton as Christian Bechdel and these young gentlemen are already setting themselves up for successful careers. Both boys portray their supporting characters with confidence and ease making them a joy to watch during their scenes and especially their fun performances in numbers like “Welcome to the Fun Home.” They hold their own throughout and give strong performances.

Two other supporting roles are taken on by Shannon Tyo as Joan and Justin Gregory Lopez as various characters. Tyo is clearly comfortable in her role as she delivers her dialogue naturally and she puts the audience at ease with her portrayal of this friendly, but straight forward character of Joan, the love interest of Alison. In the same vein of authentic portrayals, Lopez shines in his various roles, showing his ability to play different characters exiting and entering only moments apart. He’s believable in his portrayals and, vocally, Lopez is a powerhouse as he exhibits in his featured number, the nostalgic, upbeat “Raincoat of Love.” Kudos to both Tyo and Lopez for jobs very well done. 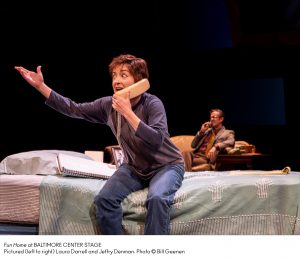 Through flashbacks, Laura Darrell as Medium Alison and Molly Lyons as Small Alison give exquisite performances. Darrell, though looking a little older than the oldest Alison, gleams as the college aged Alison and completely embodies her role. Her rendition of the poignant and humorous “Changing My Major” is a memorable one and shows off her beautiful, strong vocals. She has a deep understanding of her character’s conflicts and portrays them effortlessly. Also, the young Lyons is brilliant as the youngest version of Alison and gives a confident performance well beyond her years. Vocally, Lyons stands her ground and belts out a near flawless “Ring of Keys” making for an impressive and charming performance, overall. 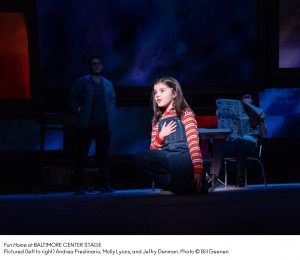 A definite highlight of this production is Michelle Dawson as Helen Bechdel, the matriarch of the Bechdel family and a woman who is just trying to keep her family together, in spite of her husband. Dawson’s performance is superb as she emotes the emotion and strife this character is feeling throughout. Her gentleness with the character is in beautiful contrast of the obvious turmoil she is feeling inside. Her strong and confident performance of “Days and Days” in the second act is show-stopping and makes the audience take notice. Dawson is to be commended and applauded for her efforts in this role. 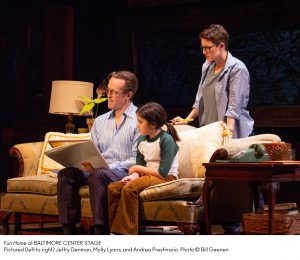 Standouts in this production are Jeffry Denman as Bruce Bechdel and Andrea Prestinario as Alison, the two pivotal characters around which this story revolves. This being the first time I’m experiencing Fun Home live, I’d done some light research before attending this performance, but I wanted everything to be fresh, so I limited my research. I had no idea how shady the character of Bruce Bechdel and it’s a little unnerving to know he’s based on a real person. That being said, Jeffry Denman is spot on in his portrayal of Bruce Bechdel. His authenticity in playing a man who is caught between two worlds is believable and, vocally, Denman is a wonder with a smooth timbre that resonates throughout the theatre. His performance of the emotional and heavy “Edges of the World” brings his character together and gives a better understanding of this person and his inner-conflict. In tandem with Dennam’s portrayal, Andrea Prestinario is an absolute joy to watch. Her portrayal of the present day Alison is so splendid, it’s easy to connect with this character instantly. She is confident and comfortable in this role, which puts the audience at ease, as well. Working as the narrator of this story, Prestinario skillfully walks us through each scene and her slight interactions within the scenes are subtle and she certainly makes this character the heart of the story. Vocally, she is a powerhouse as seen in her performance of  the tense but thoughtful “Telephone Wire.” Prestinario should be applauded for her work and I can’t wait to see more from this able actress.

Final thought…  Fun Home deserved every accolade it received and continues to receive. Not only is the text well though-out and put together, the music is modern and catchy, but heartfelt. The production at Baltimore Center Stage is top notch with exquisite talent and should not be missed this season. There is not one weak link in this chain of performers and everything from Set Design to staging to Music Direction is on point. The story in Fun Home been around for ages and will probably continue on for ages and this particular presentation of a family in crisis, learning about each other, and how to deal with each other has everything – poignancy, humor, sadness, and hope. Get your tickets now, before it’s too late. Come on down to the Fun Home! You won’t regret it!

This is what I thought of Baltimore Center Stage’s Fun Home… What did you think? Please feel free to leave a comment!

Fun Home will play through Feburary 24 at Baltimore Center Stage, 700 North Calvert Street, Baltimore, MD. For tickets, call the box office at 410-332-0033 or you can purchase them online.