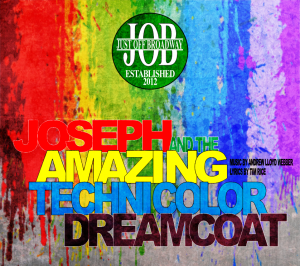 *DISCLAIMER: Please note, one or more persons directly involved in this production are members of the staff of Backstage Baltimore. This individual or persons directly involved with the production did not write or participate in writing this review. The only editing performed on this piece was for grammar, punctuation, and organization. No content editing (adding, changing, or omitting words) were completed without the expressed permission of the author.* 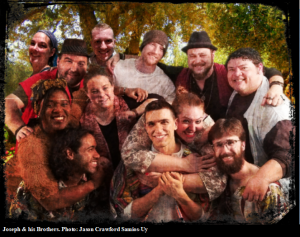 In all my years in theatre I have seen countless theatre companies produce Joseph & the Amazing Technicolor Dreamcoat. I myself have been involved in numerous productions of Joseph and each time I am amazed at the creativity that directors and actors bring to the stage. Each production that I have seen and  been a part of has attempted to spruce up the familiar tunes, scenes, and characters, usually without success. Fortunately for us, Just Off Broadway’s production, Directed by Tammy Oppel, with Music Direction by Patty Delisle and Choreography by Katie Gerstmyer, brought something new that I have never seen before. 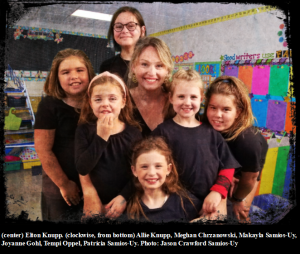 When you attend the show, I encourage you to spot the absolutely hilarious props! See if you can find the cheeseburger beret and the razor scooter. The creative team really came together and provided the Baltimore theatre scene with a great production of Joseph. That being said, no show will ever be perfect– as a professional theatre teacher and director I know this. All we can do is ask that the actors put their everything into a role and hope that it works out. Despite some minor criticism, I would consider this production a success. This is definitely a production that you would not want to miss. 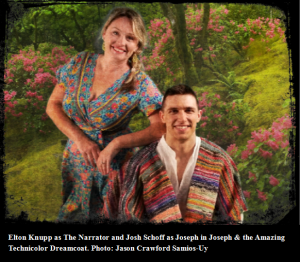 The moment I walked into the theatre, something felt different. I’ve been to several productions at Just Off Broadway and the first thing I noticed was that the pit had been moved. When the overture began, I immediately knew that the creative team had made the right call. Under the direction of Patty Delisle, the orchestra’s first notes brought back so many memories for me of waiting anxiously behind the curtain for an entrance. Andrew Vida is also to be commended for his creative light design. I can say with confidence that I have not met a more professional high school student (and I teach high school). He attends Calvert Hall College High School and hopes to pursue technical theatre once he graduates this coming year. Unfortunately, the issues with the microphones took me out of the performance at times. No theatre company is immune to technical difficulties. I recall a time when the microphones completely stopped working during a production that I was involved with. Due to the microphone issues, it was hard to hear every single line and note. 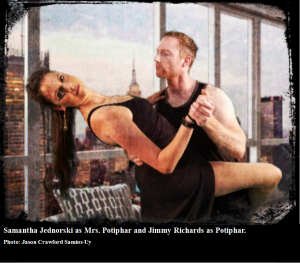 Unless you are familiar with the story of Joseph, it is somewhat hard to follow. The person I came with had never seen Joseph before and was constantly asking me to clarify what was happening on the stage. The chorus was too overpowering when a soloist was taking the lead and the orchestra volume was too intense during certain scenes. One thing that I enjoyed was the ability of the actors to blend their voices together. The harmonies during “Close Every Door” were perfect to the point of giving me goosebumps. I can look past the technical errors to a degree because the entire cast was not only vocally capable, but proved itself able to pull me back into the story with their intoxicating harmonies. While preserving the professionalism and style of the original work, Just Off Broadway has preserved its meaning as well. “Close Every Door”, while Joseph, played by Josh Schoff, is singing the famous lyrics of Tim Rice, “I do not matter. I’m only one person”, words that certainly resonate with anyone who has ever felt alone,  cast members turn their back to him, symbolizing his complete neglect and loneliness. 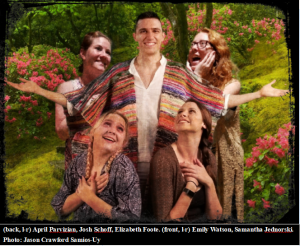 As the cast made their way onto the stage during the overture, it was easy to see which actors were genuinely invested in their role. Most of them were, but a few actors seemed distracted. One great challenge as an actor is to be completely immersed in their character. Jason Crawford Samios-Uy, Chris Thomas,  B. Ever Hanna, and Kate Forton were a few of my favorites throughout the performance. Their facial expressions, crisp clear vocals, ability to harmonize, and overall pizzazz on stage kept me engaged and entertained throughout the performance. I legitimately laughed out loud when Hanna and Forton were performing “One More Angel”, they are truly a dynamic duo. Also worth a “ention is the falsetto voice from Micah Rufsvold, which was used both for comedic relief as well as musical entertainment. 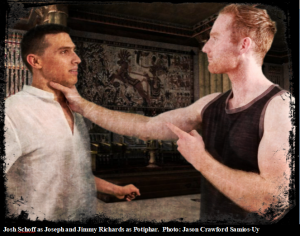 There are lots of reasons to see this show, but the “One More Angel” number really takes the cake. It’s also worth mentioning and the effervescence of Elton Knupp as the Narrator, who skillfully and beautifully keeps the action moving on stage while telling the story with confidence and on point vocal ability.

One thing that confused me at first was the costume choices. There were hardly any costume changes and most actors were in street clothes the entire time. I have never seen that done before. My one criticism is that I would have loved to have seen a few more costume pieces used to help the audience understand when the brothers took on various roles like the Baker and Butler. This was also the first production of Joseph that I have seen where there were no set changes. Props and various benches were moved by the cast seamlessly and allowed the flow from one scene to the next without too much interruption.

Despite the small stage, the choreography was effective, creative, and enjoyable. Katie Gertsmeyer is to be commended for her fantastic skill as a choreographer. Each movement appeared natural for the characters, easy enough for all cast members to perform, and yet still appeared complex. The cast obviously worked extremely hard to pull off some of the choreography. One dancer in particular stands out in my mind. Samantha Jednorski, featured as Mrs. Potiphar, was one of the highlights of the performance. Jednorski has been involved in theatre for years; her expertise in the theatre realm shines through. Her facial expressions, reactions, and vibrant attitude was a true pleasure to witness. Speaking of cast members talent, I was extremely impressed by B’Jion Wright, Naphtali and the Butler, As someone who directs shows at a high school level, the first thought that ran through my mind when I saw her take the stage was, “Wow! This is a perfect example of an actress who has all the essential components to be successful! I wish my students could see her on stage!” Wright has the presence about her; total investment in her character and the skills to make it happen. I was also extremely impressed by Patrick Jay Golden’s performance as Pharaoh. Despite the simple costume, his characterization is what sold me on his solo. I even had the privilege of touching the hand of Ramessess *swoon* when he came into the audience to keep theatre goers on their toes.

I am very much looking forward to the Just Off Broadway’s 2020 Season. Their theme for the upcoming season is #RunningAway. I am very curious to see if they run away with their imagination or if they end up with their heads in the clouds. No matter what, I know the next shows they produce will be a real treat, just like Joseph.

This is what I thought of Just Off Broadway’s production of Joseph & the Amazing Technicolor Dreamcoat… What did you think? Please feel free to leave a comment!

Joseph & the Amazing Technicolor Dreamcoat will play through November 3 at Just Off Broadway at Epiphany Lutheran Church, 4301 Raspe Avenue, Baltimore, MD. Purchase tickets at the door one hour before show time or purchase them online.