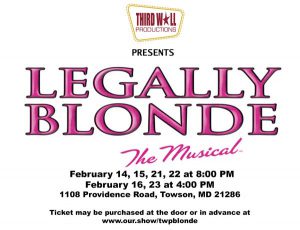 Most of us are taught, at an early age, to not judge a book by it’s cover… I guess now-a-days, it would be don’t judge a site by its homepage? Regardless, what’s on the outside may not tell the entire story of what’s on the inside and in Third Wall Production’s latest offering, Legally Blonde the Musical, with Music & Lyrics by Laurence O’Keefe and Nell Benjamin and Book by Heather Hach, Direction by Henry Cyr, Music Direction by Patty DeLisle, and Choreography by Cecila and Lucy DeBaugh, we are treated to a story of overcoming adversity and redemption all wrapped up with a pink, stylish bow.

For those who may not be in the know… Based on the 2001 film of the same name, starring the perfectly cast Reese Witherspoon, Legally Blonde the Musical follows true California blonde, Elle Woods, who beats the odds and surprises everyone by getting herself a spot at Harvard Law School, for no other reason than to follow the boy who dumped her for being what she was. At Harvard, she surpasses all limited expectations of others and learns she’s more than what people see and think of her.

Scenic Design by Jordan Hollett, Amy Rudai, and Pat Rudai is on point with a unit set in the background at all times and set pieces that are brought on and off to represent various locations. Simple, but effective, Hollett and the Rudais should be commended for their work and efforts. In the same vein, Lighting Design by Jim Shomo is stellar and absolutely fitting for this production. He keeps the already high energy up with his fast moving, varied design and keeps the action engaging. Another great job from Shomo. Anyone who is involved in community or small theatre will most likely tell you that sound is a curse and one of the most difficult aspects of a production to overcome. Unfortunately, if there is a criticism of this production, it is Sound Design by Charles Hirsch. That’s not to say that it is completely Hirsch’s fault as many factors go into how good or bad a sound is, including space, number of people in the venue, volume of the live pit orchestra, etc., etc. I’m glad I know this show well and could follow along, but there are many times, with and without music where sound is a problem, and those who may not be familiar may lose some of the dialogue and story points. That being said, Hirsch does his best and it’s still a strong showing.

Jenifer Hollet’s Costume Design is spot on for this particular production and each character has their own, individual style that fits in with everyone else, our main character stands out, as she should. My only complaint, if it can be called one, is the blonde wig thrown onto the actress playing Elle Woods. This wig, unfortunately, looks like it belongs on a certain HBO show on a woman who deals with dragons, and seemed just a bit out of place on this actress. It worked, but I imagine there may have been better options. Regardless of this one small detail, with great attention to detail and creative styling, Hollet is to be applauded for her efforts and work on this production.

Music Direction by Patty DeLisle and Choreography by Cecilia and Lucy DeBaugh are definite highlights of this production. This is some of the best vocal work and choreography I’ve seen at Third Wall Productions in recent years. DeLisle’s skill is apparent as every group number is in perfect or near perfect harmony and strong voices are brought out in each featured number showing her superb direction. The DeBaugh’s choreography is stellar, high-energy, and upbeat keeping everyone on their toes, literally, at times. They really seem to understand this style of dancing and have created choreography that is well-fitting, fun, and a joy to watch. Major kudos to DeLisle for her Music Direction and the DeBaughs for their creative choreography.

Henry Cyr takes the helm of this production and does an outstanding job. It’s always tough to transfer a popular film to the stage, but Cyr seems to have it all under control. His staging is concise and the pacing is on point, making for an enjoyable telling of this heartfelt story. He knows his way around the stage, has a good grasp on the material, and gives us a great presentation of this popular, modern story.

Moving on to the performance aspect of this production, it’s absolutely worth stating that this entire ensemble is giving 100% effort with high-energy and gusto and are having a blast performing this material. The chemistry within the entire ensemble is apparent and makes the performance all the better. This transfers to the audience and we have just a good a time as they are making for a quite enjoyable evening of theatre.

To name a few, our leading lady, Maggie Mellott as Elle Woods, our bouncy, optimistic, and common sense heroine, is well cast though, at times, she may seem scripted and more subdued than I would like Elle, but she holds her own and gives a solid performance. Vocally, she has the perfect voice for this score and her beautiful performances of featured numbers such as “Positive” and “Legally Blonde” proves she knows this character well. Equally as impressive is Johnny Dunkerly as Emmett Forest, the fellow fish-out-of-water Harvard student who has a big heart and feet planted firmly on the ground. Dunkerly holds his own on stage, giving a strong performance and, vocally, he gives a commendable showing, especially in his featured numbers such as “Chip on My Shoulder” and “Legally Blonde.” Their chemistry is spot on and believable helping their already wonderful performances.

Emily Wesselhoff takes on the physically taxing role of Brooke Wyndham, the high profile client on trial for murder who is a fitness whiz and, let me say… Wesselhoff does not disappoint with her performance in the choreographed jump-rope number, “Whipped Into Shape” and, vocally, she’s a powerhouse giving a strong, confident performance. Also, Christopher Kabara as Professor Callahan, the brilliant, if not sketchy high-priced attorney who doubles as a Harvard professor, seems to have been made for this role. Cabara’s has a strong presence and intensity and makes this role his own. He gives an impressive vocal performance as well, as he shows in his performance of “Blood in the Water.”

Rounding out the featured cast is Lizzy Jackson Fleischmann as Vivienne Kensington, the snobby, uptight current girlfriend of Warner Huntington III and Andy Collins as Warner Huntington III, the well-bred, but douchey guy who thinks he has his future all figured out. Fleischmann embodies this role and presents her as a complete opposite to Elle Woods, as she should and it’s a notable performance. Collins has his role down pat and is nicely cast. He seems to have a good grasp on this character and vocally, he shines, especially in his featured number, the funny, but important “Serious.” Hats off to Fleischmann and Collins for jobs well done.

One of the supporting players, the aforementioned Katelyn Clay, as Margo, is a highlight of this production as her presence is one of the strongest and she seems to glow in every featured piece of dialogue or vocal bit causing the eye to move to her. Her efforts don’t go unnoticed and she’s certainly one to watch in this production. The standout in this, though, is Amy Haynes Rapnicki as Paulette Buonufonte, the unexpected friend to Elle and down-to-earth, positive stylist. Haynes is a pro who knows her way around the stage and knows this character inside and out. She becomes this character and her natural delivery and authenticity shine through. Vocally, this woman has pipes! Her solid performance of her featured number, “Ireland” is stellar and one you won’t easily forget. You really don’t want to miss her performance in this role.

Final thought… This production is high energy and every single member of the ensemble is giving 100% which always makes for a great showing. They’re dedicated to their roles and are having a blast which, in turn, hypes up the audience to make for a great evening of theatre. The performances are solid, the Set Design is effective and aesthetically pleasing, the pacing is on point, and, so far, this production has the best Music Direction and Choreography I’ve seen at Third Wall Productions with phenomenal vocals and dancing, making this a production you won’t want to miss this season. Get your tickets now!

This is what I thought of Third Wall Productions’ production of Legally Blonde the Musical… What did you think? Please feel free to leave a comment!

Legally Blonde the Musical will play through February 23 at Third Wall Productions, St. Thomas’ Episcopal Church, 1108 Providence Road in Towson, MD. For tickets, you can purchase them at the door or online.