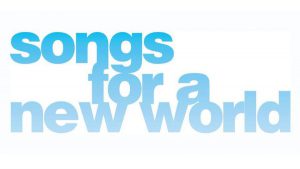 Running Time Aprrox. 1 hour and 20 minutes with one intermission

Showcase on Main is a new venue in Elkton, and Songs for a New World was the inaugural production in their new space. Veteran director S. Lee Lewis takes this opportunity to spotlight the strengths that his new company will be bringing to the community. Although there were a few hiccups in the current production, some due to the issues of moving into a new space and getting started, this was a solid first production that hinted at the possibilities of greatness to come.

Songs for a New World is an interesting piece, in that is a series of songs that are loosely connected around a theme, and there is no clear plot line that connects them to each other. This creates some issues with just the material itself, as it can be hard to connect to characters and moments when they are constantly changing. Additionally, some of the songs simply lend themselves to performance better than others. Some of the numbers really do tell a standalone story and give the performer something to work with or connect to, whereas other songs are unclear or seemingly incomplete in what they are trying to convey. Lewis tried to provide some clarity in the pairing of the songs with multimedia images. In some cases, this did help to provide and drive the narrative in the song; although, in other cases, it just heightened the confusion.

The production was performed more as a staged reading/concert version, as the performers were working with sheet music in front of them on stands. There were times when the performers were able to make the stands disappear with their interpretation of or connection to the piece; however, there were other times in which they were obviously reading the music and made it feel more like watching a rehearsal than a polished performance piece. Additionally, the sound balance seemed underprepared at places, but this was definitely one of the items that was a result of the newness of the space.

Issues aside, the five performers that were bringing these songs to life all demonstrated impressive vocal talents and all had at least one song or moment where they truly connected with one of the songs and really brought a character and story to life. For Tori Healy, that moment was “Surabaya-Santa.” The clever lyrics allowed her to put her comedic timing to work, and she had the audience laughing out loud. Malcolm S. Richardson had several songs that allowed him to show off his impressive range. Richardson also had an infectious smile that was endearing and allowed him to win over the hearts of the audience. He often had the audience bopping along in his upbeat numbers like “King of the World.” Brendan Sheehan definitely struggled the most with making eye contact with the audience, and several good songs/stories were lost with him focused on the music stand. However, when he finally looked up and out and felt what he was singing in “I’d Give It All for You,” it was truly magical. Kristin Sheehan really gets to show her strengths and tell a story best in “I’m Not Afraid of Anything.”

With a lot of strong moments and numbers, though, the one number that really transcends it all is Christy Wyatt singing “Stars and the Moon.” The well-crafted piece really allows her to tell a story that is both humorous and touching and to create a character. Wyatt takes that opportunity in the material and maximizes everything that it has to offer. She brings the story and a distinct character to life in those few minutes.

Overall, the strength of the cast really shows that, once a few bugs are worked out, Showcase on Main will be a place to go and see strong vocals, performances, and storytelling.

This is what I thought of Showcase on Main’s Songs for a New World… What did you think? Please feel free to leave a comment!