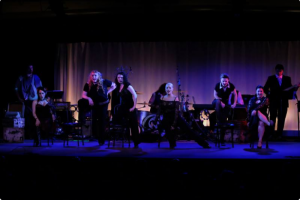 Recently, I had the opportunity to visit a rehearsal and sit down with the cast & crew of The Last Call, an original vaudeville that the Rogue Swan Theatre Company will be presenting at the Havre de Grace Opera House on May 24th & 25th at 8pm. Directed by Katie Gordon and musically directed by Nate Gordon, the presentation is an eclectic mixture of songs and scenes which is woven together through an original script by Katie Gordon and Lilli Burril. This is the group’s second vaudeville and is shaping up to be a unique and exciting evening. 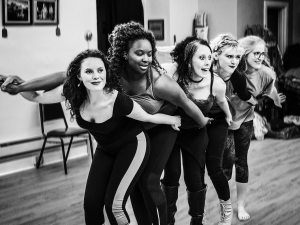 The script is so full of top-secret twists and turns that even I didn’t get the full scoop on all of the surprises. However, everything that I did get to see and hear about left me anxious to see this production. The group creates their own unique harmonies to songs that were impressive, and the snippets of choreography that I was able to preview were original and polished already.

During my time, I was able to talk with Katie Gordon and rest of the cast and crew about their expectations for this production and their hopes for the audience’s experience. Many of the cast and crew, like Katie, are Gordons. Much of the company is some member of her extended family.

Katie Gordon: We are Gordons. We are Hutchinsons. We are Burrils. Everyone else is now in that family as well, whether they wanted to be or not.

BB: What one thing will audiences not want to miss?

“Long-Haired” James Watkins (Rouge Swan President): I am going to have to say the finale.

KG: The finale is going to be pretty cool. It’s two parts, and it is going to rock in every way.

Jesse Gordon (Cast Member): “Don’t Tell Mama” will be hilarious, but we can’t say why. 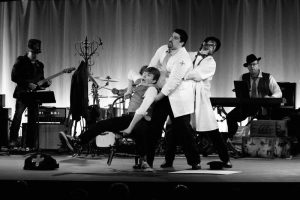 BB: What do you hope that the audience will walk away with?

KG: One thing that was one of the best things said last year: [An audience member said], “The thing that I loved about the show is that, after I had seen about three or four numbers and realized that you had changed every song I knew, I got excited when the next chord played. Thinking: ‘What are they going to do? What are they going to do?’” When we are trying to create that, we ask ourselves, “How are we going to make it roguified?”

Tara Vin (Cast Member): That other forms of theater are still relevant. Just because we are not mainstream, doesn’t mean that we are not good.

Breonna Lewis (Cast Member): Katie takes talents of all different kinds. She finds a way to feature everyone’s specific talents and individualize them but still make it look like a collective, unified unit. 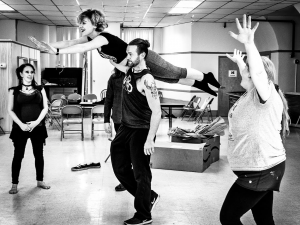 Based on the rehearsal I was able to see and my conversations with the cast, this is a production that I can’t wait to see in its final format.

The Last Call from Rogue Swan Theatre Company will play through May 24 at The Cultural Center at the Opera House, 121 N. Union Street, Havre de Grace, MD. Purchase tickets at the door one hour before show time or purchase them online.