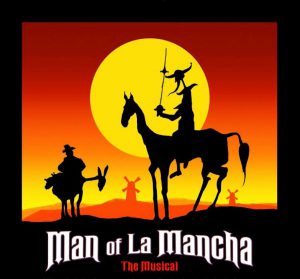 We all need an escape sometimes. Life isn’t fair and can be quite hard to deal with, so, we all have our own little defense mechanisms to help us get through. Sometimes, folks actually get lost in their escape and it’s hard to come back to reality. However, who has it worse? The person lost in his or her escape or the people out here in the real, hard world? In Third Wall Production’s latest offering, Man of La Mancha by Dale Wasserman, with Music by Mitch Leigh and Lyrics by Joe Darion, we are able to take a peek into one man’s madness and/or bliss, whichever you want to all it, as he imagines a world much better than the one he’s actually living in. His dreams aren’t his escape… they’re his reality. This production is Directed by Mike Zellhofer, with Music Direction by William Zellofer, and Choreography by Timoth David Copney-Welton.

In a nutshell, in case you’ve never heard of Man of La Mancha (which might be impossible), it is inspired by Miguel de Cervantes’ 17th century novel, Don Quixote, but only inspired by. Man of La Mancha is a play within a play where Cervantes himself, as well as other prisoners who are awaiting the Spanish Inquisition, perform the story of the “mad” knight, Don Quixote, who is actually an old, dying man refusing to let go of his ideals and passions. 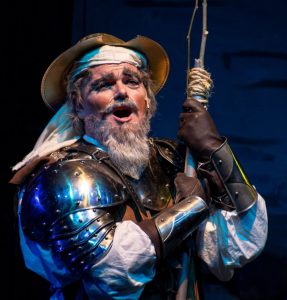 The Scenic Design by Jordan Hollett and Pat & Amy Rudai is impeccable. The creativity and attention to detail is wonderful and, though it’s a unit set, allows itself to fit into every scene with the addition of small set pieces. It’s practical yet pleasing on the eye, making for a great combination. The motorized door/ramp is quite impressive and adds value to the production as a whole. Kudos to this team for their innovative and charming design.

Lighting and Sound Design go hand in hand and Jim Shomo (Lighing Design) and Charles Hirsch (Sound Design) hit the nail on the head with this production. Both Shomo and Hirsch are masters of their crafts and both Lighting and Sound Design helped move this production along subtly, without hindering or taking attention away from the action. Shomo has a distinct knack for mood lighting and setting the mood for each scene beautifully, while Hirsch adds just the correct amount of effects without overloading and keeps the balance just right. Both Shomo and Hirsch are to be commended for their efforts.

Maggie Flanigan takes on Costume Design and it is on point. Flanigan has a great comprehension of this piece and wardrobes the ensemble to the nines. Each character whether ensemble or featured is appropriately and splendidly dressed, adding to the authenticity and fanciful nature of the show. She’s done her research and has created a wonderful design that is to be applauded.

Timoth David Copney-Welton, a Baltimore theatre fixture, takes on Chorographer duties in this production and he knows his ensemble and helps them shine. Though not heavy choreography, it is entertaining and helps tell this classic story. Innovative and creative, the choreography is a joy to watch and every single ensemble member seems to be having a blast performing it. Along the same lines, Music Direction by William Zellhofer is top notch. With such familiar music and songs, Zellhofer has this cast in tight harmonies and the featured performers are well-rehearsed and spot on. Copney-Welton and Zellhofer both give great showings in their admirable work on this production.

Mike Zellhofer takes the helm of this production and it’s clear he has a tight grasp on the material. His staging of this piece is engaging and keeps the audience interested. The transitions are smooth and simple keeping the pace balanced. The characters come to life and his vision is apparent in every move and scene. It’s always challenging to take on Direction of such a popular, classic piece, but Zellhofer faces it head on and creates an enjoyable, clean, and polished piece that makes for a delightful evening of theatre. 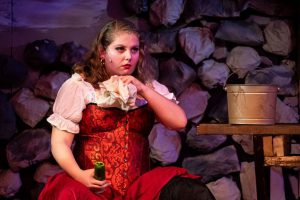 Moving on to the performance aspect of this production, it’s worth noting that every ensemble member, whether featured or not, is giving the utmost effort in their roles. They all work quite well together and each has a hand in helping move the story along nicely.

To name a few, Timoth David Copney-Welton as Padre and Annmarie Pallanck as Sancho both have a great understanding of their characters and their objectives. They are charming as a quirky priest and a fiercely loyal servant. Copney-Welton plays Padre with just enough sincerity to make the role funny and he seems to embody this character. His rendition of “To Each His Dulcinea” rings throughout the theatre and is a joy to experience. Pallanck is, at times, a little stiff and scripted, but still oozes the charm and giddiness of the character that makes her likeable from the get. Her performance of “I Really Like Him” is both funny and sincere at the same time making for a beautiful moment. Both give strong, admirable performances in this production.

A highlight of this production is Jessica Preactor, who takes on the role of Aldonza/Dulcinea, the young woman to whom Don Quixote takes a shine, and she hits the ground running. Vocally, she’s a powerhouse with a strong, clear voice that resonates and her performances of her featured numbers such as “It’s All the Same,” “What Does He Want of Me,” and “Aldonza” are picture perfect, just as her character work is, really getting to the nitty-gritty of the character and presenting her beautifully.

The standout in this piece is definitely Lance Bankerd, who tackles the role of Miguel de Cervantes/Don Quixote. Bankerd’s character work is second to none. He becomes this character in both manner and look with ease. Watching him, he seems to actually transform from Lance Bankerd into Don Quixote and it’s awesome to watch. One thing I really admire about Bankerd is his ability to act out a song. His vocals are marvelous, indeed, but he’s not worried about a perfect vocal performance and that’s what makes a good actor great. His renditions of the standard “The Impossible Dream” is outstanding, strong, and heartfelt. This performance is almost worth the price of admission! He knows what he’s singing about and exudes it with every word and note, same with his other featured numbers, including the lovelorn “Dulcinea.” Major kudos to Bankerd for his fine work in this production.

This is what I thought of Third Wall Productions’ production of Man of La Mancha… What did you think? Please feel free to leave a comment!

Man of La Mancha will play through November 17 at Third Wall Productions, St. Thomas’ Episcopal Church, 1108 Providence Road in Towson, MD. For tickets, you can purchase them at the door or online.