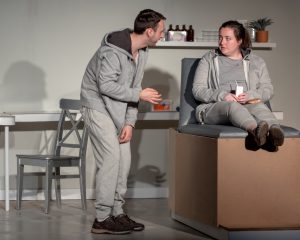 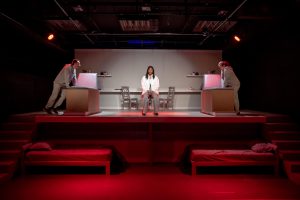 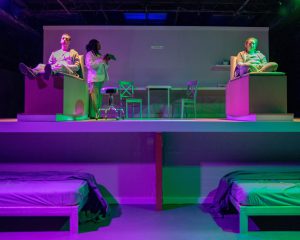 Running Time: 2 hours and 15 minutes with one intermission
Having never experienced a short-play event before, I had my reservations. I was hoping I wouldn’t have to sit through short play after short play of pretentious writing, actors too damned serious for their own good, and an evening of writers trying to push the envelope and shock so much that it’s no longer entertaining. HOWEVER, that’s not at all what I experienced at Fells Point Corner Theatre’s latest presentation, their annual 10x10x10, a series of original 10-minute plays by Baltimore authors, in their intimate upstairs Skokal Theatre.

This year, the audience gets to experience an outstanding line up of plays. All of the pieces are strong and send good messages in creative and unique ways. We start off the evening with Hologram by Utkarsh Rajawat which is a session with… you guessed it, a hologram (impressively performed by Betse Lyons) full of fun facts and trivia you might find important to your life but even holograms have feelings, right? Then we get into the funny Kings of the World by Kate Danley that speaks to the idea of change and gives us a peek into a local, seemingly rural bar in a dusty Southern or Midwestern town where two regulars venture into new territory but possibly realize sometimes the traditional is a good, safe thing. The next short consists of the largest cast of the evening, The Second Episode of Dyke Tracy by Dian “MJ” Perrin, and is a fun take on the old fashioned detective stories which impressively has a complete arc in 10 minutes! The actors are dedicated to their roles and the humor shines through in this one. Then the Act I ends with Meridian Trench by Rufus Drawlings which is a confusing, frantic tale of a homeless, dirt-eating woman who is taken in by a dubious gentleman in the park. The material in this last piece of Act I seems a bit pretentious and all over the place, but with that said, the performances from the actors, Crystal Sewell and Francis Cabatac, is superb.

Act II begins with the supernatural Dog Years by Peter Davis which is well-wrtten and performed and tells a story of a lost soul and a stranger who wants to make an interesting deal. Then keeping with the supernatural feel, Closing the Door by Nicholas Morrison is a contemporary and fresh look at the Greek Gods and Goddesses and how they handle humans and death. It’s a clever and entertaining piece with a good balance of humor and drama. Next up is Addict Named Hal by Alice Stanley, performed by David Shoemaker. It’s a cautionary tale that peeks into the life of a once recovering addict and the decisions he’s made while he tells us his story as if we are in a Narcotics Anonymous meeting. This piece has a very natural performance from Shoemaker who embodies this character entirely. Nearing the end of the evening we experience Making Time by Mark Scharf which is absolutely one of the standouts in these plays. It’s a touching story of two strangers at a bus stop who make a human connection and realize our journeys may be different, but we’re all heading to the same final destination. This is a powerful piece and is exquisitely performed by Helenmary Ball and Steve Barroga making for a moving and entertaining 10 minutes. Ending the evening is Rising, Rising by Rich Espey which is a quirky tale of transformation and change. Not really my cup of tea, it seems a little absurd at times but that’s probably what Espey is going for. With that said, it’s an interesting commentary on change and the resistance of change to finally giving in and accepting. Mia Robinson and Thom Sinn are dedicated and give strong, confident performances in this piece.

Overall, the entire ensemble is strong. They are confident and grasp the pieces they are performing and each give an impressive performances in multiple and vastly different pieces and characters. Kudos to the entire ensemble of this year’s 10x10x10.
The Directors, ustin Lawson Isett, Christen Cromwell, Ben Kleymeyer, Peter Davis, and Alice Stanley do stellar jobs with these pieces as they seem to understand each piece and character and tell the stories clearly and concisely with a steady and even tempo.
Also worth mentioning is the technical side of this production. Light Design and Sound Design by Charles Danforth III and Andrew Porter, respectively, help set the mood for each of the plays and adds value each and, I’ve got to say, the running crew for this production (many of whom were cast members, as well) is on point! The changes between each piece took only seconds, moving the evening along nicely and keeping a good pace.
Final thought… 10x10x10 at Fells Point Corner Theatre is a very well put-together production of 10 plays that can stand on their own and have been well thought out and well written. Some are stronger than others, but it’s a matter of taste, really. Fells Point Corner Theatre has managed to group together 10 short plays that work well together and share the same theme (matching Fells Point Corner Theatre’s them of 2017 – #RescueMe). The plays run the gambit of feels from witty humor to poignant drama. It’s a great showcase of local Baltimore talent both on stage and on the page. It’s also good to just support local theatre, so, get your tickets while they last because this is definitely an event you want to experience this season.
Line up of Plays:
Hologram by Utkarsh Rajawat
Kings of the World by Kate Danley
The Second Episode of Dyke Tracy by Dian “MJ” Perrin
Meridian Trench by Ben Kleymeyer
Dog Years by Peter Davis
Closing the Door by Nicholas Morrison
Addict Named Hal by Alice Stanley
Making Time by Mark Scharf
Rising, Rising by Rich Espey
This is what I thought of Fells Point Corner Theatre’s production of 10x10x10… What did you think? Please feel free to leave a comment!
10x10x10 will play through April 16 at Fells Point Corner Theatre, 251 S Ann Street, Baltimore, MD. For more information log on to fpct.org, or purchase tickets online.
Email us at backstagebaltimore@gmail.com
Like Backstage Baltimore on Facebook
Follow Backstage Baltimore on Twitter (@backstagebmore) and Instagram (backstagebaltimore)