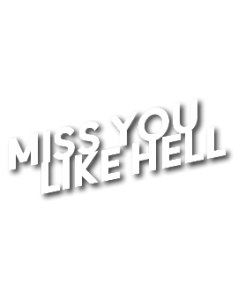 Approx. Running Time: 1 hour and 40 minutes with no intermission

In today’s political climate, immigration is a hot topic and there are two sides to the story whether we like one side or the other, they’re there. We get a look at one side of immigration and family in Baltimore Center Stage‘s latest offering, Miss You Like Hell with Book and Lyrics by Quiara Alegria Hudes & Music and Lyrics by Erin McKeown, with Direction by Rebecca Martinez, Music Direction by Tiffany Underwood-Holmes, and Choreography by Alex Perez. Sometimes we must be open minded and ask questions rather than make knee jerk reactions and assumptions.

Briefly, Miss You Like Hell concerns itself with Olivia, a smart, acidic teenager who agrees to drive across the country with her Latina mother, Beatriz. The two have been separated for several years and neither are sure where this trip will take them. They meet all sorts of characters along the way and seem to be slipping further away from each other, or closer together. It’s main story is about a complex mother-daughter relationship that is challenged by current immigration policy – one that may or may not send Beatriz back to her home country. 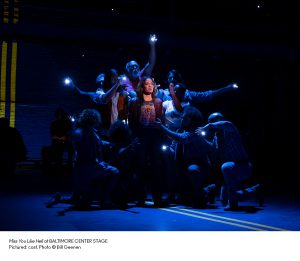 The Book by Quiara Alegria Hudes flows nicely and keeps the chronology of a few days with natural, unforced dialogue. The smooth timeline makes it easy to follow and the dialogue keeps the action engaging. Music by Erin McKeown is appealing and contemporary with good hooks that will have you humming as you leave the theater. Great arrangements and an apt ensemble enhances an already great score.  Lyrics by both Hudes and McKeown are good, in general, but are a bit too on the nose for my liking at times. Some of the lyrics could have been regular dialogue, but we would have missed out on the beautiful music McKeown has created, so, it’s a compromise, in a way. Overall, the entire piece, Book, Music, and Lyrics is constructed splendidly and is an important, polished, work that makes the audience think, and that can never be a bad thing in theatre.

Reid Thompson’s Set Design fits perfectly with this material. Simple and minimal, but effective use of space and ease of transition make this design successful and adds great value to the production, as a whole. Scaffolding and movable set pieces make up this set but still transport the audience to each location easily and seamlessly, not hindering any of the action, but working in tandem with it. Kudos to Thompson for a well-designed, modern set. 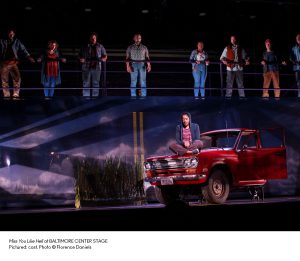 Choreography by Alex Perez is frenetic, but once you get used to the style, it begins to make more sense. This piece doesn’t strike me as a piece that needs heavy choreography, but Perez seems to be trying to make the best of it, to a fault. Simply put, there’s just too much going on at one time in certain parts of this production and the ensemble, doesn’t seem 100% comfortable with the choreography choices, but… as it goes in theatre, not everyone is a dancer. However, this isn’t to say Perez’s work was bad, because it wasn’t, maybe just misplaced. I’m wondering what a less choreographed production would look like – not void of choreography (it’s a musical for God’s sake), but maybe minimal choreography might be more beneficial. 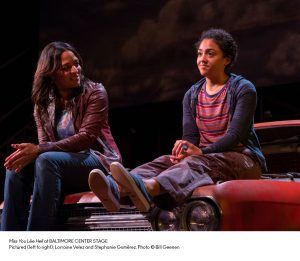 Music Direction by Tiffany Underwood-Holmes is impeccable. Working with an already wonderful score, Underwood-Holmes has presented this material beautifully. She has a tight grasp on the modern style of this piece and has guided her musicians and ensemble confidently into superb performances and presentations of this score. The orchestra should be applauded as well, for their efforts in bringing this story to life through the music. The orchestra is consisted of: Daphne Benichou (Viola); Zack Branch (Basses); Frank Carrol (Drums/Percussion); Soojin Chang (Violin); Mary Ann Perkel (Cello); Diego Retana (Guitars); and Tiffany Underwood-Holmes (Conductor/Keyboards). Hats off to Underwood-Holmes for a job quite well done.

Taking the reins of this production is Rebecca Martinez and her Direction of this piece is outstanding. The staging is well-thought out and polished, making for a solid presentation. She has a deep comprehension of the material and understands its importance in current thought and actions, and each scene is handled exquisitely. The character work is just as splendid and Martinez’s presentation is easy to follow, thought-provoking, and refined.

Moving on to the performance aspect of this piece, it’s worth noting that the entire ensemble working together makes this and magnificent production. Each, in his or her own way, help tell this story and each are needed. This is truly an ensemble piece and in the end, all have given 100% effort and taken their part in making this a superb production. 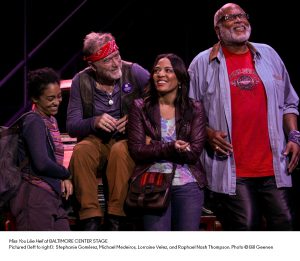 To name a few, Michael Mediros as Mo, a gay veteran, and Raphael Nash Thompson as Higgins, his long-time lover and companion are a sort of comedic relief, and boy, do they know their roles. Both actors have a tight grasp on their characters and the humor that is required of them. Mediros’ portrayal of Mo, a gruff Vietnam veteran with a heart of gold, is authentic and charming making him likable from the start. In the same vein, Thompson’s portrayal of Higgins, an equally gruff, old-timer with a big heart, is also believable and his stage presence is strong. Both are confident in their roles and their chemistry makes the experience all the more authentic and both Mediros and Thompson are to be applauded for their work.

Taking on the supporting, but important role of Pearl is Jaela Cheeks-Lomax and she is certainly a highlight of this production. Portraying an awkward, but confident and true-to-herself teen, Cheeks-Lomax embodies this character and makes it her own. Vocally, she’s a powerhouse and her rendition of her featured number, “Yellowstone,” a soulful, slow-jam style song is phenomenal. She’s got a strong voice that resonates throughout the theater and makes one stand up and take notice. 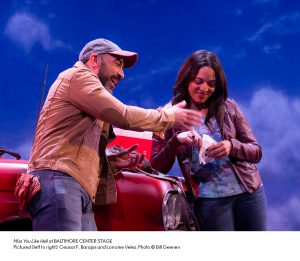 Ceasar F. Barajas takes on the charming role of Manuel, a gentlemen that Olivia and Beatriz happen to encounter on their journey who happens to sell tamales out of a cooler. Barajas makes this character absolutely likable and you feel for him instantly. He portrays the role with a delicacy and gentleness that pulls the audience in. He knows his character and the things he’s gone through and emotes that with every gesture and word. His vocal stylings are impressive, as well, especially his stylings of featured numbers, the reminiscing “Tamales” and the New Orlean’s inspired “The Dirtiest Dead.”

Stephanie Gomerez takes on the complex role of Olivia, the angsty teenager who hasn’t seen her mother in years but is thrown into cross-country road trip with her. Gomerez, too, is a highlight in this role. She seems to have a great understanding of this role and of an angsty teen. Her portrayal of this character is extraordinary and she becomes this character. Her mannerisms, gestures, and overall take on Olivia is thought out and polished and she is a joy to watch. Her vocal performance is stellar in this production with a beautiful, strong range, and her performances of her featured numbers like, “Sundays” and the titular and poignant “Miss You Like Hell” will give you all the feels. 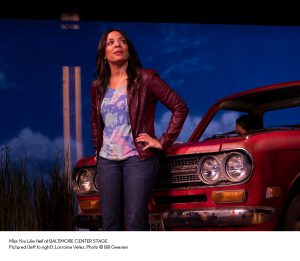 Lastly (but not least), Lorraine Velez takes on the role of Beatriz, the loving, if not flawed mother of Olivia, who is trying to do the best she can with her circumstances and she is the standout in this production.. At first glance, you might think you recognize Lorraine Velez… I most certainly did. Being a huge fan of the television show Dexter, my eyebrow definitely raised my eyebrow, but… after a closer look at the program, I realized I wasn’t looking at the actress who played one of my favorite characters on one of my favorite television shows, but… I was looking at her twin sister and, I’ve got to say, I’m just as enthralled with Lorainne Velez as I was with her sister a few years back. Velez can certainly carry her own and she plays this role divinely and skillfully. From the moment she walks onto the stage, she becomes this woman and doesn’t falter once. She’s confident and comfortable in this role and has no hesitation in any part of her performance. Her delivery of the dialogue is natural and authentic and every move she makes just makes this character more believable. When it comes to vocals, Velez does not disappoint. Her performances of her featured numbers such as the opening “(Prayer) Lioness” is inspiring, “Over My Shoulder,” is thoughtful, and the fun, energetic “Dance With Me” will have you toe tapping at your seat. Beatriz is a tough character in the way that you don’t know if you like her or dislike her, but you seem to be rooting for her and Velez has this understanding and portrays her near perfectly.

Final thought…  Miss You Like Hell is a relevant, poignant, thoughtful story that fits right into current events of the country and it really gets you thinking. It doesn’t throw politics in your face, which I really liked, but it opens your mind to the human aspect of deportation and family dynamics. The script is well written and thought out with natural dialogue and the music is contemporary with tunes that have good hooks, even when the lyrics are a bit too on the nose. The production value is top notch and the performances are on point so, if you are still deciding on whether or not to see this production. Do it. Get your tickets now.

This is what I thought of Baltimore Center Stage’s Miss You Like Hell… What did you think? Please feel free to leave a comment!

Miss You Like Hell will play through October 13 at Baltimore Center Stage, 700 North Calvert Street, Baltimore, MD. For tickets, call the box office at 410-332-0033 or you can purchase them online.