Running Time: 2 hours and 30 minutes with one intermission

Having been born and raised in Baltimore as well as having had the opportunity to do some traveling, I’ve heard “You can take the boy out of Baltimore, but you can’t take Baltimore out of the boy,” and I couldn’t agree more. Is it possible to transform someone by just changing the outside? My Fair Lady, with Book and Lyrics by Alan Jay Lerner and Music by Frederick Lowe, Directed by Thomas Rendulic and Music Direction by Daniel Plante, concerns itself with this very sentiment and through memorable, now standard tunes, tries to answer the question.

The cast of My Fair Lady at Third Wall Productions. Credit: Amy Rudai

Based on George Bernard Shaw’s play Pygmalion, My Fair Lady tells the story of Miss Eliza Doolittle, a flower girl in the East End of London who grew up poor and stayed there. By a chance encounter, Henry Higgins, a professor of phonetics, is intrigued by her heavy cockney accent. He bets his new friend, Colonel Pickering, a linguist himself, that he could turn a lowly, cockney flower girl into a lady, or at least pass her off as one, through improving her speech and appearance. Through the process, Eliza comes into her own and realizes she has what she needs to rise above her station and, by a strange twist of fate, might be able to find love as well.

Pat Rudai’s and Jordan Hollett’s Set Design is fitting, if not a bit too much for this space. The attention to detail is on point and transport the audience into the scene nicely, but its flaw is that it does make for some clunky scene changes that could be fixed with a simpler design that would make a different, but equivalent impact. This design is perfect for a static set, but since there are a number of scene changes, it causes some problems. This isn’t to say it doesn’t look good, because it most decidedly does, but because of the amount of set, it hindered the pacing and flow of the piece.

Lighting Design by Jim Shomo and Sound Design by Charles Hirsch are simple but effective in setting the mood for each scene. Shomo doesn’t give us flashy light shows but wisely keeps it subtle with small shifts of lights and levels and seamless transitions.

The cast of My Fair Lady at Third Wall Productions. Credit: Amy Rudai

Amy Rudai’s Costume Design is impeccable. This is a classic piece, as mentioned, and these older shows require a lot of specific costuming and Rudai has shown she is up to the task. The contrast between the upper crust and the lower class is clear and Eliza Doolittle’s transition from low class to upper crust is beautifully presented. Each character’s costume is individualized and the ensemble is comfortable and seems at ease which makes for a very good design. Kudos to Amy Rudai for a job well done.

Daniel Plante is to be applauded for his Music Direction of this production. Though some of the featured numbers could have been presented better, Plante can’t be blamed for the performance of a song. The score, however, needs to be snipped up a bit. These older shows tend to run long, which is fine, but with today’s general audience, it be a bit daunting, do-able, but daunting. As Music Director, he has a say in what is to be cut, if anything, and what is to be kept in place. The scene change music went way too long (thought they needed it because of the tedious set changes, so, they get a pass for this… kind of) and the overture and entr’acte could have been trimmed down to save a few minutes, at least. Overall, the harmonies are very tight and the ensemble is very well-rehearsed and are absolute joy to hear.

Thomas Rendulic takes the reigns of this production and though, overall, it is a polished, nicely-presented production, it does have its weaknesses. It seems Rendulic has a good comprehension of this piece and his staging is very good with very little fault (such as a lot of what I call “Stand and Bark” where an actor performs a song front and center with little to no movement or direction), but the character development doesn’t seem completely apparent. For instance, Alfred P. Doolittle is arguably the funniest character in this piece but, unfortunately, most of his character and comedic parts are lost. The comedy, overall, does seem to be lacking in this piece and this is because it’s either lost on Rendulic or the actors were not given enough explanation and/or direction. Some very humorous sections of this piece were skimmed over or not emphasized enough, for my liking, and it had to do with timing which is of the utmost importance when dealing with comedy. However, directing a well-known, older piece such as My Fair Lady is quite a responsibility and no small feat and Rendulic has definitely stood up to the task. Breathing new life into a familiar piece is quite difficult, I realize that, but it certainly can be done. This particular production is a bit stale being presented as-is and traditional, instead of a new and fresh presentation. Of course, the familiar and traditional sits well with lots of theatre goers so, if that’s what Rendulic is going for, kudos!

Moving on to the performance aspect of this piece I’d like to mention that the entire Ensemble gives 100% effort and is energized. As mentioned before, the harmonies are tight and all give confident, strong performances, especially the Male Quartet consisting of Michael Mullis, James Rittner, Frederick Frey, and B Ever Hanna.

To mention a few, I’ll begin with Forest Deal, who takes on the role of Alfred Doolittle. Deal looks great in the part but, though his performance is consistent, it doesn’t quite hit the mark. The aforementioned comedy just falls flat and this character is usually a riot. This is a fast-talking, high energy character, but Deal’s portrayal doesn’t quite match. Again, he’s consistent and gets his lines out but there doesn’t seem to be any “oomph” behind them. Vocally, he can carry the tune nicely, as in “A Little Bit of Luck,” but, again, that energy and urgency isn’t there. That’s not to say he does a horrible job, though. He seems to have a good grasp on the character and is comfortable on stage and he does make the character endearing and likeable.

A couple of other supporting but very important characters in this piece are Colonel Pickering, played by Patrick Martyn and Freddy Eynsford-Hill, portrayed by Kevin James Logan. Martyn, as Colonel Pickering is well cast and understands his character quite well and portrays him as the kind, gentle man he is while holding his own, vocally, as in featured number such as “You Did It” and “A Hymn to Him.” Logan, is perfectly cast in his role as Freddy. He works well with his cast mates and has a good comprehension of his character’s “uptown” life. Though when he’s singing, it seems he can’t make a complete connection with the audience as if he’s concentrating to hard, but his vocals are top-notch. In his featured number, the now-standard “On the Street Where You Live,” his smooth voice soars throughout the theatre making one stand up and take notice. Overall, both Martyn and Logan are strong and confident performers making for delightful performances.

Jason Eisner takes on the hefty role of the serious, straight-forward Henry Higgins, professor of phonetics and he gives a very decent portrayal. This character is ridged, but quirky and is a loveable character you love to hate, if that makes any sense. He gets on your nerves, but he is endearing and this is not an easy character to take on as an actor. Eisner does so for the most part, but the pretentiousness is lacking in this performance. His understanding of Henry Higgins is clear but at times he seems a bit scripted and forced. Vocally, he gives an admirable showing as in such featured numbers as “Why Can’t the English Speak English,” and “I’ve Grown Accustomed to Her Face,” and his chemistry with his cast mates is quite good, especially with Jessica Preactor (Eliza Doolittle), and the scenes with her are superb. Overall, Eisner is to be commended for his portrayal of this well-known character.

This brings us to the stand out in this production who is, Jessica Preactor as Eliza Doolittle. Preactor seemed to have been born for this role. She definitely carries the entire show and her performance is near as flawless as one can get. She embodies this character of Eliza Doolittle and every movement and delivery of dialogue is done with authenticity and purpose. She’s a strong stage presence and vocally, she is a powerhouse. It seems effortless on her part as she sings through such well-known numbers as “Wouldn’t It Be Loverly,” “I Could Have Danced All Night,” and “Just You Wait.” She knows her character and portrays her with just the right amount of poignancy and spitfire as required. This actress is one to watch out for and I’m looking forward to seeing her work in the future.

Final thought…  If you ask anyone who knows me or my tastes in musical theatre, they’ll confirm that I most certainly love the classics. Give me a good, old-fashioned song-and-dance any day of the week and I’ll be pleased as punch. Of course, I enjoy the modern pieces, as well, but sometimes, I just want to be entertained. My Fair Lady at Third Wall Productions is not without its flaws but is a well put-together production. Most of the voices are spectacular (with a lot of them featured in the ensemble) and the traditional setting might be unexciting, but it is on point. It’s a lengthy show, but, dare I say it, with a few cuts to the score, it could take the run time down, but the orchestra is very good so that almost makes up for the immense amount of music that you find in this classic piece. There are some questionable casting choices and transition issues but, overall, the production comes together nicely, and Third Wall Productions gives a good showing in presenting this familiar, classic piece that’s worth checking out.

This is what I thought of Third Wall Productions’ production of My Fair Lady… What did you think? Please feel free to leave a comment!

My Fair Lady will play through November 18 at Third Wall Productions, St. Thomas Episcopal Church, 1108 Providence Road, Baltimore, MD 21286. For tickets, purchase them at the door or purchase them online. 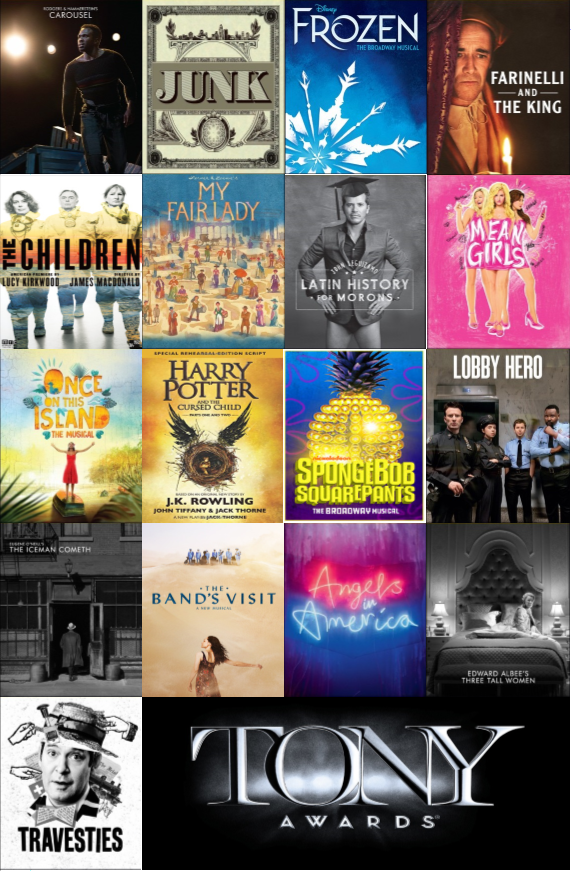 Well, folks, it’s that time of year again and the theatre world is buzzing about with predictions, satisfaction, and outrage (of course) about the Tony Award nominations announced yesterday by the lovely duo of Katherine McPhee and Leslie Odem, Jr.

For musicals, Mean Girls and SpongeBob SquarePants: The Musical lead the running with 12 nominations each while, for plays, Angels in America leads with 11 nominations but Harry Potter and the Cursed Child, Parts One and Two follow closely behind with 10 nominations under their belt! So, without further ado, let’s recap the nominees!

Best Performance by an Actor in a Leading Role in a Play
Andrew Garfield, Angels in America
Tom Hollander, Travesties
Jamie Parker, Harry Potter and the Cursed Child, Parts One and Two
Mark Rylance, Farinelli and the King
Denzel Washington, Eugene O’Neill’s The Iceman Cometh

Best Play
The Children
Farinelli and the King
Harry Potter and the Cursed Child, Parts One and Two
Junk
Latin History for Morons

So… what are your predictions? Go on our Facebook page to take polls and post your opinions!

The 72nd Annual Tony Awards will be hosted by Sara Bareilles and Josh Groben on Sunday, June 10 at Radio City Music Hall. The live broadcast will air on your local CBS channel from 8:00pm-11:00pm (EST).