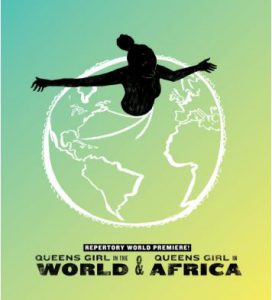 Running Time: Both productions approx. 2 hours with one intermission

I sometimes think I was born in the wrong era. The early 1960s fascinates me, from politics, to styles, to music… all of it! I grew up with a very nostalgic mother, so, I’m actually quite familiar with all of it and I love it! Shows like Everyman Theatre’s latest offering, Queens Girl in the World and Queens Girl in Africa, in repertory, by Caleen Sinnette Jennings, Directed by Paige Hernandez, always takes me back, even though I didn’t live it, but know enough about it to relate. Whether you experienced the era first hand or just learned about it from your elders, these shows will transport you right back to a time when things seemed simpler, but a mess of things was bubbling just under the surface. 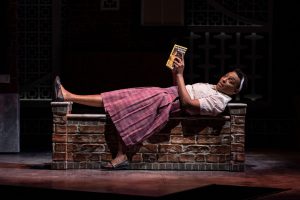 Queens Girl in the World and Queens Girl in Africa is a multi-chapter memoir, of sorts, from Caleen Sinnette Jennings and both concern themselves with young Jacqueline Marie Butler, from Queens, New York, as she tells her story from her childhood to young adulthood. Through impressions of the people in her life, we watch her come of age both in America and Africa as she emotes the humor and poignancy of being a Queens girl in the world and in Africa.

Overall, both of these pieces are very, very well written and thought-out. It’s a refreshing, one woman piece that gives a glimpse into a the life of a young African-American girl who grew up in a practically all-white social circle, and her balancing between whites and blacks in the early 1960s. It’s original, engaging, and authentic with superb performances and staging. 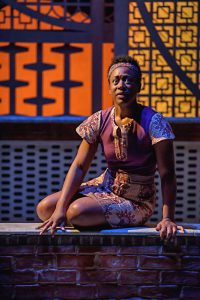 Paige Hathway’s Set Design is minimal, but absolutely gorgeous. With a simple stoop and front door for Queens Girl in the World and practically blank stage with a simple chair, for the most part, for Queens Girl in Africa, it forces the audience to fill in the blanks, but that’s what makes this production so engaging. Hathaway has managed to transport us to early 60s Queens, New York and Nigeria with a simple design and she is to be applauded and commended for her efforts.

Lighting Design by Nancy Schertler and Sound Design by David Lamont Wilson is subtle but effective. Schertler’s design sets the mood for each “scene” seamlessly and follows the action as Jaqueline changes topics and explains her days and nights. Wilson’s Sound Design works in tandem with the production with well-chosen effects and music of the time. Though minimal, both of these designs do their jobs in moving the action forward and not hindering it and taking focus away, making for excellent Lighting and Sound Design. 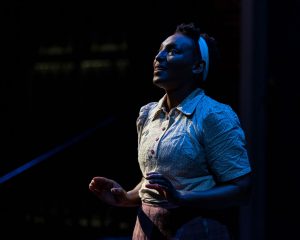 Paige Hernandez, a resident company member, takes the reigns of this production and it’s clear she has a great comprehension of this material. Staging a one-person show can actually be challenging, but Hernandez has knocked it out of the park with this production. Her vision is clear and her character work is apparent working with these actresses to create this character from childhood into adulthood. She keeps the character engaging (with the help of the actresses, of course), and the seamless transition between actresses is impeccable and impressive. What I like is that she keeps it simple and lets the actresses do their thing without a bunch of bells and whistles. This brings the raw talent out of the actress and makes for a stellar production. Hats off and kudos to Hernandez for a job quite well done.

Dawn Ursula takes on the role of Jacqueline Marie Butler in Queens Girl in the World and she has this character down pat. She’s comfortable playing the childhood to teen Jaqueline and manages the impressions of all the other characters with ease. A large part of this piece is the impressions this character does when discussing the people in her life and Ursula does this seamlessly. She understands this character (and the ages she’s portraying), and makes this role her own. Overall, she gives a strong, confident, and commendable performance.

Tackling the role of Jacqueline in Queens Girl in Africa is the apt and able Ericka Rose and she is phenomenal in her portrayal. The first thing I noticed and loved about this actress is her smooth but resonating stage voice. I was engaged the moment she started speaking and stayed engaged through to the end. She, too, effortlessly performed the impressions of others in Jacqueline’s life with ease, embodying all of the characters discussed in this piece. She tackles Jacqueline’s later years and matches Ursula’s portrayal near perfectly, while adding her own twist and making the role hers, which is no small feat. She holds the entire piece on her shoulders and doesn’t falter once giving a strong and praiseworthy performance.

Both of these actresses, Dawn Ursula and Erika Rose, emote both the humor and poignancy this character and material calls for and it’s easy they can feel this character deeply, making for extraordinary performances from both.

Final thought…  Queens Girl in the World & Queens Girl in Africa at Everyman Theatre is a coming of age story that is original and immersive using nostalgia, pathos, humor, and everything in between to tell a simple story of a girl growing up. Real life may be boring, but when it’s put into a script and performed well, as both of these productions provide, it can be a wondrous experience and that’s what these shows are. Ursula and Rose perform this character well and it’s easy to see their understanding of this character and how they can relate to her, making it easy for an audience to relate. I’m looking forward to seeing the next installment next season, but until then, you don’t want to miss these productions running in repertory. Get your tickets now.

This is what I thought of Everyman Theatre’s Queens Girl in the World & Queens Girl in Africa… What did you think? Please feel free to leave a comment!

Queens Girl in the World & Queens Girl in Africa will play in repertory through June 23 at Everyman Theatre, 315 W Fayette Street, Baltimore, MD. For tickets, call the box office at 410-752-2208 or you can purchase them online.