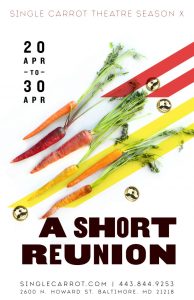 Running Time: 2 hours and 30 minutes with no intermission
Baltimore is full of quirkiness… there’s no way around it. However, it’s also filled with a certain charm that earns it the Charm City nickname. Adding to all this quirkiness and charm, independent theatres have been popping up all over the place and trying new things, stepping out of the traditional theatre experience and contributing to the overall personality of the city. Some have been around for a few years, ten to be exact, and Single Carrot Theatre’s latest offering, A Short Reunion, Directed by various Single Carrot folks, of past and present, and Written by various authors is a new, creative presentation of short plays that takes the audience on a little field trip through Remington, a little corner of Baltimore, and proudly puts the city’s quirkiness and charm on display for an evening of blending the older (original) Single Carrot Theatre with the new.
The evening started out by congregating outside of Single Carrot theatre and breaking up into groups with tour guides and I had the pleasure of being in cute-as-a-button Brian Gilbert’s group and after a few brief comments giving us the ground rules of the “tour”, we were off… all the way over to Parts & Labor Restaurant, which was about 20 paces. Whew! The agony! Once there, the performances hit the ground running with 36 Questions or Emily & Sanders by Adam Szymkowicz, Directed by the current Single Carrot Theatre Ensemble. It’s a cute, relatable piece about a couple, Emily and Sanders, on a first date, trying to break through the awkwardness when they finally decide to play a “game” where they have to get through 36 questions they’ve found on the Internet. This piece is a great way to start off the evening, though, outside of a traditional theatre setting, the performances seem a bit scripted and unnatural, but the text and story are authentic and entertaining. Next, cute Brian guides us down the street a few blocks, all the while keeping us engaged with questions and anecdotes relating to the piece or personal stories, to Church of the Guardian Angel where, after climbing a flight of narrow, old stairs, the audience is escorted into the sanctuary where we experience Grand Mal by Shawn Reddy, Directed by Brendan Ragan, dealing with a funeral and the dead man’s son or… sons? The material covers some existential topics such as time and space and, well, traveling through time and space and might be a bit predictable, but is enjoyable none the less. Leaving the church, we trek down to a corner spot where The Ninth Planet by Olivia Dufault, Directed by Lauren A. Saunders starts its performances right there on the sidewalk. Performed beautifully by Alix Fenhagen, Jessica Moose Garrett, and Elliott Rauh, this piece tells the tale of an exceedingly bright young woman who ventures off to find a better place and something new while, at home, she doesn’t apply herself in school and is stuck in a crazy situation with a single alcoholic dad. It takes a moment to “get” the piece, but the actors are committed and the space is very intimate, automatically immersing the audience. From there, the evening takes us to the Young Audiences offices for Tense White People Have Dinner by Jen Silverman, Directed by Dustin C.T. Morris. This funny piece takes us through a dinner party, of sorts, with two sisters who have very different relationships with their gentlemen. With eyeballs falling out and revelations being made, this piece is serious, yet funny with commendable performances, though Rohaizad Suaidi seemed rather scripted and over-animated, he still gives a committed performances to match the wonderful performances from Meghan Stanton, Matt Shea, and Lauren Erica Jackson. By the way, The Young Audiences offices is a great time to take a restroom break, should you need it! Bruce/Brenda/David by J. Buck Jabaily and Nathan Fulton (with Aldo Pantoja and Meg Jabaily), Directed by J. Buck Jabaily is next on the tour, with cute Brain guiding a few steps away from the Young Audiences offices to right in front of Single Carrot Theatre and this piece, based on true events, is definitely a highlight of the evening. Simple and performed impeccably by Aldo Pantoja, Nathan Fulton, and Meg Jabaily, this piece gives us insight into a hermaphroditic young person and a scrupulous, but respected Johns Hopkins doctor and events leading the sad ending of a person named Bruce, then Brenda, then David. It is a poignant, important piece that promotes all kinds of feels.
At this point, we’re back to Emily & Sanders (from 36 Questions or Emily & Sanders) to check in and see how they were doing on their first date and they’ve gotten through most of the questions and seem to make a connection. At this point, we also lose cute Brian as a guide in a very over-the top, absolutely scripted (I hope it’s intended to be) hullabaloo between Brian and Ben Kleymeyer, who could pull back the acting a bit, if authenticity is the objective, and Brian is “fired” or “quits” in a huff, leaving Ben to guide us to our next destination.
This time, we join forces with another group and are back to Church of the Guardian Angel and we are guided upstairs to a space that had a past life as a small gymnasium to experience Live Through This by Caridad Svich, Directed by Genevieve De Mahy. I’m going to admit it. Someone is going to have to explain the purpose of this piece to me. In a nutshell, it was like an art installment of various points of history with a piece of hanging art in the middle of the room that theatre-goers could participate in its creation by pouring paint onto it. A disembodied voice blares out of a single speaker on one side of the room with ambient music backing him up. Everyone is so busy reading the descriptions of the exhibits, hardly anyone pays attention to the voice or what he is saying, so, this one might want to be thought through a bit more. Aside from the distractions from the text, the piece just doesn’t make much sense to me, but it could be my fault… Maybe I should have concentrated more on the disembodied voice? After scratching my head from Live Through This, we are walked down the street to the Miller’s Court Building where we are treated to Itch So Bad by Joshua Conkel, Directed by Ben Klemeyer. This piece is hilarious, performed bravely and confidently by committed, eventually scantily clad actors Elliott Rauh and Dustin C.T. Morris. Poking fun at promiscuity and the risks that go along with such a blithe attitude toward sex, this piece (which is set up more traditionally with seats to take a load off) is another highlight of the evening adding a rag-tag live band of “Scabies” to help the story along with familiar songs that add an extra bit of humor to the already funny piece. The night begins to wind down in a garage/workshop across the street from Single Carrot Theatre with One More Time by Eric Coble, Directed by Brendan Ragan and this short piece, told completely through action, with one solitary word of dialogue, is practically silent but powerful. The actresses, Genevieve De Mahy and Alix Fenhagen are brilliant and exude so much emotion without speaking, it truly is a credit to their acting chops. The story tells of a reunion of sorts where both parties seems to have different ideas of what they want out of it and these actresses portray those feelings flawlessly. Ending the evening in the same garage/workshop The Therapist by Charles Mee, Directed by Genevieve De Mahy and, the ending of One More Time seamlessly slides into this piece. The garage door is raised and the rest of the ensemble from all the other pieces are standing there like Walkers from The Walking Dead and they rush in to envelope the audience with a speech performed enthusiastically by Paul Diem about the state of the arts and about artists in general. His charisma is spot on for this piece, even as he’s stripping down to his unmentionables! The audience is given little flags and other accouterments as Diem leads them out of the garage and down the street as if it is a march for art, ending at Single Carrot Theatre, coming around full circle.
All in all, it was an enjoyable evening and more like a leisurely stroll through Remington with the bonus of catching some theatre while out for a walk. The ensemble knows the materials and, more importantly understands the material and it all makes for a great night of Baltimore theatre.
Final thought… A Short Reunion presented by Single Carrot Theatre is a bold, innovative piece that the traditional theatre-goer might find a bit taxing, but it has a very personable feel and gives one a chance to explore the little corner of Baltimore where Single Carrot calls home – Remington. Roughly a mile walk, keep an eye on the weather and dress accordingly… you know how Maryland can get all bi-polar with its weather! Also, just as a note, if you have any disability that makes it difficult for stairs, unless Single Carrot has made arrangements for any foreseeable situation, there will be an issue in seeing a few of the performances because of stairs. You might want to give them a call ahead of time if you have any questions. Overall, the performance is quite enjoyable (and I got to experience it during a beautiful spring evening) and exudes the charm and quirkiness with which Baltimore drips. The tour is well-designed and thought out so there’s no unnecessary detours and though I may enjoyed certain performances more than others, I enjoyed all of them, as a whole. It’s called A Short Reunion but it’s also a short run so if you want a different kind of theatre-going experience; something new and quirky… and quite enjoyable… get your tickets now!
Short plays included in A Short Reunion:
36 Questions or Emily & Sanders by Adam Szymkowicz
The Ninth Planet by Olivia Dufault
Tense White People Have Dinner by Jen Silverman
Grand Mal by Shawn Reddy
Bruce/Brenda/David by J. Buck Jabaily & Nathan Fulton (with Aldo Pantoja and Meg Jabaily)
Itch So Bad by Joshua Conkel
Live Through This by Caridad Svich
One More Time by Eric Coble
The Therapist by Charles Mee
This is what I thought of Single Carrot Theatre’s production of A Short Reunion… What did you think? Please feel free to leave a comment!
A Short Reunion will play through April 30 at Single Carrot Theatre, 2600 N. Howard Street, Baltimore, MD. For tickets, call the box office at (443) 844-9253 or purchase them online.
Email us at backstagebaltimore@gmail.com
Like Backstage Baltimore on Facebook
Follow Backstage Baltimore on Twitter (@backstagebmore) and Instagram (backstagebaltimore)