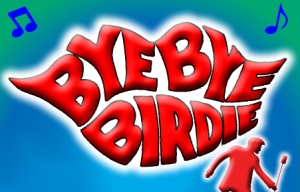 The 1950s was an interesting, white picket fenced, bobby socked, and black and white time in America and, though problems were bubbling under the surface, it was a simpler time. Elvis Presley broke through with his pelvis-shaking rock and roll, but there was still a certain innocence to his bad-boy persona and we couldn’t get enough. Artistic Synergy of Baltimore’s latest production, the classic Bye Bye Birdie with a Book by Michael Stewart, Music by Charles Strouse, and Lyrics by Lee Adams, takes us back to that bygone era and to a small town to give us a taste of nostalgia and a peek into 1950s suburbia. Bye Bye Birdie is Directed by Jeff Baker (who may or may not have been the Music Director, as well, since a Music Director is not listed in the program), with Choreography by Suzy Hasselbush, Set Design by Colby Aerford, Daniel DeJong, and Stanton Zacker, and Costumes by Amy Rudi.
Set Design by Colby Aerford, Daniel DeJong and Stanton Zacker is innovative, considering the space they had to work with. Artistic Synergy of Baltimore certainly doesn’t have the smallest stage in Baltimore, but it is still an intimate space and the use of spinning flats for different scene settings is practical and efficient. They don’t clutter the stage too much with set pieces but a few well-placed items give the idea of where the action is taking place and leaves space for the large cast. The painting and detail work by Ann Pallanck and Amy Rudai expresses the time period very nicely with bright, light colors and sets the mood nicely. The minimal, but appropriate Set Design adds value to this production, as a whole. 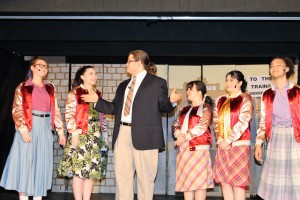 The Cast of Bye Bye Birdie. Artistic Synergy of Baltimore

Amy Rudai also took on the duties as Costume Designer and this aspect of the production is certainly a highlight. Rudai’s attention to detail is impressive and instead of going with the usual poodle skirts, saddle shoes, and cardigans, she manages to give us an authentic representation of the time in which this piece is set with below the knee knitted skirts, plain white athletic shoes for the young ladies, and plain jeans, Jack Purcell-looking shoes, and t-shirts/sweaters for the young gentlemen and suits and dresses for the adult cast. The Conrad Birdie costume could have had a bit more pizazz and glamour rather than looking like an ordinary “greaser” and the wardrobe for Rosie Alvarez look a bit out of place (I keep thinking 80s for some reason – could be the broad shoulder jackets) and a particular costume in Act II for “Spanish Rose” is unnecessary but overall, the costume choices are spot on and Rudai’s work is impeccable.
Choreography by Suzy Hasselbush is charming and appropriate for her cast. It’s obvious she knows her cast and has choreographed accordingly which is of the utmost importance for any choreographer. Now, that’s not to say anything is dumbed down for this cast. There are some impressive numbers including the opening “The Telephone Hour” and the trio for “Put on a Happy Face.” Hasselbush’s work lights up the stage and keeps this piece interesting.

The Cast of Bye Bye Birdie. Artistic Synergy of Baltimore

Baltimore theatre veteran Jeff Baker takes on Direction of this production and does a superb job. He understands the piece well and even though it’s musical comedy and poking fun at 1950s middle America, he takes it just seriously enough to tell the coming of age story in a meaningful way. He doesn’t shove the fact of the 1950s down our throats with clichés and obvious bits, but let’s the story unfold through the script and the performances. His casting is decent and he’s given us a well thought-out production.
Since no Music Director is listed in the program, I’m going to assume Mr. Baker took on those duties as well, knowing he has taken on this role in numerous productions in the past. The ensemble, as a whole, sounds fantastic and they blend well and harmonize together beautifully. The musical numbers are well rehearsed but it is unfortunate that it was decided to use canned music for this production (that’s recorded music, for those who might not be in “the know”). Bye Bye Birdie has such a wonderful score, it may have been nice to hear a live orchestra playing along supporting this dedicated ensemble. There were some hick-ups, skips and missed musical cues for actors that may have been smoothed out if a live orchestra and conductor were in attendance, but overall, the cast was ready and worked well with the recorded music. 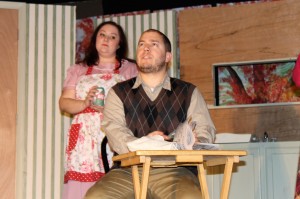 Moving into the performance aspect of Bye Bye Birdie, Stanton Zacker and Jennifer Hasselbush take on the roles of Harry and Doris MacAfee, the poor, defeated parents of Kim MacAfee and Randall MacAfee, with the former having been chosen to give heartthrob Conrad Birdie one last kiss before being shipped off to the Army. Both of these actors were dedicated and comfortable with their roles and portrayed them nicely. Hasselbush somehow embodied a mother of the 1950s and is very authentic in her interactions with her family making for a strong performance. Zacker is a bit scripted and lets some golden one-liners zoom right past but he is still believable as the frazzled father of a teenaged girl and his chemistry with his fellow cast mates is strong. Vocally, Zacker is impressive, as is Jennifer Hasselbush. In numbers such as “Hymn for a Sunday Evening” and the popular and standard “Kids” they were entertaining and gave very respectable performances.

The role of Conrad Birdie… the Birdie of Bye Bye Birdie, is tackled by Matt Peterson and he gives a good showing of the heartthrob, pop icon, Elvis Presley-esque character but, overall, I would have liked a little more suave, brooding, sex appeal and charisma. Yes, again, it’s a musical comedy, but if you’re gonna play a character inspired by Elvis Presley… work it, especially the charisma! The costume may have had a hand in it as well, as stated before, being dressed in just some jeans, a t-shirt, converse shoes, and a leather jacket. He looked more like a T-Bird from Grease than the most famous man in the country. However, that being said, Matt Peterson does NOT give a terrible performance does an admirable job in this role. He is dedicated to this role and certainly looks the part. He’s comfortable and does have a strong stage presence as well as a terrific, albeit soft, voice. 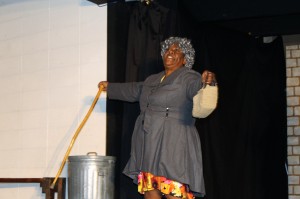 Melissa Broy Forston takes on the hilarious role of Mae Peterson, the helicopter mom (when helicopter moms weren’t cool) who hounds and guilt trips her adult son into seeing things her way. Forston takes this role and hits the ground running. She’s confident with a strong stage presence and her comedic timing is splendid. She understands this character and the humor and embraces both giving a strong performance. 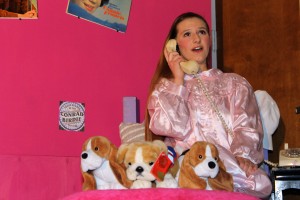 Hunter Lubawski takes on the role of Kim MacAfee, the sweet, naive teenager who wants to grow up too fast. Lubawski is cast perfectly as this character and she’s comfortable in this role. She gives a worthy vocal performance and is radiant in her numbers such as “How Lovely to Be a Woman” and “One Boy,” exuding that innocence and tenderness this character requires and her transition from young child to young woman is subtle but certain and her performance is commendable.

Often, you’ll see a performer in a supporting role who just stands out in a production and in this production that performer is Olivia Winter as Ursula Merkel, Kim’s fanatic, loyal, and number-one-Birdie-fan. Winter is definitely a highlight of this production because of her enthusiasm and dedication to her role. She’s got a beautiful voice that is highlighted in numbers such as “The Telephone Hour” and her character choices for this role are near perfect. She shines during ensemble numbers like “A Normal American Boy” and “Honestly Sincere” with her natural and confident performance. I’m looking forward to seeing future performances from this young actress.

Taking on the role of Rosie Alvarez, the loyal, love-lorn, secretary, and girlfriend of Albert Peterson is Alana DiSabatino. DiSabatino has a good command of the stage and does an admirable job with this challenging role and seems quite comfortable and dedicated. She understands her character and embodies the objectives and wants of Rosie, namely, becoming Mrs. Albert Peterson. She certainly entertains and keeps things moving in solo numbers including “What Did I Ever See in Him” and (especially) “Spanish Rose” though, the costumes and choreography might take away from the exceptional vocal abilities of this talented actress, leaving her breathless, at points. Overall, DiSabatino gives a praise-worthy and thoroughly entertaining performance.

Last but not least, Seth David as Albert Peterson, who is a standout in this piece. Though he may not look like the clean-cut, suit and tie gentleman of the mid-century business man with his modern looking long hair pulled back into a pony tail, he still embodies all the qualities and insecurities of this character. He works well with both Melissa Broy Forston as his overbearing mother and Alana DiSabatino as his pushy, but patient girlfriend, balancing his characters interaction between the both of them. His transition is seamless from a dedicated, allegiant son to a confident, independent man is believable and he manages to keep the character likable throughout. Vocally, David is a powerhouse and performs his numbers such as “Put On a Happy Face” and “Talk to Me” near perfectly with an impressive grasp of the choreography given to him making for a superb performance.

Final thought…Bye Bye Birdie is a fun, lighthearted piece that’s perfect for community and small theatres and Artistic Synergy of Baltimore gets it right with this production. They have a very dedicated and talented cast and crew and the production is well-thought out with a good pacing. Aside from the canned music, the cast handles the material well and they make this classic, often-produced piece their own making for an enjoyable evening of theatre.
This is what I thought of Artistic Synergy of Baltimore’s production of Bye Bye Birdie… What did you think? Please feel free to leave a comment!
Bye Bye Birdie will play through March 19 at Artistic Synergy of Baltimore, Prince of Peace Lutheran Church, 8212 Philadelphia Road. For tickets, call the box office at (410) 288-4281 or purchase them online.
Email us at backstagebaltimore@gmail.com
Like Backstage Baltimore on Facebook
Follow Backstage Baltimore on Twitter (@backstagebmore) and Instagram (backstagebaltimore)