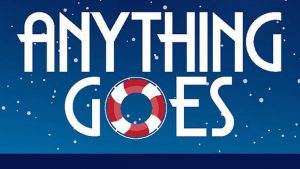 People do crazy things for love, especially young people, even if it means crossing the Atlantic Ocean on a luxury cruise ship, without a ticket and luggage, and bunking with a wanted criminal. In Silhouette Stages latest production, Anything Goes, with Music & Lyrics by the legendary Cole Porter and an Original Book by P.D. Wodehouse & Guy Crouse, and a New Book by Timothy Crouse & John Weidman, we get a look at how that kind of story turns out. This production, the 1987 revival version, is Directed by Conni Ross with Music Direction by William Georg and Choreography by Tina Marie DeSimone. 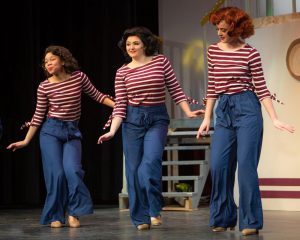 Anything Goes, in a nutshell, takes place aboard the S.S. American and brash Reno Sweeny, famous nightclub singer and evangelist, is on her way to England. Billy Crocker, an old friend has stowed away because he wants to be near his love interest, Hope Harcourt, how happens to be engaged to a wealthy and elderly gentleman, Evelyn Oakleigh. Throw in a loveable Public Enemy #13, a case of mistaken identity, and a handful of showgirls called Angels, and you have a triste worthy of witty and brash songs of Cole Porter.

The setting is a character of its own and when one mentions Anything Goes, usually, the first thought is “That show that takes place on the ship.” Set Design by Alex Porter is admirable with the distinct levels that make this setting interesting but other than the levels, the set seemed a bit sparse. It could be all the whitewashed walls/flats with very little color but other than being a little boring in the aesthetics, the design is classic and well-built. This is a good showing for Porter and he and his team are to be commended for their efforts.

Taps, taps, taps! That’s another thing one thinks of if one is familiar with Anything Goes and taps we have! Choreography by Tina De Simone is high energy and engaging… for the big, popular numbers, namely “Anything Goes” and “Blow, Gabriel, Blow.” The other numbers seem to be afterthoughts such as poor Bonnie’s featured numbers, “Heaven Hop” and “Let’s Step Out.” The savior of those numbers are the vocals and brilliant presentation of Bonnie by Maddie Bohrer, but we’ll get more into that later in this review. Looking to the bright side, DeSimone’s work shines and is precise and outstanding in the aforementioned “Anything Goes” and “Blow, Gabriel, Blow.” The energy is high and the ensemble is on point. DeSimone really gets these numbers and style and has created a fresh look that is a joy to watch. 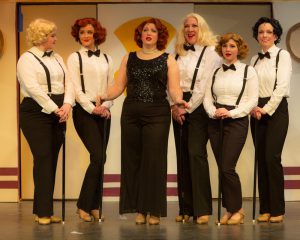 Vocally, this ensemble is phenomenal. With the help of Sound Design by Alex Porter, this ensemble is spot on and kudos must go to William Georg for his Music Direction. Many of these songs are well-known, so any flaws are easily noticeable, but, there weren’t many to speak of. The music is canned (recorded), but this cast is well rehearsed and they have this score down pat making for an enjoyable and toe-tapping experience.

This production is helmed by Director Conni Ross and she gives us a charming presentation of this beloved piece and her staging is smooth but it loses momentum at times which effects the comedic timing. Overall, Ross has done a splendid job with this production – you work with the material you got, so, she has given us a strong showing. The presentation isn’t necessarily fresh and innovative, but it keeps the more traditional, old-fashioned presentation in-tact, and that’s always a good thing. If it’s not broke, don’t fix it, right? My only issues with Ross’ work is her curious casting choices. Now, in community theatre, you work, first and foremost (or are supposed to) with the folks who come out for auditions and may the best man/woman land the role. I get that. But this cast seemed quilted together. Age ranges seem to be all over the place and there are actors who look to be playing characters younger or older than they actually are which throws off the entire feel of the production, for me. Regardless, Ross has given us a pleasant show that makes for a wonderful evening of theatre. 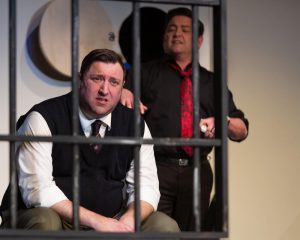 Moving toward the performance aspect of this production, we have Jim Gross as Billy Crocker and Rebecca Hanauer as Hope Harcourt, the young lovebirds of this story. Gross seems to have a good grasp of this character, but I question his casting in this role. Again, he gets this character, knows his objectives, and follows staging nicely but… I didn’t buy it. His delivery of the material is good, if slightly scripted at times, and, occasionally, his comedic timing is a little off. Vocally, Gross can hold his own but he just doesn’t fully capture the energy and urgency the character requires. However, that being said, he’s comfortable in the role and gives a confident performance. Along the same vein, Hanauer seems a bit miscast, as well. She, too, understands her character well and goes through the motions, but I just didn’t buy it. Vocally, Hanauer has a beautiful soprano and performs her featured songs quite well, such as “De-Lovely” and “All Through the Night.” I think one of the main issues is the chemistry between Gross and Hanauer. It’s easy to see their great friends, but it would be a stretch to think they were anything more than that. In general, both give good performances and are consistent throughout the show. 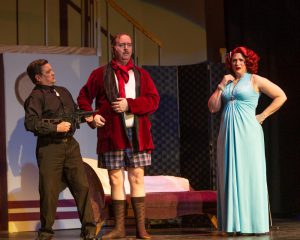 Though this is a musical comedy in which all characters have a certain comedic value, Ryan Geiger as Sir Evelyn Oakleigh and Todd Hochkeppel as Moonface Martin have got the comedy down pat. These two are a pleasure to watch and their portrayals of these characters is top notch. Geiger embodies the role Evelyn Oakleigh and pulls off the pompousness mixed with charm that endears him to the audience. His comedic timing is spot on and he plays the character seriously enough to not take him over the top which makes for a solid, hilarious performance. Also, Hochkeppel seems to have been born for this role. His understanding of this character is clear and the way he portrays the loveable, but wanting-to-be-bad Moonface is quite enjoyable. There’s a tendency for actors to take this role over the top, but Hochkeppel keeps him reigned in just enough to be farcical but still charming and non-obnoxious. Kudos to both of Geiger and Hochkeppel for their efforts. 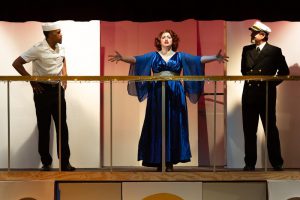 Playing the role of Reno Sweeney, an actor has some pretty big shoes to fill but Robyn Bloom take the reigns and makes the role her own. Seemingly channeling the spirt of Mae West, Bloom is comfortable and confident in this role and it shows. She gives an assured performance and makes the character likeable from the moment she steps onto the stage. Her Angels (Lisa Rigsby, Marcie Prince, Maggie Mellott, Tirana McCorkle, Abby McDonough, and Miranda Snyder) impressively keep up as well, displaying their apt dance and tap skills throughout. Her delivery is natural and her timing is fantastic. She has a clear, smooth voice that resonates throughout the theatre, especially in her featured numbers such as the highly energized title song, “Anything Goes” and the hand-clapping-foot-tapping “Blow, Gabriel, Blow.” Though she doesn’t have the usual “belt” actresses who play this character have, her performances of the songs and her dance abilities are a joy to watch making for a superb performance, overall. 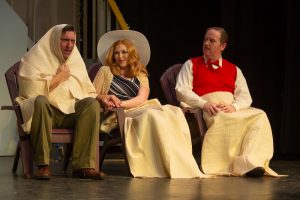 The standout in this particular production is Maddie Bohrer as Bonnie (remember, I mentioned her earlier in this review). Now, Bonnie is more of a supporting character, but Bohrer has put her front and center in every scene she’s in. She knows this character well and portrays her as a street-wise, but caring girl who does what she can to help her friends. Bohrer has the perfect look for the character and her delivery of the dialogue is clear and authentic. The thing that sets her apart is that she is so expressive, and one can’t help but notice her even when the entire ensemble is on the stage. She keeps her performance consistent throughout the entire production and is an absolute joy to watch. Her renditions of “Heaven Hop” and “Let’s Step Out” have you wanting more from her character and she’s one to watch. Hats off to Bohrer for an outstanding showing.

Final thought… Anything Goes exists mainly to highlight the songs of Cole Porter. There’s not much to the Book and, it seems very haphazardly thrown together to work around the music. Production-wise, there are a few interesting casting choices, the Set Design is appropriate, but a bit flat, and the choreography seems more concentrated in the more popular numbers, which leaves the other dancing a little lackluster throughout. However, the vocal work of the entire ensemble is quite admirable and makes up for the minor flaws in this production. Overall, it is a good, solid production and the ensemble is giving 100% effort and, it is a favorite classic to which the audience responds well. If you’re in it for a good fluffy, entertaining show, this one’s for you and you will have a delightful evening of theatre.

This is what I thought of Silhouette Stages’ production of Anything Goes… What did you think? Please feel free to leave a comment!