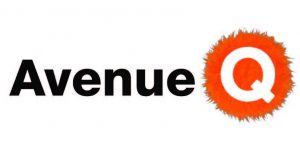 If you’re looking for some good old fashioned educational television that teaches kids how to count to 12 or has a word of the day presented by a green frog… you won’t find any of that here at Cockpit in Court Summer Theatre’s first offering of the season, Avenue Q by Jeff Whitty and Music and Lyrics by Robert Lopez and Jeff Marx, Directed by Todd Starkey with Music Direction by R. Chris Rose and Choreography by Elise Starkey. This is a stretch for Cockpit in Court, compared to their previous showings and I, for one, am glad they took the leap. It’s a funny, in-your-face show that leans more toward adult humor that will have you laughing and nodding your head about things you often think of but don’t say because you’re too courteous to do so. 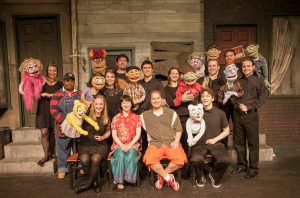 Avenue Q tells a tale about a college graduate, Princeton, trying to find his “purpose” in life. It is set in NYC, all the way out on Avenue Q (because Princeton couldn’t afford anything more). While he is struggling to find his purpose, he meets friends, finds love, loses love, and finds it again. Loosely inspired by the famous Sesame Street, this puppet-filled world reflects the crazy, sometimes filthy, adult realities of the world around us. We learn that real life isn’t really as simple as we dreamed it would be when we were kids, but this show hints that, even though it’s not like the dreams we had, life is still colorful and worthwhile.

Bob Denton’s Set Design is simple, yet superb. His design treats us to a set of detailed row homes and shop fronts that have been seemingly turned into apartments and his choice of drab, dull colors and use of second story levels adds a distinct realism to the piece. His attention to detail is fantastic and he uses his space wisely, creating a unit set with set pieces that enter and exit to express more specific spaces. Overall, Denton is to be applauded for his work.

Costume Design by Eva Grove is spot on as the characters come to life in their individual attire. Though most of the puppets probably came in their own garb, Grove’s work is still evident in the “human” characters in this piece and her choice of costumes enhanced the characters. For instance, the unkempt look of Brian, the slacker, and the more put together but traditional Asian fashions for Christmas Eve really took these characters to the next level. Kudos to Grove for a job well done.

Elise Starkey took on the task of Choreographing this piece and creates engaging movement that is a delight to watch. She seems to know and understand her cast and their abilities and her choreography enhances their abilities and makes for fun, upbeat numbers that the cast obviously enjoys performing. This production doesn’t require huge dance numbers but Starkey has created choreography that is simple enough to fit perfectly into the production but intricate enough to stay interesting and entertaining.

Veteran Music Director R. Chris Rose has guided this ensemble beautifully keeping them in harmony and on key. Many of the ensemble members are singing in character voices, but Rose has not skipped the musicality in spite of that challenge. He has a tight grasp on this material and it’s apparent through the performances of the apt ensemble. It’s absolutely worth mentioning the stellar and on point pit orchestra he’s assembled though it is unfortunate that the program (both hard copy and online) does not list the players as it wouldn’t be a musical without music and this pit orchestra should be applauded for their efforts. 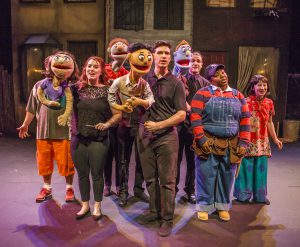 Todd Starkey takes the helm of this production and is no-holds-barred, which is just the kind of kick in the rear that Cockpit in Court needs. He takes the script, in full, and presents it with a clear vision and fearless attitude. Now, this type of show could be considered tame in some theatres in town, but this is actually a big step for Cockpit in Court and I’m very excited they’re taking it. Starkey’s casting is superb and it’s clear he has a great comprehension of the text and the message that being an adult just plain sucks sometimes, but life goes on and we figure things out as we go. Kudos to Mr. Starkey for a job very well done on this production.

Moving on to the performance aspect of this production of Avenue Q, I’d be amiss if I didn’t mention the hard work this ensemble put into the performance of this production. It must be a major challenge working with puppets but these actors seem to have mastered this task. In some cases, two people are needed to operate one puppet and those teams are flawless. The audience may even forget these characters are puppets because the actors are doing such a great job in their operation and portrayals.

As the human characters, Tigga Smaller as Gary Coleman, Stanton Zacker as Brian, and Suzanne Zacker as Christmas Eve give terrific performances and hold their own against the novelty of puppet characters. Smaller, though a bit scripted and stiff in her dialogue is a powerhouse when it comes to vocal stylings and Stanton Zacker and Suzanne Stacker’s characters are spot on with great chemistry and timing that is necessary for this piece. 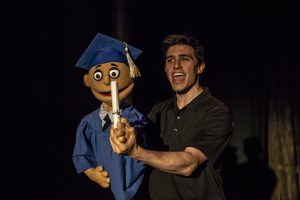 Josh Schoff takes on Princeton, our “hero” and his character work is notable had one really feels for this character throughout the show. Vocally, he pulls off his numbers nicely, but his strengths lie in the character which he portrays authentically and with confidence giving a great showing.

Will Meister as Trekkie Monster (with Tate Erickson) may be one of my favorite characters as it seems Trekkie Monster has lost all give-a-f***. Meister’s portrayal, with the help Erickson (he’s a big monster so, he needs two puppeteers to manage), makes this character both crude and lovable. His featured number “The Internet is for Porn” is definitely funny and the tinge of truth it has makes on think. The teamwork between Meister and Erickson is top-notch and they are to be commended for their portrayal as Meister is to be commended for the character study he’s put into it.

A highlight in this piece is Clare Kneebone as Kate Monster, the sweet “girl-next-door” who, like Princeton, has aspirations but doesn’t quite know how to achieve them. Kneebone plays her sweetl,y but real and rough around the edges, which makes this character so authentic. She understands this character and the material and even though she is using a character voice, the realism comes through because of that comprehension. Vocally, Kneebone does not disappoint with a clear, booming voice that resonates throughout the theatre as it does in her featured, poignant number, “There’s a Fine, Fine Line.” She’s certainly one to watch. 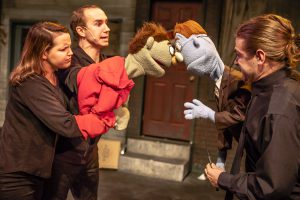 Amanda Poxon and Will Poxon as Nicky and Josh Starkey as Rod. Credit: Cockpit in Court

Definite standouts in this production are Josh Starkey as Rod and Will Poxon (with Amanda Poxon) as Nicky. These actors take their performances to the hilt and completely embody these characters. Starkey, as Rod, skillfully uses a character voice that fits perfectly (and is reminiscent of Bert from Sesame Street fame) and an uptight attitude to match. He brings this character to life easily and through the character voice, vocally, he is spot on, especially in his cute and tender featured number, “Fantasies Come True.” A perfect match for Starkey’s Rod is Will Poxon’s Nicky, who he operates with Amanda Poxon). If any of these characters are perfect, it would be Nicky. Will Poxon’s character voice couldn’t be more perfect (which, of course, is an homage to Ernie from Sesame Street) and it takes his performance to the next level. It’s worth mentioning, too, that Amanda Poxon, though silent, gives a stellar performance with just her face and gestures that help this performance rise to the top. In his featured and hilarious number, “If You Were Gay” will have you in stitches and he doesn’t falter once, vocally. Kudos and congratulations to Starkey and Poxon for impeccable performances.

Final thought…Avenue Q is a fun and quirky look at the adult side of puppetry and no-holds-barred look at life from the point of view of someone just starting out in the real world. The production value is phenomenal, the performances are top-notch, the puppetry and character work are stellar, and the story/script, though not suited for all, is engaging and good in the way that it is not trying to be more than what it is… a comedy that makes people laugh (sometimes nervously) and says the things we are all sometimes thinking but are too polite to say. The music is modern with some catchy tune and makes for a delightful evening well spent. Don’t let this one pass you by this season. Get your tickets!

This is what I thought of Cockpit in Court Summer Theatre’s production of Avenue Q… What did you think? Please feel free to leave a comment!

(Puppets Constructed by Character Translations, Inc. for Music Theatre International. Avenue Q has not been authorized or approved by the Jim Henson Company or Sesame Workshop, which have no responsibility for its content.)