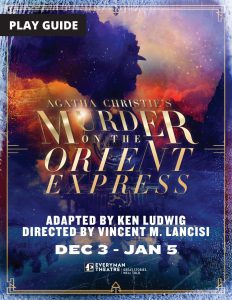 Murder mysteries pop up daily in hamlets all over the world in community theatres, church theatres, and small theatres and audiences can’t seem to get enough of them. It’s always pleasant to see when a professional theatre takes on the challenge of a classic and well-known piece and adds the polish it deserves. Everyman Theatre has done just this with their latest offering of Agatha Christie’s Murder on the Orient Express, Adapted by Ken Ludwig, and Directed by Vincent M. Lancisi.

For those who may not know, Agatha Christie’s Murder on the Orient Express concerns itself with a murder, of course, of an American tycoon and nine potential suspects on a luxury train with the world-famous Detective Hercule Poirot, who is on this particular passage by chance, to solve the case before the murderer can strike again. 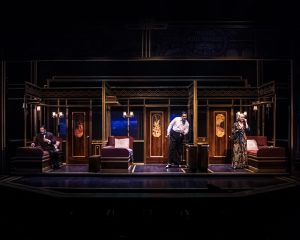 The technical aspect of this production is a tour-de-force for Everyman Theatre. Now, I have yet to be disappointed by any Set Design from this company and Daniel Ettinger always impresses, but this design is A+ top notch. Transforming from a small, elegant café to the Orient Express itself with sliding walls and set pieces takes this production to the hilt of good design. The art deco detail is remarkable, and the dark color scheme adds to the tension and mood of the entire piece. Ettinger is to be commended for his brilliant efforts for this production. In the same vein, Sound Design and Original Music by Pornchanok Kanchanabanca is just as inspiring, transporting the audience into the story with a period score and sound effects that blend in and enhance the production rather then take away from it. Kudos to Kanchanabanca, as well, for an exquisite design and score.

Period pieces are a challenge in themselves, but costuming a period piece takes a champ and Costume Design by David Burdick with Wig Design by Anne Nesmith is not only stunning but authentic, placing these actors in the time accurately and with exquisite detail. Hats off to Burdick and Nesmith for their superb designs. 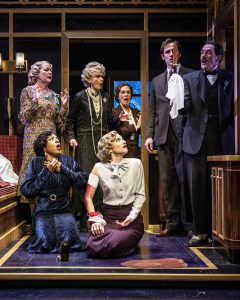 Vincent M. Lancisi, Founder and Artistic Director, takes the helm of this piece and he knocks it out of the park with a well-staged production that has great pacing, and a clear understanding of the material. Scene transitions are smooth (with help from Daniel Ettinger’s Set Design), and the character work is excellent. Agatha Christie’s work is, of course, well-known but this title is definitely one of her most well-known works but Lancisi has stepped up to the challenge and presents this story in a tight, polished production that makes for a thrilling night of theatre.

Moving on to the performance aspect of this piece Danny Gavigan gives a marvelous performance as Colonel Arbuthnot while doubling as Samuel Ratchett, though the contrast in appearance was nothing more than a wig and clothes, but still enough to be believable and he has a good grasp of both characters. He has a good chemistry with Hannah Kelly as Mary Debenham, and Kelly gives a charming, strong performance as a young woman who is both independent and wants to love and be loved at the same time. Kudos to both Gavigan and Kelly for solid, confident performances.

Taking on the role of the young, beautiful, and confident Countess Andrenyi is Lilian Oben. Though Oben’s delivery is a bit off, due to a curious accent she’s attempting, her character work is splendid and she seems to have a tight grasp on her character making for a robust and enjoyable performance, overall. 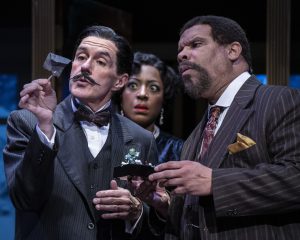 Not all characters are guests on the Orient Express and taking on the roles of Monsieur Bouc, a type of executive for the company that owns the train is Jefferson A. Russell while M. Scott McLean takes on the role of Michel, the conductor, and doubling as the humorous Head Waiter. Both Russell and McLean have a comedic responsibility in this production and both pull it off beautifully with flawless timing and delivery. Even in the intense bits of this story, Russell manages to bring levity with his character and it’s worth mentioning the small, but hilarious run McLean has as the Head Waiter in the beginning of the story in which he embodies this snooty character who gets his comeuppance in the end. 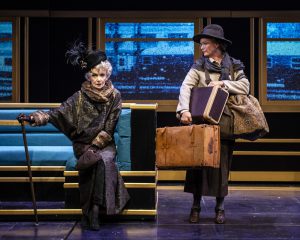 Helen Hedman as Princess Dragomiroff, a set-in-her-ways curmudgeon Russian Princess who gives Poirot the run-around, and Beth Hylton as Greta Ohlsson, a delicate, but steadfast woman who isn’t really cut out for murder, or seems not to be anyway, have a good rapport and work well off of and with each other. Hedman takes on this role with gusto and embodies this character giving her just the right amount of slyness and secretiveness that is required while Hylton does not disappoint with her portrayal of Greta. Hylton has a good comprehension of this complex character and plays her with a fine balance of sensitivity and boldness that makes her interesting. Hedman and Hylton are to be commended for their efforts in their performances.

Highlights in this particular production are Tony Nam as Hector MacQueen, the personal secretary and Guy Friday of Rachett, and Deborah Hazlett as Helen Hubbard, an obnoxious, rambunctious American on holiday. Nam knows his character and plays him with purpose and confidence giving a sensational performance and blending an air of self-assuredness and delicacy in his character. Hazlett, too, knows her character through and through and plays her brilliantly with a sass and slight darkness that is absolutely appropriate. Hazlett is a calculated whirlwind portrayal and gives a top-notch performance. Both give strong, confident, and authentic performances making them the highlights of this production. 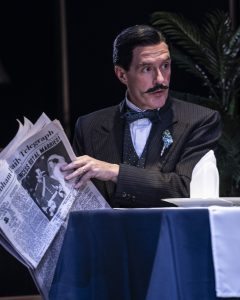 The standout in this production is, hands-down, Bruce Randolph Nelson as Hercule Poirot. Detective Poirot is the pivotal character in this piece and Nelson knows him inside and out. With the perfect balance of drama and comedy, Nelson makes Poirot, a quite fussy man, likeable and engaging at once. He plays the character with a no-nonsense but compassionate attitude that shines through in his stage movement and his delivery, of which he has a deep understanding. Nelson’s performance is not one you want to miss this season. Kudos to him for a job quite well done.

Final thought… Agatha Christie’s Murder on the Orient Express is a classic Agatha Christie story that will hold up through the ages. Murder and mystery are two topics that we, as humans, are fascinated by, whether we like to admit it or not. If it weren’t the O.J. Simpson case wouldn’t have gotten ten minutes of air time! But Agatha Christie has this genre down to a science and Ken Ludwig’s adaptation doesn’t stray to far from it making for successful material. The performances were strong, the staging was smooth and engaging, and, overall, it’s a polished, well put-together production. Technically, this production takes the cake and Set Design is top notch, worth the price of admission. This is a great addition to Everyman’s season and it’ll be a mystery to me if you don’t get your tickets ASAP.

Agatha Christie’s Murder on the Orient Express will play through January 11 at Everyman Theatre, 315 W Fayette Street, Baltimore, MD. For tickets, call the box office at 410-752-2208 or you can purchase them online.