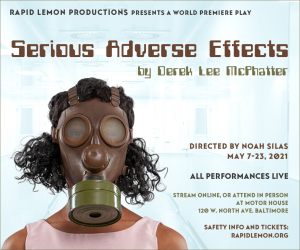 Since we’re all going through a pandemic at the moment, one this writer hopes is the final phases, have you questioned health care ethics and equality? Well, Rapid Lemon Productions is back on the stage with their latest in-person or live-streamed option, the world premiere of Serious Adverse Effects by Derek Lee McPhatter, Directed by Noah Silas, and they take on this question along with addressing ethics, guilt, and yearning for forgiveness from others and oneself in a well put-together, brand-spanking-new production that will have you questioning, as well.

In a nutshell, Serious Adverse Effects handles hard, important issues that are as relevant today, if not more, than when Derek Lee McPhatter wrote it a few years ago. Though surreal at its base and seemingly hodgepodge, asking the audience to go on an almost psychedelic journey, he handles the dialogue beautifully, addressing the hard questions that have come to light, especially in the last few years, about inequity in the medical field, if we’re truly taking care of everyone as we should be, and who a majority of the Guinea pigs and test subjects are for trials of new medicines and treatments. He also masterfully opens the conversation to more holistic treatments of ailments (“The Syndrome” in his story) and the power of healing oneself through the ones mind. It’s an interesting notion and, depending on who you talk to, seems to work effectively for some folks. You will get all this, and more… if you pay close attention. That’s the key; paying attention. Otherwise, you’ll get lost in th surrealism. The effectiveness of this piece, however, comes in having POC characters/actors discussing and bringing attention to the inequalities of the medical field (and in general) to the forefront and it’s much more valuable than having non-POCs having this discussion because the characters and the actors playing those characters have a better understanding and experience they can relay. But that’s just this reviewer’s humble opinion. Overall, aside from the surrealistic moments which may ask a bit much of the audience, it’s a well thought-out, poignant script and story that needs to be told. 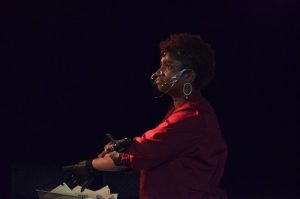 For transparency’s sake, I have to say I viewed this presentation online, so, my perception may be slightly skewed as I only have a virtual viewing to go on. I will say, Rapid Lemon might want to tweak their technology a bit. I missed a lot of dialogue due mainly to sound issues (it’s a Zoom presentation), but, thankfully, was able to obtain a script to fill in the blanks here and there. If they haven’t already done so, my suggestion would be to have someone in the organization watch it online, and figure out what needs to be done with camera placement and sound.

That being said, the production is still enjoyable and well thought-out. Set Designer Bruce Kapplin, to his credit and expertise, has kept things simple with a few set pieces (desks, counters, etc.) and props and it is quite effective and immersive. The audience is treated to a futuristic, sterile lab/doctor’s office where all the action takes place, and this along with Projection Design by Director Noah Silas brings every scene together to create a captivating, aesthetically pleasing set design.

Costume Design by Deana Fisher Brill is appropriate and authentic, giving the characters a relatable look while keeping in touch with the differences in their positions and authority. The simple but efficient design adds production value without taking away from the story itself. 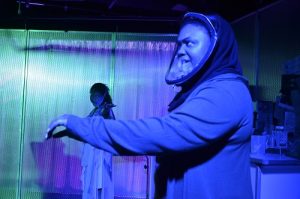 Producer Max Garner also puts on the Sound Designer hat and this design is spot on from the funky incidental music to the crucial sound elements that move each scene along. The in-show, soothing, new-age, surrealistic soundtrack brings the into the scenes bringing just that much more immersion to the production. Along with Sound Design, Lighting Designer Allan Sean Weeks pulls the audience in with the same superb surrealistic, colorful, dreamy design that matches perfectly with Gardner’s design. Kudos to both Garner and Weeks for their efforts on this production.

Director Noah Silas seems to have a good grasp of this material and presents it clearly with just enough bells and whistles, but not too much as to take away from the subject at hand. He’s handling a new piece of theatre, which is no small feat, and he manages to bring forth the story through his simplistic but effective blocking and his casting his spot on.

Speaking of casting, speaking on the performance aspect of this piece, this small ensemble of four navigates this material wonderfully. Everyone has a good comprehension of what the author is trying to say and they convey it with ease, giving their all. 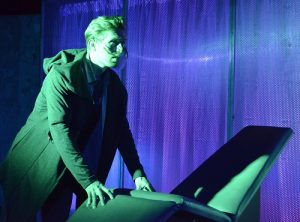 Maria Marsalis in more of a supporting role of Nia, the sister lost and/or trapped in a bizarre dimension due to her treatment for The Syndrome, plays her part hauntingly well and makes her limited time on stage matter. She may lean toward the melodramatic, occasionally, but it works for the role and she pulls it off effectively.

Taking on the role of Brandon, the frustrated, over-protective fiancé to Paula, is Max Johnson and he takes on this role with gusto. Maybe a little too much gusto at times, but it mostly works for the part. The contrast of the calm demeanor of Dr. Vye and his outbursts is interesting to watch, but there are times where I’d like to have seen a more toned-down delivery of the dialogue. Regardless, Johnson is well cast in this role and gives a terrific, intense performance that is warranted for the role.

Kyla Hammond tackles the role of Paula, an ex-patient of Dr. Vye’s who was a test subject for treatments for The Syndrome. Hammond gives a superb performance emoting both the pain and anger that is within her character. Her delivery of the dialogue is natural and the intensity and urgency is clear cut. She seems to have a good understanding of her character and portrays her delicately, but with passion that is fitting of the role. Kudos to Hammond on her work in this production. 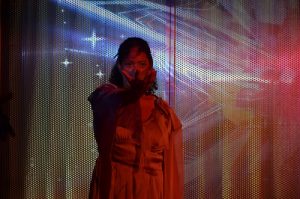 Lastly, we’ve come to Dr. Vye, the tormented, guilt-ridden doctor, who was only a grad-student when the initial tests for treatments for The Syndrome were happening. This strong character is portrayed by the apt and knowledgeable Valerie Lewis. Lewis is a highlight of this production bringing a certain flair and nobility to the situation at hand. She’s well-rehearsed and gives this role 100% effort making the character sincere enough, expressing her guilt, need to right a wrong, and for forgiveness, to make the audience feel sorry for her anguish. The playwright makes a point in making a putting a black woman in a position of authority and knowledge fighting the very inequality it addresses in the story and it’s quite effective. Lewis absolutely shines in this role and I can’t wait to see more of her work in the future.

Final thought…  Serious Adverse Effects from Rapid Lemon Production is a dreamy, self-evaluating piece that addresses the questions of health care inequality, guilt, medical ethics, and hope and progress that happens through research and hard work. Though the piece asks a lot of its audience and depends on a certain suspension of disbelief, it still hits its mark through a pleasing aesthetic and soothing sound design that captures one’s attention. Production design is pleasing and effective and performances are top notch, though I would suggest seeing it in-person, if you’re able, as the tech for online streaming might have to be looked at and tweaked to get the full effect. In the current social climate, this is an important piece that needs to be seen and experienced, so get your tickets now!

This is what I thought of Rapid Lemon Productions’ production of Serious Adverse Effects… What did you think? Please feel free to leave a comment!

All performances will be live, and available both online and in person at Motor House, 120 W. North Avenue Baltimore. In-person attendance will follow strict COVID safety protocols, including:

For the safety of our workers, additional measures have been taken: All participants are required to produce recent negative COVID test results prior to any in-person rehearsal, where temperatures will be taken and masks worn at all times.