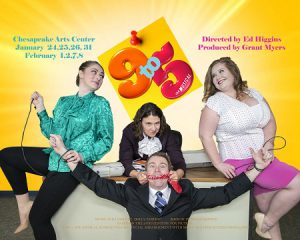 “They let you dream just to watch ’em shatter…” Your employer that is. The good folks at Stand Up for Theatre (SUFT) encourage you to dream and would never let you down. This time they are dreaming about equality in the workplace, a fair wage, and men who act like gentleman, as they bring to life 9 to 5: The Musical, Directed by Ed Higgins, with Music Direction by Brandon Seehoffer, and Choreography by Lenore Florez. Once again, they do not disappoint.

We go to the theatre to be entertained. Over the years I have come to accept that Stand Up for Theatre gives me so much more than simple entertainment. Sure, they provide quality productions that keep me laughing, crying or (insert emotion here), but it’s their commitment to keeping me thinking that sets them apart. Again, they have delivered an entertaining production that is thought provoking. Donald Rumsfeld once said, “There are known knowns. These are things we know that we know. There are known unknowns. That is to say, there are things that we know we don’t know. But there are also unknown unknowns. There are things we don’t know we don’t know.” My wife has been in the same industry for over thirty years. I asked her what she thought and what she had noticed over the years regarding gender equality in the workplace. It turns out that I may have turned a blind eye to the subject, or at the very least, there was plenty that I didn’t know that I didn’t know. THIS is what separates SUFT from any other theatre company.

Director/Set Designer Ed Higgins does a nice job of using the playing space and gets the most he can from his actors. Higgins is no stranger to the black box performance space and in the past has come up with some wonderful staging. This time, however, he seems to have gotten a little too imaginative for his own good. This, in my opinion, painted acclaimed set builder Jordan Hollett into a corner. Higgins decided to break the set into thirds by using front facing panel curtains. Whichever part of the set was being used there was an opening, while the panels covered to other two sections. While an interesting concept on paper it made for poor viewing. I sat in the center section, house left, and could not see everything that was happening stage left. Many scenes were conducted there and at times I heard voices but could not see actors. Perhaps using a half wall between sections, or better yet, leaving the playing space open and letting the audience use their imagination would have been a better choice. It definitely would have made for easier viewing.

Music Director Brandon Seehoffer does a nice job with the cast. His three leads are amazing and an absolute pleasure to listen to. Lenore Florez takes on the role of Choreographer and delivers a lively entertaining show. Florez’s work with the smaller numbers is detailed and does not go unnoticed, but it is her ensemble numbers that stand out. She works the large ensemble very well in a small space and should be commended for her efforts. As an added bonus to the production, Andrew Vida has put together a lighting design that is one of the best I have seen in that space.

The trio of Erin Cassell (Violet), Sarah Burrall (Doralee), and Jenna Sharples (Judy) seemed as though they had been working together for years. They deliver a tight, crisp performance that is not to be missed. Vocally they are unmatched. They all have beautiful harmonies and a belt, and they know when to cut loose. They are not mic’d but have no problem singing over the recorded tracks. I recommend sitting close to the stage so that you don’t miss the lovely undertones and blending when they all sing together. In addition to their voices, these ladies know how to act. Each is perfectly cast for their role and they deliver a performance that is worth seeing a second time.

For as amazing as the three leads are, the big show stopping number of the evening is performed by one of the supporting actors. Scarlett Corso’s performance as Roz Keith is award winning. Corso pours her heart and soul into her character and it is a performance for the ages. From the very first time she hits the stage to the closing number Corso is vibrant, in character, and a pleasure to watch. Sometimes you see a community theatre production and wonder how an actor could possibly compare to the original production. Scarlett Corso makes the role her own and delivers a performance better than any I have seen.

9 to 5: The Musical runs through February 8 at the Chesapeake Arts Center. It is a show that is both entertaining and thought provoking. I encourage you to go see it.

This is what I thought of this production of 9 to 5 the Musical at Stand Up for Theatre.… what do you think?

9 to 5 the Musical will play through February 8 at The Chesapeake Arts Center, 194 Hammonds Lane, Brooklyn Park, MD. For tickets, purchase at the door or purchase them online.

Love is an emotion and information is tangible but both have so much to do with each other. People are weird and things are important and that’s just how it is in this world we live in. Both love and information are acquired and expressed differently by everyone and Fells Point Corner Theatre attempts to address this in their latest offering, Love & Information by Caryl Churchill, Directed by Deidre McAllister and what we get is an abstract, frenetic presentation of those different processes.

Deirdre McAllister takes the helm of this production and the staging is on point dealing with at least 40 small vignettes, ranging from 30 seconds to a few minutes, but McAllister is on top of it. The theme of human dealings and interaction with electronics and technology is clear and, though it all seems jumbled, McAllister seems to have a grasp on the material and presents it in a solid presentation. Helping McAllister’s vision is a simple, minimal but effective Set Design by Michael Vincent of just solid light color walls and a few set pieces such as a table and some chairs. Though sparse, the design works well with the piece and the very different stories each vignette tells and Vincent is to be commended for his keep-it-simple design.

Lighting and Sound Design by David Crandall is spot on making for smooth transitions and engaging visuals. His use of local music from Horse Lords, adds to the charm of this piece and fits perfectly with the production as a whole. Adding to the rich technical aspect of this production is Projection Design by Chris Uehlinger, who has yet to disappoint, and his design works in tandem with Crandall’s design adding interesting levels and textures. 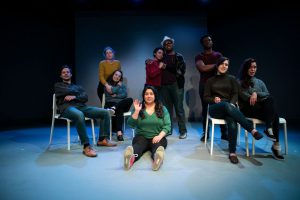 For the performance aspect of this production, I’d be amiss if I didn’t say this ensemble of nine performers is stellar and giving 100% effort. I may not like the material, but these well apt actors keep the piece engaging and entertaining.

To name a few, Willard Brewington III is splendid as “The Child Who Didn’t Feel Pain” and Caitlin Weaver impresses in the same short as well as “Memory House.” Nina Kearin shines as a cynical bystander discussing God with Jess Rivera, who plays a convincing messenger wanting to “spread the word of God.” Isaiah Mason Harvey is superb in his shorts and works well with the material and with his fellow cast mates making him one to watch. Along with the aforementioned, Carolyn Koch, Autumn Koehnlein, Megan Livingston, and Michael Makar round out this phenomenal cast and all give fantastic showings.

Final thought… Love & Information is a frenetic, intense piece that requires your utmost attention because if you blink, you might miss something and, though it’s not my cup of tea, the production itself is well put-together. Being so fast-paced, it seems a bit jumbled, at times, and the saving grace is that it is broken up into vignettes; some a few minutes, some no more than 30 seconds, and you get a lot of information (and love) thrown at you in 90 minutes. Overall, the performers are top notch and the staging is superb. Though I don’t like the material, I was certainly entertained and the performance is well worth checking out.

This is what I thought of this production of Love & Information at Fells Point Corner Theatre.… what do you think?