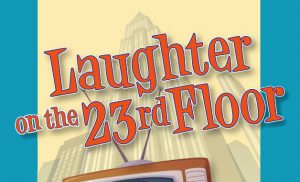 Run time: Approx. 2 hours and 15 minutes with one intermission 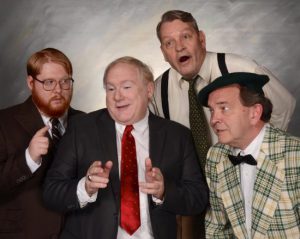 Cockpit in Court Summer Theatre’s Laughter on the 23rd Floor (written by Neil Simon and directed by John D’Amato) is a work of historical fiction, biography, and comedy. I have no personal knowledge of the historical parts, but it’s a great comedy. Expect a witty combination of wordplay, one liners, and slapstick in a world with artistic

John D’Amato’s staging deserves a shout-out in Cockpit in Court’s upstairs cabaret  theater, which is an intimate space with small numbered tables (Side note: You can bring food in; no table service). The stage is set up in the round in the center of the room, raised slightly off the ground and the center stage becomes the office for a team of TV comedy writers. Of the four corners of the stage, the characters enter through one, throw stuff out the window at the end of another, scribble on a third, and literally punch through the fourth. D’Amato uses the space effectively and the ensemble moves around so well you never feel anyone’s got their back to you.

Laughter’s core comedy derives from a combination of slapstick antics and the different eccentric writers (the funniest is Tirrell Bethel as Ira Stone) playing off each other and their boss —Max Prince (Thomas Hessenauer). Max Prince is a substance-abusing and angry star who’s losing his touch. He can barely understand what happens around him and lives in a semi-delusion world of cryptic classical allusion, paranoia about NBC cutting his show, and rage. However, he loves his show and his writers, and doesn’t want to fire his writers even as the show fails. Hessenauer’s performance gives the show the heart the comedy needs. 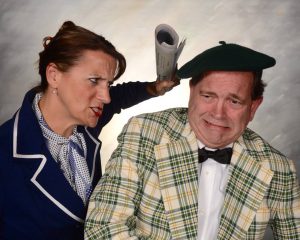 Laughter is also historical fiction set in the 1950s. The Second Red Scare is happening and the characters worry about (and deeply hate) Joseph  McCarthy. Stalin’s death happens, the USSR gets the hydrogen bomb, and, in the end, the characters reference that the Senate censors McCarthy. Though it’s not a huge part of the story, the Neil Simon cleverly leaves it in the background to establish the setting.

Laughter is also thinly veiled biography with Max Prince is a stand-in for Sid Caesar, Ira Stone for Mel Brooks, Lucas (the narrator) for Neil Simon himself, etc. It’s literally one-to-one. Look it up and you’ll see the not-so-well-hidden similarities. I’m not familiar enough with the history to know how well Neil Simon described what “really happened”, but this is his portrayal of his workplace full of famous comedians.

The historic and biographic elements make the show’s most invisible decision leap out at fans of history. Laughter refreshingly uses color blind casting. As a result, a play located in pre-Civil-Rights 1952 has two African-American writers on the team and makes tons of vaguely-racist ethnic-based jokes, and ignores race. The characters in fact rag on Ira Stone (played by African-American Tirrell Bethel) being Jewish (along with other character’s Russian and Irish heritage). From the dialogue, you’d never realize race relations were even a thing and that’s because the playwright’s Lucas (i.e Neil Simon) and Ira Stone (i.e. Mel Brooks or maybe Woody Allen) were Jewish in the original. 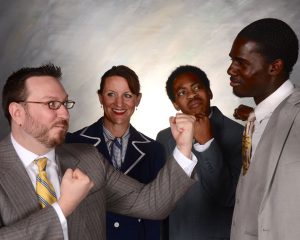 The Cast of Laughter on the 23rd Floor. Credit: Cockpit in Court

If you see this play as historical fiction / biography, that casting decision breaks the suspension of disbelief. Race relations were the defining issue of the 1950s. Think Martin Luther King, Brown v. Board of Education, school desegregation, Selma, etc. You can’t set a show in the 1950s and pretend it wasn’t a thing. But that’s exactly what this production does.

This production of Laughter does this because it cares more about the comedy than the history. They cast Tirrell Bethel because he’s an awesome comic actor who turns Ira Stone into the funniest role on set. He makes the comedy pop and that’s more important than accurately portraying racial attitudes in 1952. I watch to be entertained, not educated. You just need to suspend your historic disbelief a little.

For the non-historically inclined, don’t worry. You don’t need to know (or care) about the history to get the jokes. This isn’t historical humor like Death Of Stalin. It’s a story about the antics of TV comedy writers and their half-crazy-but-very-funny boss. The performances are admirable, the script is witty and engaging, and the gives us a rare glimpse into the office of TV comedy writers. It’s got heart and humor and is definitely worth seeing.

Laughter on the 23rd Floor will run through July 1 at Cockpit in Court Summer Theatre, CCBC Essex, Robert and Eleanor Romadka College Center, Cabaret Theatre. For tickets call the box office at 443-840-ARTS (2787) or purchase them online.

1 thought on “Review: Laughter on the 23rd Floor at Cockpit in Court Summer Theatre”