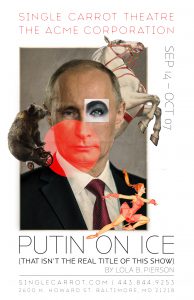 Running Time: 90 minutes with no intermission

Vladimir Putin is a curious character. Working his way up from the ranks of the KGB all the way up to the presidency of Russia, we all have our own opinions of him and some are more vocal about them than others. In the media, he’s portrayed in many different ways and his antics are regularly reported such as his stints practicing Judo or donning an ice hockey uniform and skating around the rink. Whatever you think about him, Single Carrot Theatre’s (with The Acme Corporation) latest offering, Putin on Ice (This Isn’t the Real Title of This Show) by Lola B. Pierson, Directed by Yury Urnov, with Lighting Design by Eric Nightengale, Sound Design by Steven Krigel, and Video Design by Nitsan Scarf, attempts to give a few facts and explanations about this complex, sometimes absurd man and through the style of Absurdist Theatre, actually makes for an charming, thought-provoking evening of theatre. 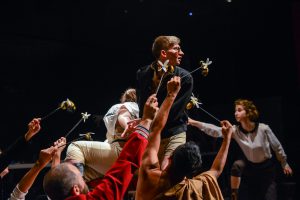 I’ve got to admit. I do, in fact, have a strong dislike of Theatre of the Absurd, but… I can definitely appreciate it and this production is so tight and engaging, I’m able to appreciate it even more. From what I could gather, Putin on Ice (This Isn’t the Real Title of This Show) is trying to send the message that Putin is everywhere, no matter what the situation may be. It’s absurd, of course, but stranger things are possible, right? Each actor takes on a persona of the president and the ensemble performs through different scenarios to explain how this is possible and if it weren’t for the energized, polished performance, I probably would have taken them up on their offer that I could leave at any time, but… I didn’t. I was enthralled with this performance and the technical aspects involved that I sat through the entire 90 minutes and was thoroughly entertained. 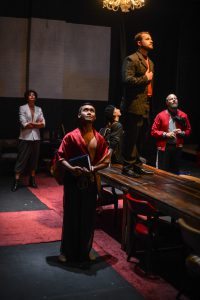 Lighting and Sound Design by Eric Nightengale and Steven Krigel, respectively, are two aspects of this production that shine through and pull this piece together. I’d compare Nightengale’s design to any big professional theatre out there today. He creates a night-club like atmosphere, for most of the show, but also manages to tone it down for more “serious” parts and it all works seamlessly. He knows his space and the staging well and keeps everything moving along nicely, setting the mood for each scene. Working in tandem with Nightengale’s Lighting Design, Krigel’s Sound Design is on point and impeccable. With appropriate sound effects, and the use of a live mic, Krigel’s work adds great value to this production. Both Nightengale and Krigel should be applauded and commended for their work on this piece. Kudos for a job well done!

Another technical aspect for this production is Video Design by Nitasan Scharf. Video and images play a huge part in this production and Scharf has put together a perfect design to help tell the story and move it along. I can only imagine the hours put into programing text and finding images that coincide with the onstage action but Scharf has done a splendid job and it’s clear his hard work and efforts have paid off. 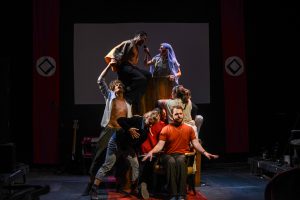 Jarod Hanson serves has Movement Director of this production and, though most of his work it seems happens at the beginning and during transitions, it is stellar. The ensemble is tight and polished and… that beginning. The movement, lights, and sound really get this production started with a bang and it keeps going from there. I gotta say, I am thoroughly impressed with the movement and choreography that goes into this piece and keeps it high-energy. I tip my hat to Hanson for his work on this production.

Yury Urnov takes the helm of this production and his Direction is spot on in, not necessarily telling a story, which I’m sure he can do just fine, but in getting the message across in this crazy style of theatre. I usually see Theatre of the Absurd as an art installation with people moaning and rolling around on the floor, however, not so much the case with this production. I was able to follow along easily and his staging keeps the energy up and the audience engaged. It’s clear he understands the style and the material and presents it in a way that is not too far “out there” and the comedy is not buried under pretentiousness. Urnov seems to be able to take this piece seriously, but the comedic aspects are not lost to him, at all. His casting is on point and the production, as a whole, with so many different aspects, works perfectly. 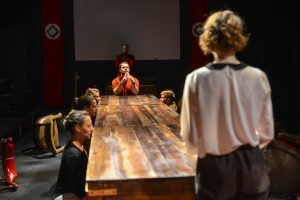 One of the aspects I enjoy most about this production is that it is truly and ensemble piece where everyone is working together with no lead or featured character. The entire cast works well with and off of each other making for a smooth flowing and sophisticated production. Tania Karpekina (as Herself) starts us off speaking only in Russian and it sets the mood for the entire piece. I don’t speak Russian, but that was OK as her performance and delivery of her dialogue was good enough to keep me in the loop (that’s to say, I understood what she was saying enough to follow along, of course). All of the Putins: Baby Putin (Molly Cohen), Hockey Putin (Paul Diem), Judo Putin (Alix Fenhagen), Military Putin (Sophie Hinderberger), Putin with the Animals (Ben Kleymeyer), Putin with the Birds Separately (Meghan Stanton), Party Putin (Matthew Shea), Religious Putin (Mohammad R. Suaidi), and Drag Putin (Kaya Vision) all work hand in hand to relay this message to the audience and they do it skillfully and honestly with superb delivery of the dialogue and appealing staging. There’s even an impressive musical number with Paul Diem on Bass, Meghan Stanton on Piano, Matthew Shea on Trumpet, and Mohammad R. Suaidi on percussion, with vocalists Molly Cohen and Kaya Vision that brings the house down and these actors are playing their own instruments and singing live.

Overall, I may not have liked the style of theatre for this production, I cannot deny the impeccable performances and superb production and technical aspect that makes this a successful production.

Final thought…Putin on Ice (This Isn’t the Real Title of This Show) isn’t my cup of tea but it is a very polished, well-put together production that Single Carrot Theatre should be proud of and applauded for. The performers are dedicated and have a solid grasp on Theatre of the Absurd. The mulit-media aspect keeps it engaging and interesting and the use of sound and light is enveloping keeping the audience in the heart of the piece. It’s a political driven work but the author is wise enough to let people know information is just being presented but, in the end,, the individual leaves with questions to think about and come up with his or her own opinions. It’s an innovative, creative experience that you should check out this season. Just remember… you are free to leave at any time.

This is what I thought of Single Carrot Theatre’s production of Putin on Ice (This Isn’t the Real Title of This Show)… What did you think? Please feel free to leave a comment!

Putin on Ice (This Isn’t the Real Title of This Show) will play through October 7 at Single Carrot Theatre, 2600 North Howard Street, Baltimore, MD. For Tickets, call the box office at 443-844-9253 or purchase them online.